Importance Of Inheritance In C++ With Examples:

Inheritance is one of the most important features of object-oriented programming.

The class whose properties are acquired is called the base class or parent class or superclass. When one class acquires or inherits another class, then all the properties and methods of the base class are available for the derived class, so that we can reuse this code. 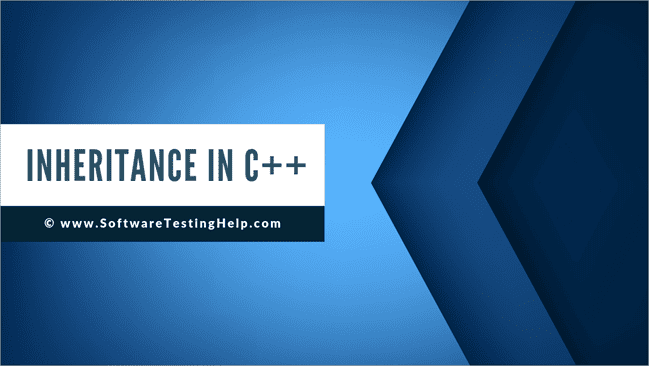 Why Do We Need Inheritance?

Consider a group of vehicles like car, bus, jeep, etc. Each of these vehicles will have properties and methods as indicated in the below diagram.

If we are required to implement individual classes for the above vehicles, we can see that in all the three classes, we will have to write the same code as all the three types of vehicles more or less exhibit the same properties. This will make our program inefficient and cumbersome as there will be a lot of duplicate code.

Instead of writing a duplicated code like above, we can implement the feature of inheritance to prevent the code from duplicating and also write a single piece of code and use it in all the three classes. This is pictorially represented as below. 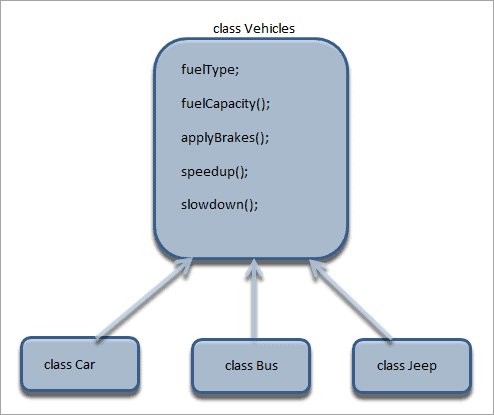 Hence, we just need to write the common code only once and all three classes; Car, Bus and Jeep will acquire it.

Thus the main advantage, we get by inheriting the existing classes or designing inheritance mechanism is the reusability of code.

The general format for inheriting a class is:

The “access_specifier” shown in the above declaration of inheritance, can have their values as shown below. 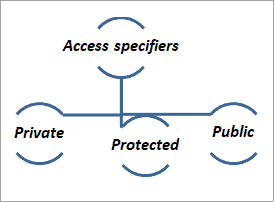 Depending on the access_specifier specified when we inherit the class, we have various modes of inheritance as listed below.

When public access specifier is specified, the public members of the base class are inherited as public while protected members are protected. Private members remain private. This is the most popular mode of inheritance.

Private inheritance does not inherit anything. When private access specifier is used, public and protected members of the base class also become private.

Note that when we use private access specifier for the base class, none of the base class members are inherited. They all become private in the derived class.

Given below is the tabularized representation of all the access modes and their interpretation for inheritance.

Order Of Constructors/Destructors In Inheritance

The output of this program shows the order in which the constructors are called.

But the question remains as to why base class constructor is called while constructing the derived class objects?

As a result, the entire object will not be created efficiently. This is the reason for which all the base class constructors are called first when a derived class object is created.

Depending on the way in which the class is derived or how many base classes a class inherits, we have the following types of inheritance as depicted in the figure below. 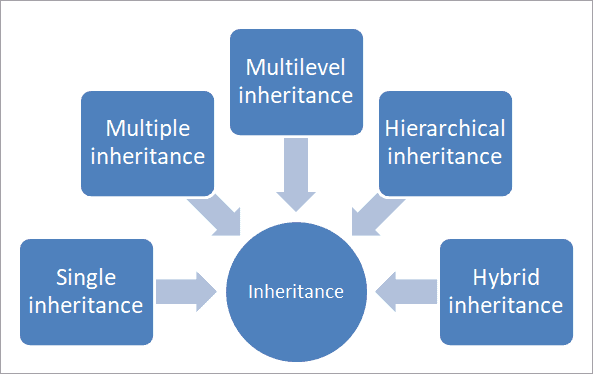 We will explore each of these types in our next tutorial on “Types of Inheritance”.

When our implementation involves templates, then we need to inherit or derive from template classes, and we make use of template inheritance there.

Let us directly jump to a programming Example to better understand the inheritance using templates.

In the above program, we have a template named basecls_Template which defines the class template for the base class. Next, we define a class derivedcls_Child which we want to derive from a template class.

But note that the class basecls_Template is only a type and not a class. Hence, we cannot derive the class derivedcls_Child from this template.

Therefore if we declare the child class as:

This will result in an error. The reason being basecls_Template is a data type and not class. Thus in order to inherit the members of basecls_Template, we should first instantiate it before we derive from it.

In this statement, we have instantiated the template basecls_Template to a character class template. Once we use this instantiated template class, then the other things following that like creating and using objects coincide with the usual inheritance working.

So far we have seen all about inheritance relationships. Inheritance basically depicts the kind of relationships wherein the relationship indicates a part. For Example, a Snake is a kind of a Reptile. We can also say Reptile is a part of Animal class.

In conclusion, inheritance indicates “IS-A” kind of relationships wherein we can say that the derived class is a part of the base class.

We can also represent relationships as a whole. For Example, if we say Salary class is a part of Employee class, then we are not representing it properly. We know that Employees has a salary. Thus it is more convenient to say “Employee has a salary”.

Similarly, if we take the Vehicles class as an example, we can say that Vehicle has Engine or Vehicle has chassis. Thus all these relationships depict “HAS-A” relationships that represent a whole object contained in another class. This is defined as Composition.

We can represent the composition diagrammatically as shown below: 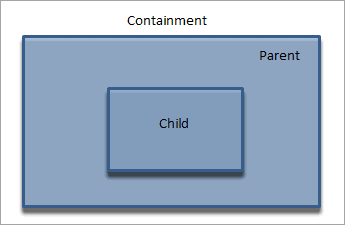 The composition is also termed Containment. In the above representation, we have shown a parent class. In contrast to inheritance, we include a child class object inside the parent class. This is containment or composition.

Let us take a programming Example to understand this.

How Should We Decide Between Composition And Inheritance?

Both promote code reusability. Inheritance may make code bulky as the solutions get complex but at the same time, it also allows us to extend the existing code. Thus, we should use inheritance when our requirement is to modify and use the properties and method of another class inside the new class.

In other words, when we want to add more properties and extend the existing class. On the other hand, when we do not want to modify the properties and behavior of another class, but simply use it inside the class, we go for composition.

Thus the best decision is as to whether to use composition or inheritance will be made by weighing the pros and cons of both the techniques for the particular situation.

We also studied about templates and inheritance. We need to instantiate a template before we can use it in inheritance as the template itself is a data type and we cannot inherit from a data type.

The composition is another type of class relationship and we need to know the exact situation first and then only we can decide whether to use composition or inheritance.

In our upcoming tutorial, we will see more about the types of inheritance.