STH is coming up with another testing tool tutorial. You know how detailed and useful these are. The tool this time is SoapUI, SoapUI Pro and all the way.

We suggest that our readers should start learning SoapUI – the most used web services API testing tool, with this SoapUI tutorials series.

Since this is a highly technical and a somewhat specialized form of testing we are talking about, it is important that we lay some groundwork that will lead the way to easily mastering the concepts. 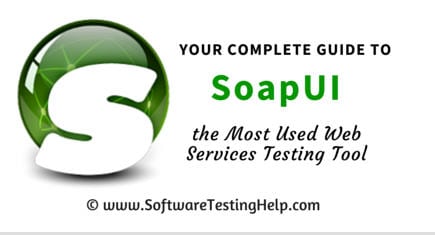 Here is what you will learn in this comprehensive SoapUI Tutorial series:

=> First get and install pro version from here.

In this process here in this tutorial, we are going to discuss web services in detail.

Nowadays web services play a major role in Internet applications. Let us now take some time for a brief introduction of the web services. For enhanced expertise in web services knowing HTML and XML mark up languages is important as the Web Services are created and implemented with via these languages.

What are Web Services?

Web services are web components that transfer data between client and server. The client sends a web request to the server and the server then responds to the client. This response will differ based on the web service request type.

Let’s look at an example: A flight ticker booking application that runs in City 1 and is being accessed from City 2 to book a ticket. A user enters all the information such as boarding point, destination point, date of journey etc, and then as soon as the “Book Now” button is clicked, the web service from City 1 gets invoked and it passes all the information that is entered to the application server that processes the user request. The Reservation application will then send a response to the User’s request.

All these activities can be seen through SoapUI request and response screens. SoapUI helps us to evaluate these web services.

Now let’s see the important components of the web services. They are,

A WSDL is a document that should be written using XML. This document describes the following details about the web service:

Each of the above information is represented as a tag in the WSDL file, such as: 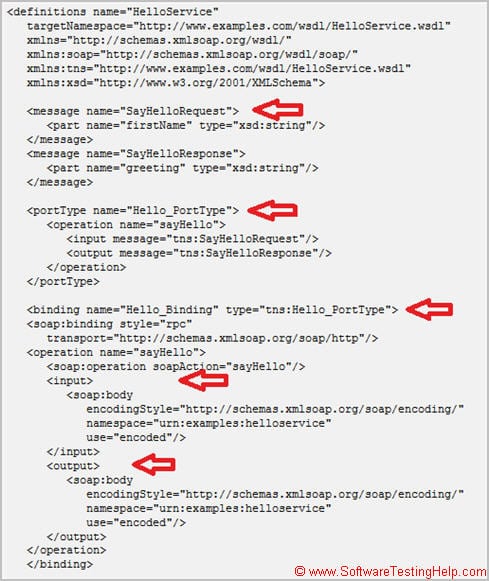 Your WSDL file should follow the W3C standard as above. Through web services, we can convert into a web based application. Web services are constructed on top of XML, HTTP, TCP / IP, Java, HTML and so on. Since web services are XML based language so that we can have these applications as local, distributed and web-based environments.

This is a global repository where we can search the web services spread over the globe. In order to get or search web services just visit http://uddi.xml.org/ website. Here you can also register your own web service and make it available to global users.

UDDI is the place where the WSDL is described in detail. This will communicate through the SOAP protocol which will be explored later in this tutorial. Say, for example, if you wish to advertise your products to the global customers you could create a web service and host it through UDDI. This can now be accessed by global users and from there the business could be established.

Generally, it uses XML based data to interact with web applications.

Here are some points to remember:

RPC (Remote procedure calls) are sometimes blocked by firewalls and proxy servers. To overcome these issues, SOAP was designed. There are some standard rules to be followed while building SOAP requests.

As you can see, a SOAP document must contain the following elements:

The above said elements should be declared with default namespace for the SOAP envelope.

Generally, a protocol is a set of standard rules that transfer the data between two regions on the Internet over the web services. There are many protocols that are used in the Internet applications. They are, Transmission Control Protocol (TCP) which serves as a packet between two connections. Internet Protocol (IP) that sends and receives the messages between two destinations.

Let us see some other important protocols:

These protocols are used according to the requirements.

RDF contains the description of the web resources such as title, author, content, and copyright information. This framework was designed so that computers can be read and understood easily by the web.

RDF data can be transferred between different types of computers using different operating systems and programming languages. Generally, RDF uses Uniform Resource Identifiers (URIs) on the web and it describes the resources along with the property and property values.

Take a look at the sample RDF document to understand better:

XML (eXtensible Markup Language) is a markup language that is used for storing, sharing and formatting data. In general, an XML document is built by the tags. Let us see the sample XML content for a user’s personal information.

Meaning of “eXtensible” and “Markup”:

In the above sample, First name, Last name, Address etc. are enclosed by less than (<) and greater than (>) symbols. These labels are known as tags and the one with the forward slash (/) along with the text, that is called closing tag. Tags are also called as mark-ups. These are customized as needed. This customization is not possible in other markup languages like SGML, HTML and so on. This is why XML is an extensible language.

XML focuses on the data for storing, sharing and exchanging as required, and HTML deals with the format of the data like applying colours, adding images, changing fonts, styles and so on.

XML and HTML can be used together in applications. For example, if you take a book, there will be textual data and graphical representation formatted. Hypothetically, XML can handle storing actual data and HTML applies the format for the content. Thereby the textbook could have information as well as attractive images and colours.

How XML works with SoapUI?

So far in this tutorial, we took a look at:

Next tutorial => In the next topic, we will learn the features of SoapUI and SoapUI Pro version in detail.

Feel free to post all your queries about web services and SoapUI tool. We will answer all these questions in the coming tutorials.

This is the powerful next generation of SoapUI version with many core functionalities.

=> Before going into more details about these SoapUI pro tutorials, I suggest to install the SoapUI Pro version from here.

Tutorial #15. Storing Request and Response in a File