An In-Depth Look At Loops In C++ Along With Its Types.

In addition to Decision-making Constructs that we have seen in our last tutorial, there may arise some situations wherein we have to execute a block of statement repeatedly. 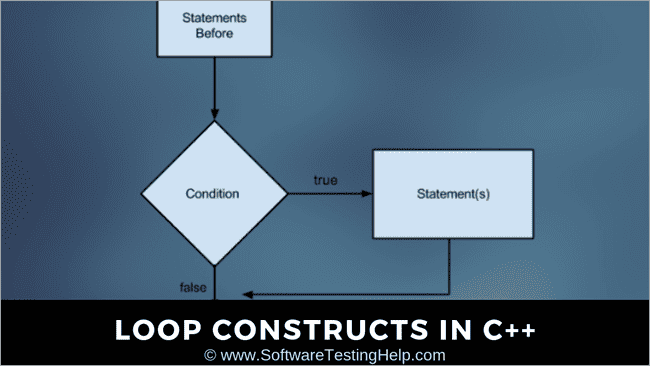 The construct that executes statements repetitively is the “for” loop.

The general syntax of for loop is:

When statement block is executed, the loop variable is incremented as per the increment specified and the next iteration is started. This way, the loop completes the iterations until the condition is fulfilled. Then the “for” loop is exited.

This is the flow diagram for the “for” loop construct.

Here we print the 2’s multiples up to 20 using a “for” loop. Note that it is convenient to use when we know the number of iterations beforehand.

C++ provides yet another loop construct that allows us to execute a set of statements in a repetitive manner. This is ‘while’ loop.

The general syntax of ‘while’ loop is:

A ‘while’ loop repeats a set of the statement as long as the condition is true. So before the start of every iteration, the condition is evaluated. If it is fulfilled, statement_block is inside while loop. Otherwise, the loop is exited.

Below given is the flow diagram of “while” loop.

Given below is an example program to demonstrate while loop:

Inside the loop, we increment the loop variable. The code inside the “while” loop is executed as long as the condition is satisfied.

When we are not sure about the exact number of iterations that the code will be executed for, we go for “while” loop.

The general syntax of the “do-while” loop is:

The flow diagram of Do While Loop:

Let us understand this with the help of an Example.

We have modified the same example as the previous loops. Note that the condition is checked at the end after the statement block is executed. This ensures that the loop is executed at least once before exiting.

Whenever we need to exit out of the loop/statement block without completing it or if we have to skip iteration, then we make use of two special statements i.e. break and continue.

This is required when we abruptly want to exit from a particular construct irrespective of the test condition.

Similarly, if we want to skip a particular statement or jump to the next iteration without completing the current iteration, then we use the “continue” statement. In other words, “continue” is used to continue the flow of the program to the next step.

Given below is the flow diagram of Break and Continue statements 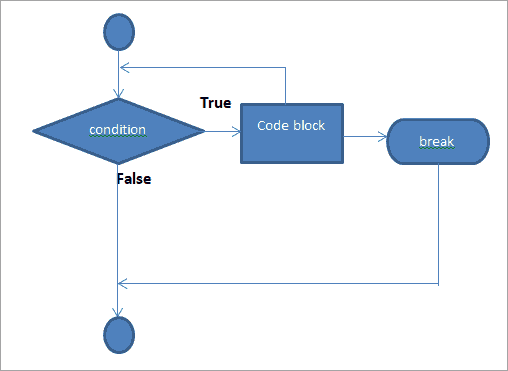 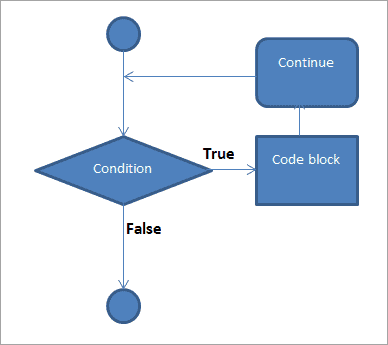 Let us see an example of using the break and continue statements in the code.

Once again we have taken the same example of printing 2’s multiples up to 20. In this case, we have initialized the loop variable to zero. Then we use an infinite while loop and inside the loop, we skip the first iteration using the continue statement.

Next, we use the break statement to exit out of the loop the moment the loop variable becomes greater than 20.

When the expression matches any case of the switch statement, the code for that particular is executed and then the control passes to the cases following the matched case. This way, after matching the case, all subsequent cases are also executed before exiting the switch statement. This results in the erroneous output.

In order to prevent the subsequent cases from executing, we introduce the break statement at the end of each case. This makes the controlled exit out of the switch statement once the matching case is found and code is executed.

For Example for(;;) will result in an infinite “for” loop.

While(;) or while(1) will result in while loop being executed indefinitely.

Infinite loops should not be encouraged in programming but if at all the need arises, we should be able to break out of the loop using a terminating condition inside the loop.

Infinite loops result in an error. We should be cautious while using the loop constructs in C++.

With this, we conclude this tutorial on loops in C++.

In our next tutorials, we will discuss arrays and strings in detail followed by functions in C++.