What is Software Testing?

What is Manual Testing?

This is the most in-depth series of tutorials on Software Testing. Go through the topics mentioned in this series carefully to learn the basic and advanced testing techniques.

This series of tutorials would enrich your knowledge and will, in turn, enhance your testing skills.

Get ready to take a look at the 1st tutorial in this Manual Testing series !!!

And how will you know what is the expected behavior?

Think yourself as an end-user of what you are going to test. After that, you are not bound, to the software requirement document or words in it anymore. You can then understand the core requirement and not just check the system’s behavior against what is written or told but also against your own understanding and against things which are not written or told.

At times, it can be a missed requirement (incomplete requirement) or implicit requirement (something which doesn’t need separate mention but should be meet), and you need to test for this too.

Further, a requirement need not necessarily be a documented one. You can very well have knowledge of the software functionality or you can even guess and then test one step at a time. We generally call it ad-hoc testing or exploratory testing.

Let’s have an In-Depth Look:

First, let’s understand the fact – Whether you are compare testing a software application or something else (let’s say a vehicle), the concept remains the same.  Approach, tools, and priorities might differ, but the core objective remains the SAME and it is SIMPLE i.e. comparing the actual behavior with the expected behavior.

Secondly – Testing is like an attitude or mindset that should come from within. Skills can be learned, but you will become a successful tester only when you have a few qualities within you by default. When I say testing skills can be learned, I mean focused and formal education around the software testing process.

But what are the qualities of a successful tester? You can read about them at the link below:

I highly recommend going through the above article before continuing with this tutorial. It will help you compare your characteristics against the ones that are expected in the Software Tester’s role.

For those who don’t have time to go through the article, here is a synopsis:

“Your curiosity, attentiveness, discipline, logical thinking, passion for work and ability to dissect things matters a lot to be a Destructive and Successful Tester. It worked for me and I strongly believe that it will work for you as well. If you have these qualities already, then indeed it got to work for you too.”

We have talked about the core pre-requisites of becoming a software tester. Now let’s understand why Manual Testing has and would always have its independent existence with or without Automation Testing growth.

Why Manual Testing is Required?

Do you know what is the best thing about being a Tester, that too a Manual Tester?

It is the fact that you can’t depend only on skillset here. You got to have/develop and enhance your thought process. This is something you can’t really buy for few bucks. You yourself have to work on it.

You will have to develop the habit of asking questions and you will have to ask them every minute when you are testing. Most of the times you should be asking these questions to yourself than to others.

I hope that you have gone through the article that I recommended in the previous section (i.e the qualities of highly effective testers). If yes, then you would know that testing is considered a thought process and how successful you will be as a tester completely depends on the qualities that you possess as a person.

The diagram given below represents the Life of a Tester: 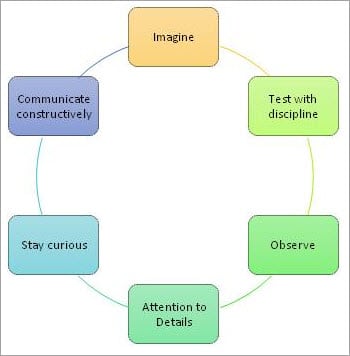 Read those four bullet points mentioned above once again. Did you notice that I kept it very short but still highlighted the richest part of being a manual tester? And did you noticed the bold highlighting over a few words? Those are precisely the most important qualities that a manual tester needs.

Now, do you really think that these acts can be completely replaced by anything else? And the hot trend today – can it ever get replaced with automation?

In SDLC with any development methodology, few things always remain constant. As a tester, you will consume the requirements, convert them into Test Scenarios/Test cases. You will then execute those test cases or directly automate them (I know a few companies do it).

When you automate it, your focus is steady, which is automating the steps written.

Here, you not only focus on executing the written test cases, but you also perform a lot of exploratory testing while doing so. Remember, you are curious? And you will imagine. And you won’t be able to resist, you will indeed do what you imagined.

The image given below depicts how Test Case writing is simplified: 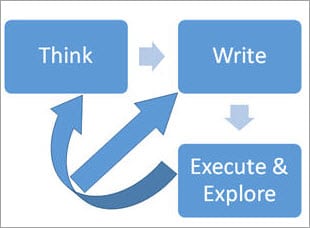 Oops, I accidentally hit the ‘Enter’ key. Let me check what happened. OR there is a submit button, I am gonna double click it. Not satisfied. I click it multiple times, too fast.

Did you notice? There are so many possible user actions, both intended and non-intended ones.

You won’t succeed in writing all the test cases which cover your application under test 100%. This has to happen in an exploratory way.

You will go on adding your new test cases as you test the application. These will be test cases for bugs that you encountered for which previously there was no test case written. Or, while you are testing, something triggered your thought process and you got a few more test cases which you will like to add to your test case suite and execute.

Even after all this, there is no guaranty that there are no hidden bugs. Software with zero bugs is a Myth. You can only target to take it close to Zero but that just can’t happen without a human mind continuously targeting the same, similar to but not limited to the example process we saw above.

At least as of today, there is no software that will think like a human mind, observe like a human eye, ask questions and answer like a human and then perform intended and non-intended actions. Even if such a thing happens, whose mind, thoughts and eye will it mimic? Yours or mine? We, humans, are also not the same right. We all are different. Then?

Need for Manual Testing when Automation is Around:

Automation Testing has its own share of glory these days and will have even more in the upcoming years but, it simply can’t replace manual QA testing (read human/exploratory testing).

You must have heard before- ‘You don’t automate testing, you automate checking’. This sentence speaks a lot about where manual QA testing stands with Automation testing around. Many big names across the globe have written and spoke about this topic, so I won’t stress much on this.

Testing can be replaced by a tool/machine which will be able to absorb the details, process them, command actions and perform them like a human mind and human, and all this at runtime and in all possible contexts. This tool again has to be like all possible humans.

So in short, human testing can’t be replaced. Maybe some Hollywood sci-fi flick in a few years will look close to it, but in real life, I can’t see it coming for a few hundred years, that I can imagine. I won’t write it off forever as I believe in endless possibilities.

On a separate note, even if it really happens after a few hundred years, the picture I can imagine is that of a scary world for sure. Age of Transformers. :)

I said before and I’m saying it again that Automation can’t be ignored anymore. In the world where continuous integration, continuous delivery, and continuous deployment are becoming mandatory things, continuous testing can’t sit idle. We have to find out ways on how to do it.

Most of the time, deploying more and more workforce doesn’t help in the long run for this task. Hence, the Tester (Test Lead/Architect/Manager) has to decide cautiously on what to automate and what should still be done manually.

It is becoming extremely important to have very precise tests/checks written so that they can be automated without any deviation to the original expectation and can be used while regressing the product as a part of ‘Continuous Testing’.

Note: The word continuous from the term ‘Continuous Testing’ is subjected to conditional and logical calls similar to the other terms that we used above with the same prefix. Continuous in this context means more and more often, faster than yesterday. While in meaning, it can very well mean every second or Nano-second.

Without having a perfect match of Human Testers and automated checks (tests with precise steps, expected result and exit criteria of said test documented), achieving Continuous Testing is very difficult and this, in turn, will make continuous integration, continuous delivery and continuous deployment more difficult.

I purposely used the term exit criteria of a test above. Our automation suits can’t be similar to the traditional ones anymore. We have to make sure that if they fail, they should fail fast. And for making them fail fast, exit criteria too should be automated.

Let’s say, there is a blocker defect wherein, I am unable to login to Facebook.

Login functionality then has to be your first automated check and your automation suite should not run the next check where login is a pre-requisite, like posting a status. You very well know it is bound to fail. So make it fail faster, publish the results faster so that the defect can be resolved faster.

Next thing is again something that you must have heard before – You cannot and should not try to automate everything.

Select test cases which if automated will benefit considerably to Human Testers and has a good Return on Investment. For that matter, there is a general rule which says that you should try to automate all your Priority 1 test cases and if possible then Priority 2.

Automation is not easy to implement and is time-consuming, so it is advised to avoid automating low priority cases at least till the time you are done with the high ones. Selecting what to automate and focusing on it improves the application quality when used and maintained continuously.

I hope by now you must have understood why and how badly manual/human testing is required to deliver Quality Products and how Automation compliments it.

Accepting the importance of QA Manual Testing and knowing why it is special, is the very first step towards being an excellent manual tester.

In our upcoming manual testing tutorials, we will cover a generic approach for doing Manual Testing, how it will co-exist with Automation and many other important aspects as well.

I’m sure that you will gain immense knowledge of Software Testing once you go through the entire list of tutorials in this series.

We would love to hear from you. Feel free to express your thoughts/suggestions in the comments section below.

38 thoughts on “What Is Software Testing? 100+ Free Manual Testing Tutorials”