A Complete Overview Of Iterators In STL.

In this tutorial, we will look into the details of iterators, their types, advantages, and the various functions they support. 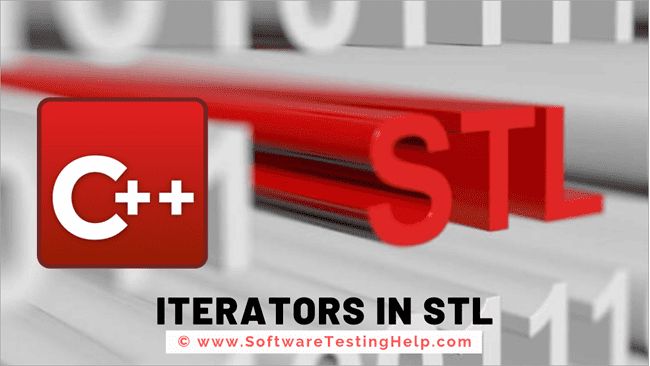 In STL, an iterator is an object that can be used to traverse through or step through the elements in the container by using a set of operators like increment operator (++) or dereference operator (*).

Iterators are crucial in STL programming as they play an important role in connecting the algorithms to the container in addition to accessing and manipulating the data stored inside the containers.

Depending on the functionality implemented by the iterators, they are classified as follows:

Below is the list of containers that use different iterators:

Some of the advantages of using iterators in programming can be summarized below:

As long as we use iterators to access elements in our program, we can just change the name of the container in our iterator definition and use the rest of the code in a similar way whenever we need to change the container.

This is especially useful in scenarios where we plan to replace a vector container using a list container. If in place of iterators we were using [] operator, the code to access elements would be useless when we change the containers.

#2) Ease And Convenience Of Programming

Iterators come with various in-built functions that aid us in traversing and accessing the contents of the container easily and conveniently.

For Example, we need not keep on checking the end of the list or array-like we have to do while using [] operators and we need to alter the program code like when we want to add elements, and we need to change them for a loop.

When using iterators we can directly access begin () and end () functions of the iterators without having to keep a tab on when we reach the end of the list and also we need not change them for a loop.

While using iterators we can easily and dynamically add or remove the elements in the container without having to shift the elements like we have to do in [] operators.

Let’s demonstrate this with the following Example:

As seen in the above example, we see that using iterators we can easily add or remove elements from a container (vector in this case), without having to resort to the complex programming of shifting elements and restructuring the container.

As iterators itself are built-in constructs, they support various operations that can be done on iterator objects. These operations/functions allow us to efficiently traverse through the range and also manipulate the elements inside the container.

Now we will see a few major operations that iterators support.

We will demonstrate the use of some of this function/operation in the following program:

Using next() the new iterator is at: 2
The position of new iterator using prev() is: 3
After the advance operation,itr1 is positioned at: 3

Using the above program we have demonstrated the use of various iterator operations.

Thus we have come to the end of this tutorial on Iterators.

So far we have discussed the basics of STL, from our next tutorial onwards we will begin with STL containers and their programming.