In this C++ Makefile tutorial, we will discuss the major aspects of Make tool and makefile including its advantages and applications in C++:

In any C++ project, one of the important goals is to simplify the building of the project so that we get all dependencies and project files in one place and execute them in one go so that we get the desired output with a single command.

At the same time, whenever any of the project files are modified, we do not have to go through the trouble of building the entire project again i.e. whenever a file or two are modified in the project, we rebuild only these changed files and then proceed with the execution.

These are exactly the features that are addressed by the “make” tool and “makefiles” in C++. In this tutorial, we will discuss all the major aspects of makefiles as well as their applications in C++. 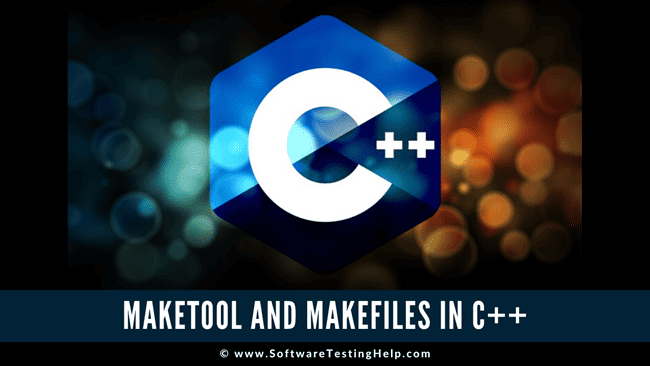 Make is a UNIX tool and is used as a tool to simplify building executable from different modules of a project. There are various rules that are specified as target entries in the makefile. The make tool reads all these rules and behaves accordingly.

For example, if a rule specifies any dependency, then the make tool will include that dependency for compilation purposes. The make command is used in the makefile to build modules or to clean up the files.

The general syntax of make is:

For example, if we want to execute rm commands to clean up files, we write:

A makefile is nothing but a text file that is used or referenced by the ‘make’ command to build the targets. A makefile also contains information like source-level dependencies for each file as well as the build-order dependencies.

A makefile typically starts with variable declarations followed by a set of target entries for building specific targets. These targets may be .o or other executable files in C or C++ and .class files in Java.

We can also have a set of target entries for executing a set of commands specified by the target label.

So a generic makefile is as shown below:

A simple example of the makefile is shown below.

In the above makefile, we have specified two target labels, first is the label ‘all’ to build executable from myprogram and mylib object files. The second target label ‘clean’ removes all the files with the name ‘myprogram’.

Let’s see another variation of the makefile.

The third variable ‘TARGET’ contains the name of the program for which we need to build the executable.

The measure advantage of this variation of the makefile is that we just need to change the values of the variables that we have used whenever there is some change in the compiler, compiler flags, or executable program name.

Example Of Make And Makefile

Consider a program example with the following files:

With the above-given .cpp and .h files, we need to compile these files separately to generate .o files and then link them into executable named main.

So next we compile these files separately.

Next, we link the object files together to generate the executable main.

Next, we need to decide which of the files we will have to recompile and regenerate when certain parts of the program are updated. For this, we will have a dependency chart that shows various dependencies for each of the implementation files.

Given below is the dependency chart for the above files. 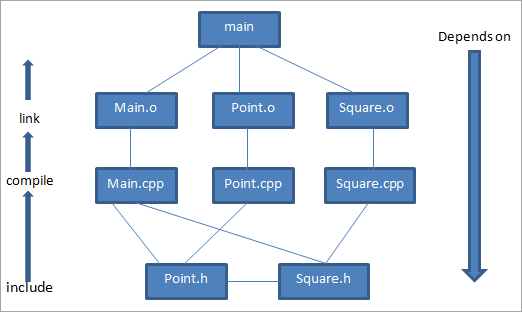 All cpp implementations use header files as shown in the above chart. As shown above main.cpp references both point.h and square.h as it’s the driver program and uses point and square classes.

Next file point.cpp references point.h. The third file square.cpp references square.h as well as the point.h as it will need a point as well to draw the square.

All the above explanations that we have given will work smoothly if there are few files in the project. When the project is huge and files are big and too many, then it becomes difficult to regenerate the files repeatedly.

Thus, we go for make files and we use to make a tool to build the project and generate the executable.

We have already seen various parts of a make file. Note that the file should be named “MAKEFILE” or ‘makefile’ and should be placed in the source folder.

Now we will write down the makefile for the above example.

We will define variables to hold the values of compiler and compiler flags as shown below.

Then we create the first target in our makefile i.e. the executable main. So we write a target with its dependencies.

Thus the command to generate this target is

Now to generate main.o, the target will be written as:

The command for this target is:

The next file point.o can be generated using the below command:

In the above command, we have skipped point.cpp. This is because make already knows that .o files are generated from the .cpp files, thus only .h (include file) is enough.

Similarly, square.o can be generated with the following command.

The entire makefile for this example will look as shown below:

Thus, we see that we have a complete makefile that compiles three C++ files and then generates an executable main from the object files.

Makefiles are a boon to software development. Using a C++ makefile, we can build solutions in lesser time. Also when a part of the project is modified, the makefile recompiles and regenerates only that part without having to regenerate the entire project.

C++ Makefile allows us to represent the project systematically and efficiently thereby making it more readable and easy to debug.

In this C++ Makefile tutorial, we have seen makefile and make tools in detail. We have also discussed how to write a makefile from scratch.