Gatling is an open-source testing framework based on Scala. It’s gaining a lot of popularity these days with more than 3 million downloads in the last 3 years.

It is available as an open-source as well as an enterprise variant called Gatling Frontline with more integrations and support from the Gatling team. But all practical use cases can be worked upon using the Gatling community edition which is free and an open-source. 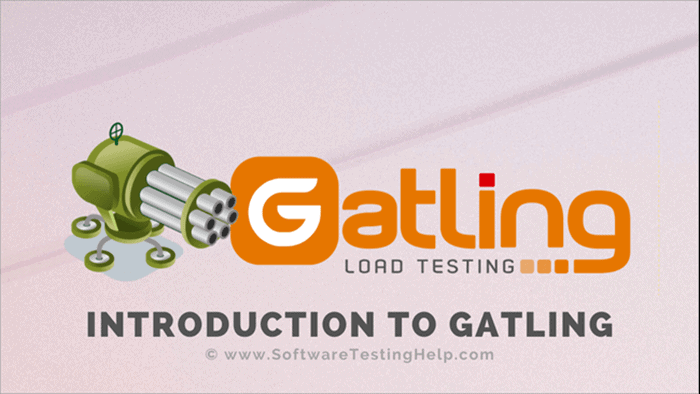 Let’s see the steps required to get started with Gatling. We will also cover some of the important features of Gatling as part of this tutorial.

Here is a video tutorial on Gatling Introduction:

Gatling can be installed in 2 different ways. This can be explained as follows:

#1) Using Gatling as a standalone tool, you can simply install the installer/application, using the official Gatling website and follow the installation instructions.

Please note that the installed zip folder contains both shell and batch files which makes Gatling suitable to be used across different operating systems like – Windows, MacOS, Linux/Unix, etc.

The installer is nothing but a Java-based Gatling script recorder, which records user actions through the browser in the tool and which could then be converted into a script or scenario that needs to be load and tested. We will see this in detail in the upcoming sections.

#2) Another way to install/use Gatling is by using it as a package through Maven/Gradle or through Scala build tools.

An important point to note here is that Gatling scripts are all Scala-based, hence creating a Scala-based project could use the Gatling library which can be imported by any build tools like Maven/Gradle or SBT.

Gatling has an advanced architecture based on the Akka toolkit and is fully asynchronous. This gives it an upper hand in comparison to other performance testing tools like JMeter where each thread corresponds to a single user.

Here, a single thread can simulate multiple users as it has a messaging architecture through the Actor model.
In a nutshell, a Gatling test can handle a number of concurrent users per machine as compared to other tools like Jmeter and hence results in a considerable saving in CPU and RAM.

Gatling scripts are written in Scala and have a friendly DSL which makes the scripts highly readable and less prone to errors. For more details around Gatling DSL, please refer here.

Gatling supports a wide variety of protocols including HTTP, HTTPS, and Web sockets. It also has extensions for load testing SQL queries/scripts.

Gatling provides out of the box support for creating detailed HTML reports for the scenarios that are executed and also has capabilities to apply assertions on the individual requests in scenarios – For example, Response times, JSON content validation, etc.

Gatling comes with an easy to use graphical test recorder which can generate simulation script by recording user activity or user actions on a web browser. The generated scripts are Scala-based scripts that could be executed at a future time and can be modified as per the requirements.

For creating sample simulation, we will use Gatling’s officially provided hosted application

We will be using Gatling’s simulation recorder to get started with creating load and doing performance testing. Before going further, let’s discuss the scenario where we want to load test.

The scenario is a use case that we are trying to load test. What this, it essentially means that we want to imitate a user action into a scenario or set of steps that need to be put under test.

For example, suppose a user accesses any eCommerce website like Amazon.com and searches for a product and adds it to the cart and finally checkout with the payment information.

In order to load test this complete scenario, from system or server perspective, we need to understand that it’s nothing but a collection or series of API calls that are being made to the backend server, and that’s what we want in the performance test.

For this example, we will use the below scenario on Gatling hosted application: 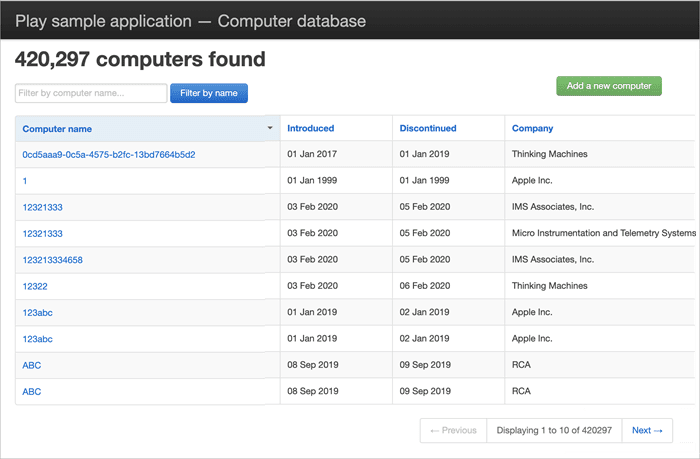 #3) Select Computer name as Apple and company name as “Apple Inc” from the dropdown as shown in the below image. 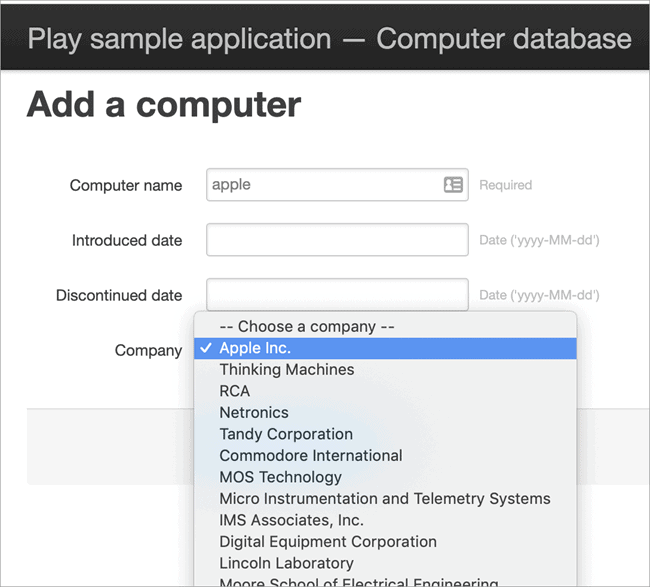 #4) Click on ‘ Create this computer’ after entering the details. 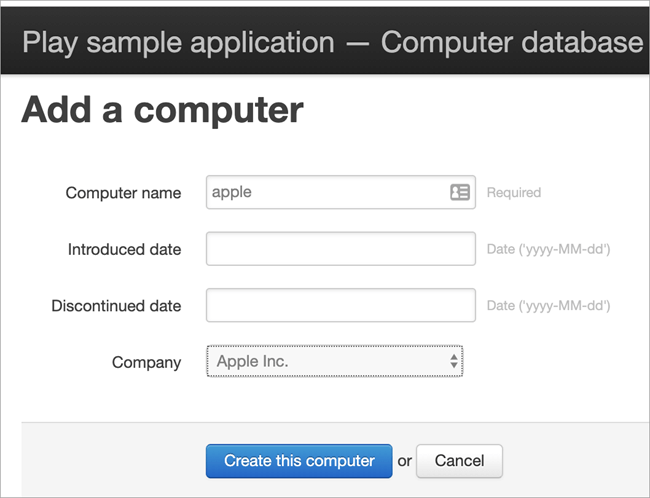 In this section, we will discuss how to set up the Gatling test recorder to create a simulation for the scenario that we have discussed in the previous section.

We will be using Gatling simulation recorder which is in a very simple form, an HTTP proxy – you must be familiar with other HTTP recording tools like Fiddler or Chrome Http proxy, etc. So, the Gatling recorder is similar to additional features of converting the recording into a test simulation script.

So let’s first see how to set up the Gatling recorder:

#1) Once the Gatling zip folder is installed, simply unzip the folder to the location where you want the Gatling to be installed.

#2) After this step, we need to set 2 environment variables named – GATLING_HOME (for Gatling home directory) and GATLING_CONF (for the config folder location of Gatling).

Depending upon the type of OS, (i.e. Windows or Mac or Linux), set these environment variables with below values:

Once the variables are set to validate, you can simply hit on the terminal the command – export | grep “GATLING” and the output should show the 2 environment variables that we have just set.

Below is the file structure of the bin folder:

#4) So, depending on the OS type, we can choose the filetype to execute for the running recorder. Please note that there are 2 files here that we will be using:

#6) If the environment variables are set properly, then the above command should open the Gatling script recorder.

#7) Notice the Http/https port in the recorder (default selection is 8000 or 8080) – this is the port where the Http traffic proxy listener of Gatling is configured. We can change this port number as per our convenience (or we can continue with default values).

#8) Now let’s configure the chrome proxy to listen to this port – i.e. essentially we want to route our Http traffic from the browser through this proxy listener or recorder.
Follow this link to set up a proxy on chrome for different OS.

#9) Once the port is configured, we will then execute our scenario on the Gatling hosted application.

#10) Before the scenario execution starts, we will first need to configure the package name and class name for the resultant test script and then start the proxy listener by simply clicking on the “Start” button in the script recorder. 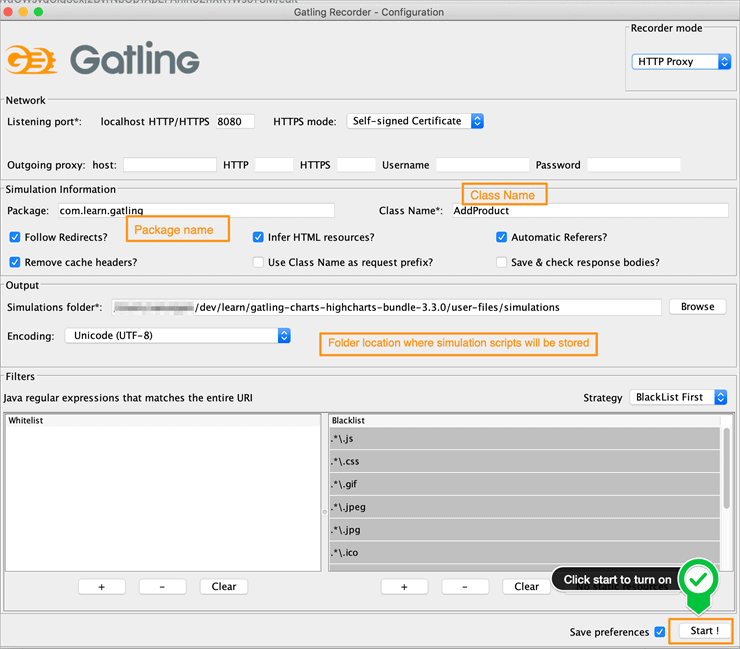 #11) As soon as the proxy recorder starts, a new window will show up, and essentially it captures all the requests that are fired when the scenario gets executed on the browser. 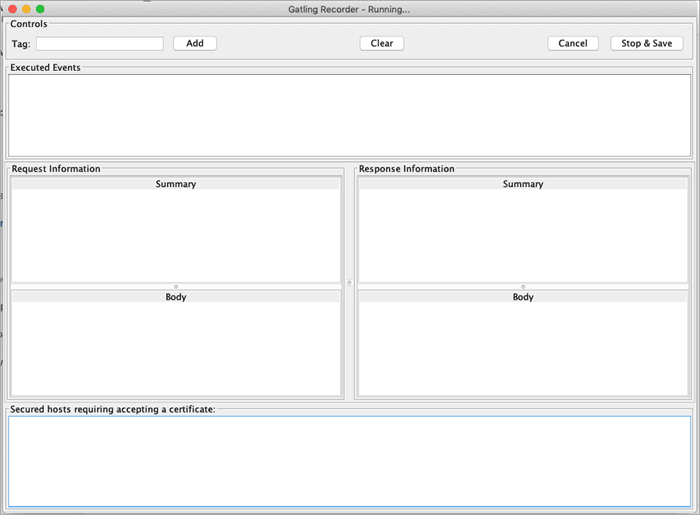 #12) Navigate to Gatling hosted application in the browser.

If you can see the request is recorded in the recorder window, that means that the proxy setup for browser is correct and Gatling recorder is now able to record the requests as per the test scenario that is being executed (if not go back to step #7 to fix the proxy configuration for browser/system). 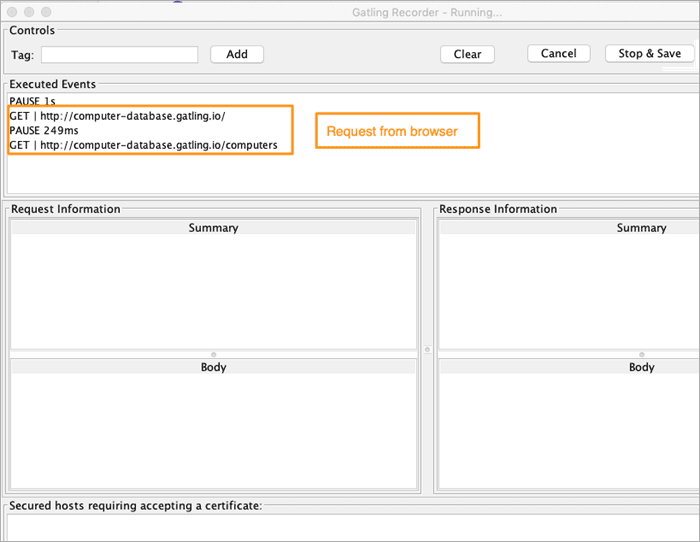 #13) Now, once we are sure that the setup is working fine, click on “Clear” to remove everything from the recorder and begin executing the scenario as mentioned below: 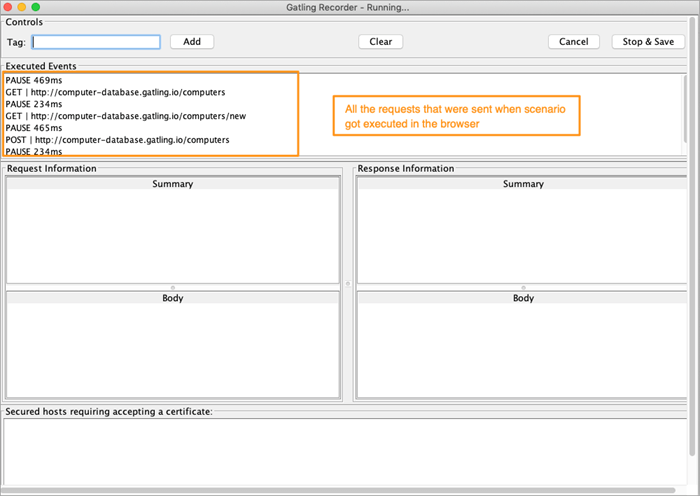 #14) In order to complete the script creation, click “Stop & Save” on the recorder window.

#15) The simulation script should get created in the directory or simulation folder that’s displayed on the Gatling recorder configuration screen. 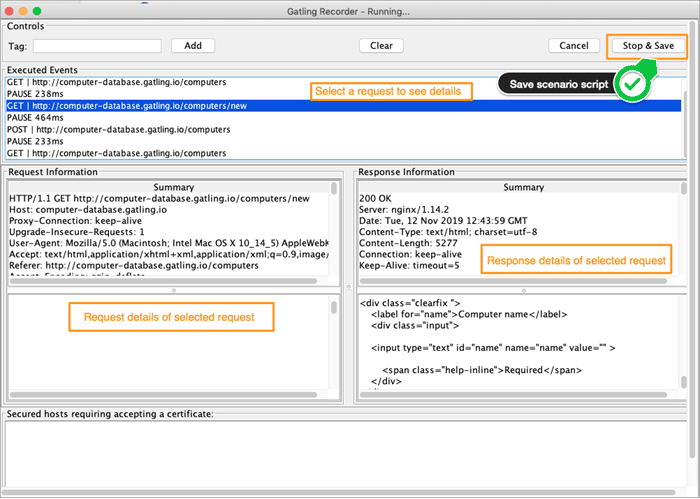 Once the script for the executed scenario is created, navigate to the simulation folder and open the script.

Please note that the script will get created as the same package structured that was specified before starting the recorder – in our case, it will be com.learn.gatling and the class name will be “AddProduct”.

Let’s open the AddProduct.scala file and try to go through the different sections of the script.

This can be explained as follows:

#1) Setup Configuration: i.e httpProtocol and headers – In this section overall configuration of data for the script is done, such as:

#2) Scenario Definition: This contains the actual scenario and the order of requests that need to be executed in order to re-create the scenario that was running in the browser window.

Also, an important point to note here is – we’ve just mentioned relative URL’s here for the requests, instead of the complete URL. This is because we will use httpProtocol configuration we have discussed in point #1, where the scenario configuration data is defined.

#3) Scenario Execution: This section is the most important section which contains the scenario setup steps.

The inject configuration here is the number of users/threads or in other words, the load with which we want to test this scenario.

The default value for a number of users is always 1 and this can be changed before the scenario is executed.

Also, please note that we are also using the httpProtocol definition that we have discussed in point#1 which contains all the basic configurations for the scenario to be executed.

We will be looking at more details around inject and load configuration in the next tutorial.

Now, we will see how to execute the scenario using this simulation script that was created using the recorder. The resultant script that gets created is actually a Scala-based class which contains details around the scenario that was executed through the browser.

Here is a video tutorial for Gatling Script Execution:

The Gatling installation comes with a shell script (for Windows users, it is a batch script) that could be used to execute this simulation.

Please follow the steps below to execute the created simulation:

#3) In case of multiple script files present in the simulation folder, the script will prompt the user to select the simulation that the user wants to run (To simulate this, create the same scenario in different packages, and when Gatling script is run, you can see that it displays 2 different scripts).

#4) Simulation is selected (or it is set to default to the simulation present in the folder if there is just one simulation script available).

#5) The script now prompts to add an optional run description. You can simply ignore this and press enter to start the simulation execution.

#6) While the simulation is executing, you can see execution reports getting printed on the terminal and the parameters like response time, total requests, success/failures, etc summarized view will be displayed once the scenario execution completes. 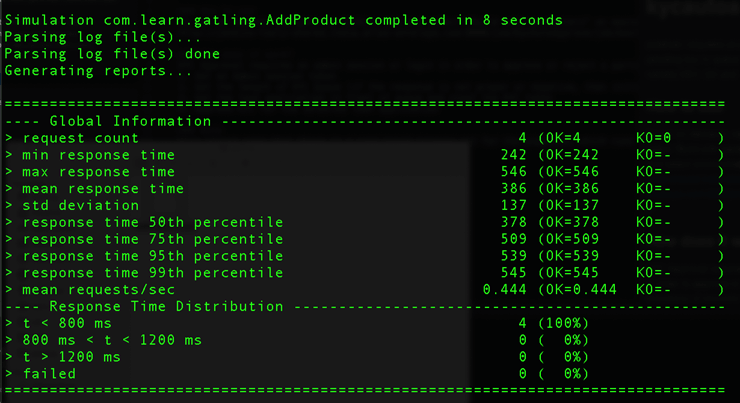 #7) Gatling also generates a detailed HTML based report at the end of the scenario execution completion which contains a lot of different data points with respect to the executed scenario.

We will look into the details of the generated report in the next tutorial.

Gatling provides a lot of feature-rich capabilities in order to build a good performance automation test suite leveraging the wide Gatling DSL as well as growing community support for assistance and get queries answered.

It’s important to note here that unlike other tools like JMeter, Gatling does involve a steep learning curve, but in lieu of that, it gives a lot of programming capabilities to create a robust and fully functional set of performance and load testing simulation scripts.

Some of these advantages are as follows:

In this tutorial, we have touched upon the basics of using Gatling as a load testing tool of choice. With the expressive DSL and excellent support for HTTP Protocol, Gatling is fast gaining popularity to be used as a tool of choice for many.

In the next tutorial, we will cover writing Gatling scripts as Scala projects – i.e. without using the recorder and understand the report templates that get generated when the Gatling completes the simulation execution.