This Tutorial Explains The Key Differences Between C Vs C++ Languages In Terms Of Various Features:

C++ language is a subset of the C language.

In this tutorial, we discuss some of the main differences between C and C++ language. 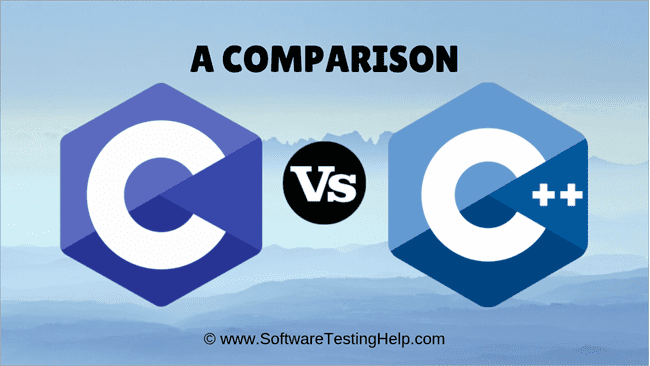 Key Features Of C And C++

Before going ahead with the differences, let us list down some of the features of both C and C++ language.

Key Differences Between C Vs C++

Enlisted below are the main differences between C Vs C++.

C++, on the contrary, is an object-oriented programming language. Here the data of the problem is the main focus and the classes are built around this data. Functions operate on the data and closely bound to data.

As C is a procedural language, it follows a top-down approach of programming. Here we take the problem and then break it into subproblems until we find single subproblems that can be solved directly. Then we combine the solutions to get the main solution.

C language is helpful in the programming of embedded systems or low-level implementations.

#5) Compatibility With Each Other:

C++ is a subset of C as it is developed and takes most of its procedural constructs from the C language. Thus any C program will compile and run fine with the C++ compiler.

However, C language does not support object-oriented features of C++ and hence it is not compatible with C++ programs. Therefore programs written in C++ will not run on C compilers.

#6) Compatibility With Other Languages:

C++ language is generally compatible with other generic programming languages but C language is not.

We can say that C is a hands-on language and we can program it in whichever way we want. C++ consists of some high-level object-oriented programming constructs that help us to code high-level programs.

Thus if we say C is easy then C++ is also easier to code.

In C, the main emphasis is on functions or procedures rather than on data. Hence as far as data security is concerned, it is negligible in C.

In C++, as we are dealing with classes and objects, the main building block of the program is Data. Thus, data is tightly secured using classes, access specifiers, encapsulation, etc.

The standard input-output operations in C to read/write data from/to the standard device are ‘scanf’ and ‘printf’ respectively.

Being a procedural language, C has more emphasis on the sequence of steps or procedures to solve a problem.

C++, on the other hand, is object-oriented and thus puts more focus on objects and classes around which the solution is to be built.

However, in C language, we can have a main() function called by the other functions in the code.

Variables need to be declared at the beginning of the function block in C, on the contrary, we can declare variables anywhere in a C++ program provided they are declared before they are used in the code.

Pointers are the variables that point to memory addresses. Both C and C++ support pointers and various operations performed on pointers.

References act as aliases for the variables and point to the same memory location as a variable.

We can declare enumerations in C as well as C++. But in C, the enumeration constants are of Integer type. It is the same as declaring an integer constant without any type of safety.

In C++, the enumerations are different. They are of distinct types. Thus to assign an integer type to a variable of an enumerated type, we need explicit type conversion.

However, we can assign an enumerated value to a variable of integer type as enumerated type allows integral promotion or implicit conversion.

As far as strings are concerned, the declaration ‘char []’ declares a string array. But when the string declared as above is passed between the functions, then there is no guarantee that it will not be changed by the other external functions as these strings are mutable.

This drawback is not there in C++ as C++ supports string data type that defines immutable strings.

Inline functions are not supported in C. C usually works with macros to speed up the execution. In C++ on the other hand, inline functions, as well as macros, are used.

The C language does not support default parameters. Whereas C++ supports the use of default arguments.

Structures in C and C++ use the same concept. But the difference is, in C, as we cannot include functions as members.

C++ allows structures to have functions as its members.

C is a procedural language and hence it does not support the concept of classes and objects.

Apart from this C++ also supports Boolean and string data types which are not supported by C.

This is an important feature of object-oriented programming and is present in C++. However, C does not support this feature.

Inheritance is also an important feature of object-oriented programming that is supported by C++ and not C.

Namespaces are not supported in C but are supported by C++.

C is a free-format language that gives us the ability to program anything. C++ is derived from C and also has object-oriented programming features which make it more efficient as far as the source code is concerned.

Abstraction is the way to hide the implementation details and expose only the required interface to the user. This is one of the distinguishing features of Object-oriented programming.

C++ supports this feature while C does not.

Encapsulation is a technique using which we encapsulate the data from the outside world. This aids in information hiding.

C++ uses classes which bundle data and the functions operating on this data in a single unit. This is encapsulation. C does not have this feature.

The features of abstraction and encapsulation can aid in information hiding by exposing only the required details and hiding the details like implementation, etc., from the user. This way we can enhance the security of data in our programs.

C doesn’t put any emphasis on data and does not deal with information hiding.

C has no support for object-oriented programming and does not support polymorphism. However, we can simulate the dynamic dispatch of functions in C using function pointers.

Virtual functions which are also called as Runtime polymorphism is a technique that is used to resolve function calls at runtime. This is yet another feature of object-oriented programming which is supported by C++ and not by C.

As far as the mapping of data with functions is concerned, C language is very complicated as it does not keep any focus on data.

In C we use functions like malloc (), calloc (), realloc (), etc., to allocate memory and free () function to free the memory. But, in C++, we use new () and delete () operators to allocate and deallocate the memory respectively.

C++ supports a lot more keywords than that of C. In fact, C has only 32 keywords whereas C++ has 52 keywords.

Templates allow us to define classes and objects independent of the data type. Using templates, we can write generic code and call it for any data type.

C++ being object-oriented uses classes and objects and thus supports templates. C, on the other hand, doesn’t support the concept of templates.

So far, we have seen the key differences between C Vs C++. Now we will answer some of the frequently asked questions regarding C, C++ and their comparison.

Answers: C and C++ are still popular despite too many programming languages in the market. The main reason is that C and C++ are close to the hardware. Secondly, we can almost do anything with these languages.

The performance of C++ is high when compared to other languages. When it comes to embedded system development, C seems to be the obvious choice. Although one size doesn’t fit all, there are some applications and projects which can be developed using C and C++ only.

Answers: Actually, both are difficult and both are easy. C++ is built upon C and thus supports all features of C and also, it has object-oriented programming features. When it comes to learning, size-wise C is smaller with few concepts to learn while C++ is vast. Hence we can say C is easier than C++.

To conclude, we can say that there is no definite answer as to which is more difficult or which is better.

Answers: Yes, we can learn C++ easily without knowing C.

Thus, with the right mindset and good programming knowledge, you can jump to C++ without touching C. As C is a subset of C++, in the course of learning C++, you will always get hold of C language.

Answers: Actually, this depends on what feature we are using. For Example, if we have used object-oriented programming features like virtual function in our C++ program, then this program is bound to be slower as there are always extra efforts required to maintain virtual tables and the other details about virtual functions.

But if we are using normal features in C++, then this C++ program and any other C program will have the same speed. Thus it depends on factors like the application that we are developing, the features we are using, etc.

Answers: The answer is Yes and No.

It’s yes because we can learn any programming language if we have the right motivation, time to invest and will to learn. The only prerequisite is that you should have basic computer knowledge and basic programming terminology.

Thus when we start with C++, as long as we are learning the basics of the language and other constructs like loops, decision making, etc. it is quite easy like any other language.

Now we will come to No part.

We know that C++ is very vast and has lots of features. Thus as we advance our learning, we might face lots of challenges in C++ programming, so as a novice we may not be able to handle them.

Just imagine the situation when I start with C++ as the first language and I encounter memory leak!! Hence, it is good, to begin with, simple languages like Python or Ruby for that matter. Get the hang of programming and then go for C++.

In this tutorial, we have explored the main differences between C Vs C++ languages in terms of various features.

While C is a procedural language and C++ is an object-oriented programming language we have seen that many features are exclusive to C++. As C++ is derived from C, it supports many of the features that are supported by C.

In the subsequent tutorials, we will continue discussing differences between C++ and other programming languages like Java and Python.