Get To Know All About Library Functions In C++ With Examples.

Library functions which are also called as “built-in” functions are the functions that are already available and implemented in C++.

We can directly call these functions in our program as per our requirements. Library functions in C++ are declared and defined in special files called “Header Files” which we can reference in our C++ programs using the “include” directive.

=> Visit Here For The Complete C++ Course From Experts. 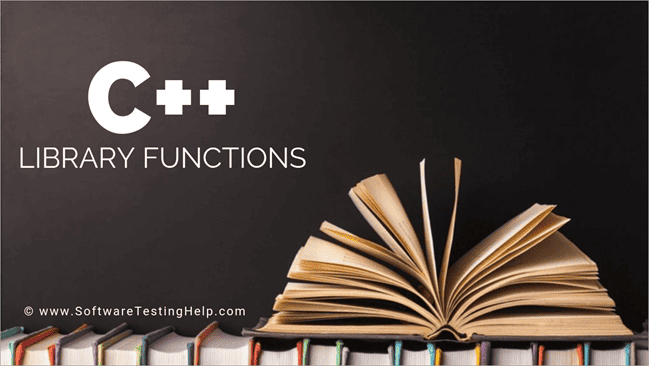 For Example, to include all the built-in functions related to math, we should include <cmath> header as follows:

Some of the standard library header files that are used in C++ are tabularized as below. These headers replace their respective counterparts with “.h” extension.

The Header files are briefed along with their description below.

We have already used most of these headers throughout our tutorial so far. Notable is <iostream>, <string>, <ctime> headers that we have used from time to time.

In our STL tutorials, we will be making use of all the container headers and <algorithm> as well as <iterator> header. Similarly, when we learn file I/O and exception handling, we will be using respective headers.

This header contains various function prototypes related to mathematical functions. Some of the prototypes that are used extensively are listed here.

This header contains function prototypes that are mainly used for converting the character to upper/lower case or to check if a character is a digit etc.

Function prototypes included in <cctype> header are listed as below:

We also have another header <stdlib> that includes various useful library functions that are used extensively in C++ programming.

We have listed some of the popular functions in <stdlib> below:

In this tutorial, we have gone through some of the header files supported by the C++ standard library.

We also discussed some popular library functions that are used by programmers. This list of functions is not exhaustive as each header of the C++ standard library contains too many functions for the benefit of programmers.

In our upcoming C++ tutorials, we will come across more library functions.