This Introductory Maven Tutorial will explain what is Maven, why use Maven, its Definition, Basic Terminologies, Types of Maven Repository, etc:

In this tutorial, we will explore Maven, its definition, overview, operational steps on Maven, and understand the basic terminologies on Maven, activities performed by Maven, and the types of Maven repositories in detail. 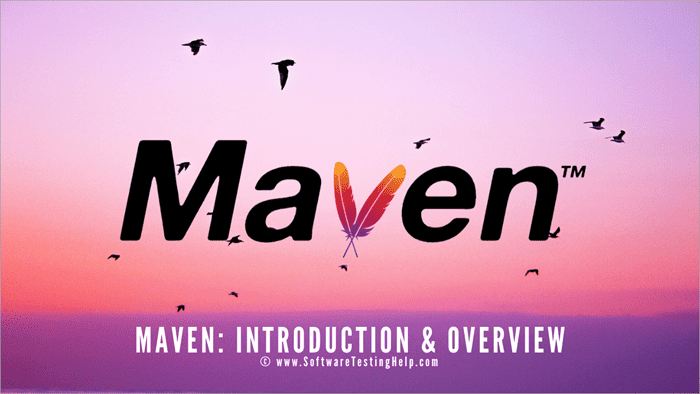 Maven is a build and project management tool that is generally used in frameworks built in Java. It is developed by Apache Software Foundation. Maven, a word from the Yiddish language, means ‘gatherer of knowledge’. It was introduced to make the process of triggering build in the Jakarta Turbine Project.

Maven is controlled by the Project Object Model (pom) file. While working with frameworks built-in in Java, we often have to deal with a number of dependencies.

Before Maven came into the picture, all dependencies, that are nothing but JAR files had to be added to our framework manually. Also, we needed to take care of the software upgrade in our project.

Maven ensures that project JARs and libraries are downloaded automatically. Only the information relating to the versions of the software and the type of dependencies need to be described in the pom .xml file.

Maven can take care of projects in Ruby, C#, and other languages. It takes up the task of building projects, their dependencies, and documentation.

ANT, another tool developed by Apache Software Foundation, is also used for the building and deployment of projects. But Maven is more advanced than ANT. Like ANT, Maven has made the process of building simple. Thus, in short, Maven has made the life of developers easy.

Maven performs the below activities:

Maven takes care of processes like releases, distribution, reporting, builds, documentation, and SCMs. Maven connects to the Maven Central repository and loads them locally. Some of the IDEs that support project development with Maven are NetBeans, Eclipse, IntelliJ, and so on.

Maven should be used in our projects in the following scenarios:

#2) The dependencies are loaded into the local repository.

#3) Goes through the built-in life cycles of Maven as shown below:

#4) Each built-in cycles have several phases. For example, default has twenty-three phases while clean and site have three and four phases respectively.

#5) Each Maven cycle goes through several stages where a particular stage has a specific objective.

Some of the important phases are listed below:

From the command prompt, the phases are run in the following way:

#6) A group of Maven goals makes up a phase. Just like phases of Maven, each goal has to be run in a specific order.

A goal has the following syntax:

Here, we have discussed some of the phases along with the goals tied to them:

The operational steps of how Maven works are diagrammatically shown below:

Maven project in Eclipse IDE with a code snippet from the POM XML file is shown below.

As depicted in the image above, we can see that <groupId> , <artifactId> and <version> tags form the part of the dependencies defined for the project.

If we want to add Selenium dependencies to our project, then we need to have the below code snippet in the pom file.

Out of the multiple projects hoisted in the Maven central repository, it identifies Selenium with the help of the groupId. Similarly, ArtifactId is like a subproject under the groupId.

For example, Selenium code is supported by languages like Java, C#, and so on. Here, from the artifactId, it is evident that we are only connecting to the JARs associated with Java. Also, the version of the JAR to be associated to the project is also a part of the dependencies.

We can also publish our own project in the Maven repository by providing these three pieces of information.

Maven Repository can be of three types:

Once Maven reads the dependencies from the POM file, it first searches them in the local repository, then to the central, and finally to the remote repository. If the dependencies are not found in any of the three repositories, then the user is notified with an error and the process is stopped.

The local repository is located in our local system – mostly in .m2 (C:/Users /superdev /.m2) directory which shows its presence once Maven is installed in our system and we have been able to successfully execute a Maven command.

It is also possible to modify this location in settings.xml (MAVEN_HOME /conf /settings.xml) with the help of the localRepository tag.

Below xml code snippet, that shows how to change the locations of the local repository:

Central repository is developed by the Apache Maven group and is hosted on the web. This is considered as the central repository and it has all the common libraries. Like a local repository, we can also modify the location where they are to be downloaded by default by changing the setting.xml.

A remote repository is also hosted on the web. In some scenarios, a company can develop its own remote repository and perform deployments on its private projects. These will be owned by that specific company and can be operated only inside it.

The remote repository has similar working patterns to a central repository. Whenever any dependencies or configurations are required from these repositories, they shall first be downloaded into our local and then used.

A sample xml code for the remote repository with the id and url is shown below.

We hope that you got a clear idea of what maven is, why we use Maven, operational steps on Maven, Maven cycles, Phases, Goals, Basic terminologies on Maven, and the Types of Maven repositories.

In our next tutorial, we shall explore how to build a project in Maven, the environment set up for Maven, and many other related topics.