Mobile technology and Smartphone devices are the two popular terms that are often used in this busy world. Almost 90% of the world’s population has a smartphone in their hands.

The purpose is not only meant for “calling” the other party but there are various other features in the Smartphone like Camera, Bluetooth, GPS, Wi-FI and also performing several transactions using different mobile applications. 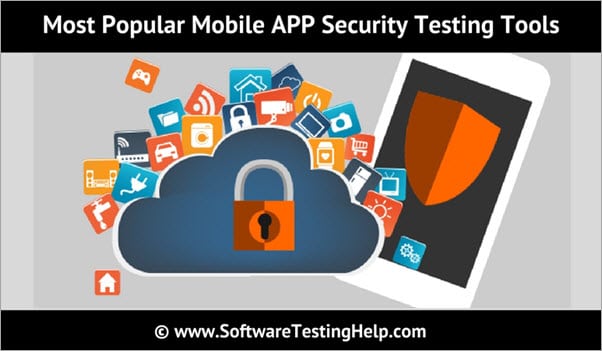 So from a business perspective, it is essential to perform security testing, but most of the time testers find it difficult since mobile apps are targeted to multiple devices and platforms. So tester requires a mobile app security testing tool which ensures that the mobile app is secure.

Enlisted below are the most popular Mobile App Security Testing tools that are used worldwide.

ImmuniWeb® MobileSuite offers a unique combination of mobile app and its backend testing in a consolidated offer. It comprehensibly covers Mobile OWASP Top 10 for the mobile app and SANS Top 25 and PCI DSS 6.5.1-10 for the backend. It comes with flexible, pay-as-you-go packages equipped with a zero false-positives SLA and money-back guarantee for one single false-positive!

Zed Attack Proxy (ZAP) is designed in a simple and easy to use manner. Earlier it was used only for web applications to find the vulnerabilities but currently, it is widely used by all the testers for mobile application security testing.

LinkedIn is a social networking service company launched in 2002 and is headquartered in California, US. It has a total employee headcount of around 10,000 and a revenue of $3 billion as of 2015.

QARK stands for “Quick Android Review Kit” and it was developed by LinkedIn. The name itself suggests that it is useful for the Android platform to identify security loopholes in the mobile app source code and APK files. QARK is a static code analysis tool and provides information about android application related security risk and provides a clear and concise description of issues.

Micro Focus and HPE Software have joined together and they became the largest software company in the world. Micro Focus is headquartered in Newbury, the UK with around 6,000 employees. Its revenue was $1.3 billion as of 2016. Micro Focus primely focused on the delivery of enterprise solutions to its customers in the areas of Security & Risk Management, DevOps, Hybrid IT, etc.

Android is an operating system for mobile devices developed by Google. Google is a US-based multinational company that was launched in 1998. It is headquartered in California, the United States with an employee count of more than 72,000. Google’s revenue in the year 2017 was $25.8 billion.

Android Debug Bridge (ADB) is a command-line tool which communicates with the actual connected android device or emulator to assess the security of mobile apps.

It is also used as a client-server tool which can be connected to multiple android devices or emulators. It includes “Client” (which sends commands), “daemon” (which runs comma.nds) and “Server” (which manages communication between the Client and the daemon).

Codified Security was launched in 2015 with its headquarters in London, United Kingdom. Codified Security is a popular testing tool to perform mobile application security testing. It identifies and fixes the security vulnerabilities and ensures that the mobile app is secure to use.

It follows a programmatic approach for security testing, which ensures that the mobile app security test results are scalable and reliable.

MWR InfoSecurity is a Cyber Security consultancy and was launched in 2003. Now it has offices across the globe at the US, UK, Singapore, and South Africa. It is the fastest-growing company that provides cybersecurity services. It provides a solution in different areas like mobile security, security research, etc., to all its clients spread across the world.

MWR InfoSecurity works with the clients to deliver security programs. Drozer is a mobile app security testing framework developed by MWR InfoSecurity. It identifies the security vulnerabilities in the mobile apps and devices and ensures that the Android devices, mobile apps etc., are secure to use.

WhiteHat Security is a United State based Software Company established in 2001 and is headquartered in California, USA. It has revenue of around $44 million. In the internet world, the “White Hat” is referred to as an ethical computer hacker or computer security expert.

Synopsys Technology is a US-based Software Company that was launched in 1986 and is based out of California, United States. It has a current employee headcount of around 11,000 and a revenue of around $2.6 billion as of the financial year 2016. It has offices worldwide, spread across different countries in the US, Europe, Middle-East, etc.

Veracode is a Software Company based out of Massachusetts, United States and was established in 2006. It has a total employee headcount of around 1,000 and revenue of $30 million. In the year 2017, CA Technologies acquired Veracode.

Most of the mobile apps are using web services which may have security loophole. MobSF addresses the security-related issues with web services.

Through this article, we learned about the various Mobile APP Security Testing Tools available in the market.

It is always important for the testers to elite security testing tools according to the nature and requirement of each mobile application.

In our next article, we will discuss more on Mobile Testing Tools (Android and iOS Automation Tools).