A beginners guide to Unix – A complete Unix tutorial series of 20+ in-depth text and video tutorials with hands-on examples.

By the end of this series, you will be able to understand the basic and advanced concepts of Unix Architecture, Unix Commands, and the applications including File Management, Text Processing, and Unix Shell Scripting. 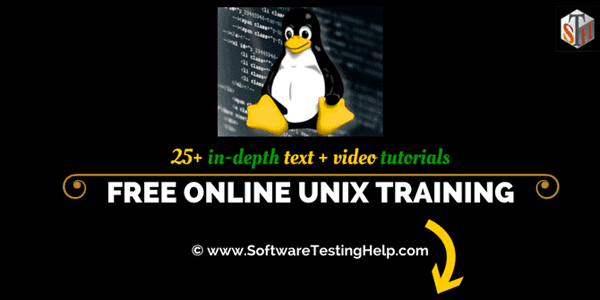 What is Covered in this Unix Training Series?

Here is a brief overview of what all we will be covering in this series of tutorials:

#1) Introduction to Unix: In this tutorial, you will be able to understand the basic concepts of operating systems, features of Unix, along with its architecture.

And this tutorial contains following parts:

You can also download basic and Advanced Unix command documents under this section.

#3) File Manipulations: In this tutorial, we will dive deep into the Unix File system which is essential to understand Unix commands.

And this tutorial contains five parts:

#4) Introduction to Shell Scripts: This tutorial will give you an overview of shell programming and also provide an understanding of some standard shell programs.

#5) Working with vi editor: This tutorial will introduce you the standard editor on Unix systems – the ‘vi’sual editor. And will describe the various modes of operations along with the commands for those various modes.

#6) Features of shell scripting: In this tutorial, we return to shell scripts and understand how to work with variables. Variables are used to change the flow of the program and to maintain state.

#7) Operators: In this tutorial, we will review how to use operations in shell scripts. Operators are used for performing mathematical operations in the shell programs.

#9) Loops: In this tutorial, we will cover special control instructions that are used to iterate a set of commands over a series of data.

#10) Functions: In this tutorial, we will see how to write functions in shell scripts. Functions are used to specify blocks of commands that may be repeatedly invoked at different stages of execution.

#11) Text Processing: In this tutorial, we will learn about some of the powerful commands that Unix provides to process text.

#12) Command Line Parameters: This tutorial shows how to work with command line parameters in shell scripts. The parameters allow the users to change command behavior at run time.

#13) Processes in Unix: In Unix, all the instructions outside the kernel are executed in the context of a process. In this tutorial, we will see how the processes work along with the commands that we can use to work with processes.

#14) Advanced Shell Programming: In this tutorial, we will learn some advanced mechanisms that are used for more complex scripting using inbuilt commands.

Watch out the entire series to gain immense knowledge of various concepts involved in Unix. Hope you will enjoy them a lot !!