This tutorial will explain features, advantages and key differences between Python vs C++ in detail:

Python and C++ are two different languages that have different features and different behavior. Both these languages have one thing in common i.e. strong support for object-oriented programming. 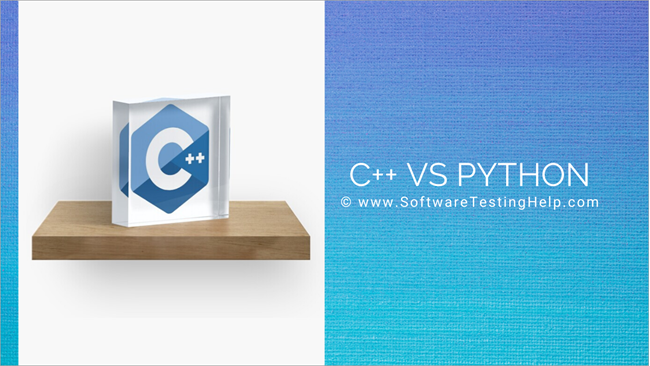 Enlisted below are the various features of C++.

Now let’s see some of the features of Python language.

Let’s explore some of the key differences between C++ and Python.

Table Of Differences Between Python Vs C++

Key Differences Between C++ And Python

The key differences between C++ and Python that are important from the programming languages’ point of view are discussed below.

C++ is a compiled language. C++ compiler generates an object code from the C++ source code and is then executed to produce the output.

Python is an interpreted language. The Python code with an extension py need not be compiled. We can directly pass it to the Python interpreter and generate the output.

C++ has a lot of features and also has a comparatively difficult syntax. It is not that simple to write the C++ code.

Python is easy to write and has a clear syntax. Hence writing Python programs is much easier when compared to C++.

C++ is a statically typed language i.e. the declaration of a variable, the data type of variables, etc. are verified at compile time. This keeps the source code error-free at runtime.

Python, on the other hand, is not statically typed. There is no type checking done at compile time. Hence, the code is prone to errors.

C++ is not portable i.e. we need to recompile the code on every different platform. C++ is mainly “Write Once, Compile Anywhere”.

Python is portable. It is also cross-platform and we can execute programs on any platform.

In C++, memory management is manual. C++ does not support automatic garbage collection of resources.

Python, on the other hand, has a feature of automatic garbage collection. Its memory management is system-controlled.

Using Python, we can do rapid prototyping of code so that it can be used later for building applications using higher-level languages.

#7) Scope of the Variables

C++ has code demarked by blocks using curly braces ({}) and loops. The scope of the variables is limited to these blocks and loops demarked by {}.

The scope of the variables used in Python is not limited to blocks or loops. The variables are accessible even outside the curly braces.

C++ can be easily installed on Windows. Python, however, is difficult to install.

In C++ data types are bound to names and get checked at compile time. This reduces the possibility of any errors at runtime.

In Python, the data types are bound to values and are checked at runtime. Code may be more error-prone at runtime as we do not catch those errors at compile time.

In C++, the types of parameters and return type during function call has to match with that in the definition of the function.

In Python, there is no such restriction on parameter and return types.

C++ code is difficult to maintain as it can get complicated to read as solutions become bigger.

Python, on the other hand, has clean code and simple syntax. The source code for Python is easier to maintain.

In C++ there is a clear demarcation of the code by using blocks enclosed in {}, semicolons indicating the end of the statement, etc. Thus in C++, the syntax is well organized.

In Python, there are no blocks or semicolons. Instead, Python uses indentation.

As far as speed of execution is concerned, C++ programs run faster. In fact, C++ is known and used widely in applications that are required to run faster like gaming platforms.

Python, on the other hand, runs slowly. Moreover, Python programs run slower than Java programs. Hence, we employ Python specifically for applications that can compromise on speed.

C++ is a statically typed language, thus we have fewer errors to take care of at runtime. C++ also creates a more robust and faster runtime code. This makes C++ a language with high performance.

Python being dynamic, has a possibility that some errors or unwanted situation may arise at runtime. So as far as performance is concerned, Python lags behind C++.

But when it comes to machine learning, Python is the one that has the upper hand.

Python is easy to learn and easy to put in practice when compared to C++ which becomes harder as we advance through its features. Another advantage of Python is its libraries that allow us to write any functionality especially data analysis and machine learning.

So popularity-wise Python scores over C++. Especially for the development of machine learning applications, it is the number one choice for programmers.

Python with its simplicity and easy to use features allows us to write concise, easily readable code, etc. This is helpful when we develop complex applications for machine learning as we don’t have to struggle with a programming language.

Secondly, Python is easy to learn and is a simple language. The same cannot be said about C++. C++ is more of a lower-level language that is easier for computers than humans.

Thus Python scores on these parameters especially when we have to choose between C++ and Python for developing machine learning applications.

Advantages Of C++ Over Python

Answer: Well, ideally it’s up to the programmer as what to learn. Secondly, it also depends on the current requirements. Suppose if you want to learn system programming or any such low-level programming, we would suggest you to go for C++.

If you want some machine learning knowledge and put it to practice, then we would suggest you to go for Python. Alternatively, if you want to make yourself comfortable in web programming, then you could opt for Ruby or JavaScript or angular JS, etc.

Answer: Yes. As far as language simplicity and easiness is concerned. One can learn Python just to get the hang of programming. It is free of those compulsory braces and semicolons, pointers, templates, STL, specific types, etc.

So as a programmer if you want the knowledge of simple a programming language then Python is anytime better than C++. But again as mentioned in our previous answer, it depends on requirements.

Overall Python is better than C++ in terms of its simplicity and easy syntax. But C++ is better in terms of performance, speed, vast application areas, etc.

Answer: NO. C and C++ form the basis of every programming. Python is in fact built on C with web programming in mind. So there is no possibility that Python will replace fundamental languages like C or C++ at least not in the near future.

Having said that it can just move a bit ahead of C/C++ in the cases where interfacing with hardware devices, performance, detailed resource management, etc. is not required.

Answer: Actually, all three languages have their own uses and advantages. C++ is known for its high performance, speed, and memory management. Java is famous for its platform independence while Python is known for its simplicity, less complex syntax, high readability, and active community support.

Answer: Given below are the various reasons for which the C++ code runs faster than Python:

All these reasons contribute to the faster performance of the C++ code. Some features of Python that are listed below are also responsible for its slowness.

C++ and Python are two different languages that have very diverse features as well as applications. While Python has easy syntax, high readability, etc. it is far behind C++ in terms of system programming, performance, and speed.

While Python can be the best choice for machine learning development, C++ is best for a whole range of applications including system programming as C++ offers us all the features available under the sun.

In this tutorial, we have seen the major differences between C++ and Python and discussed the advantages of Python and C++ over Python as well.