A String Array in C++ is an Array of Strings. In this Tutorial, we will Dig into the Details of the Representation & Implementation of String Arrays in C++:

We have seen arrays in C++ in our earlier tutorials. Arrays allow us to declare data elements of various types. Whereas all numeric data types’ arrays are identical in operations & implementation, and the arrays with string data type are different.

In C++, the string can be represented as an array of characters or using string class that is supported by C++. Each string or array element is terminated by a null character. Representing strings using a character array is directly taken from the ‘C’ language as there is no string type in C. 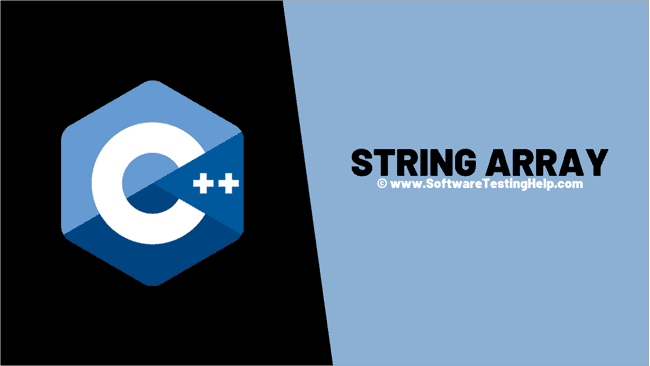 In C++, strings can be represented using three ways.

Now, let’s discuss each of the above methods and also see the programming examples for each representation.

So we can use a general representation as shown below.

For example, consider the following declaration:

The above declaration declares an array of strings named ‘string_array’ which has 10 elements and the length of each element is not more than 20.

We can declare and initialize an array of animals using strings in the following way:

Let us see a programming example using the concept of two-dimensional character arrays to better understand the concept. 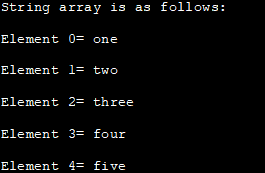 In the above program, we have declared an array of strings called strArray of size 5 with the max length of each element as 10. In the program, we initiate a for loop to display each element of the array. Note that we just need to access the array using the first dimension to display the element.

Easy access to elements is one of the major advantages of 2-D arrays. They are indeed simple to program.

The major drawback of this type of representation is, both the dimensions of array i.e. number of elements and the maximum length of the element are fixed and cannot be changed as we want.

Secondly, we specify the maximum length of each element as the second dimension during the declaration of the array. If the string length is specified as 100, and we have all the elements that are lesser in length, then the memory is wasted.

In this, we use the keyword ‘string’ in C++ to declare an array of strings. Unlike character arrays, here we have only 1D array. The sole dimension specifies the number of strings in the array.

The general syntax for an array of strings declaration using the string keyword is given below:

Note that we do not specify the maximum length of string here. This means that there is no limitation on the length of the array elements.

As an example, we can declare an array of color names in the following way.

We can further initialize this array as shown below:

Given below is a C++ program to understand the string keyword and its usage in an array of strings. 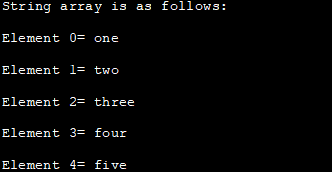 We have modified our previous character array program and demonstrated the usage of string keyword. The output of the program is the same but the way it is achieved is different as we define an array of strings using the string keyword.

Note that the array of strings using the string keyword has an advantage in which we have no limitations on the length of the strings in the array. Since there is no limitation, we do not waste memory space as well.

On the downside, this array has a fixed size. We need to declare the size of the array beforehand.

We can also use STL vectors for declaring and defining dynamic arrays. Thus to define an array of strings we can have an STL vector of type string.

This declaration of an array of strings using vector is shown below:

Referring to the above declaration, we can declare a vector “subjects” in the following way:

Note that we can assign elements to the vector by using the “push_back” method or any other STL vector methods.

Given below is a programming example using C++ to demonstrate the usage of the STL vector to represent an array of strings. 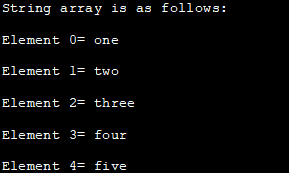 In the above program, we have an STL vector myNumbers of type string. Next, we add elements to this vector using the push_back method and then display each of the elements of the vector.

If we see the entire working of the STL vector and array of strings, we see that in this case, we do not have a limit on the number of elements in the array or the maximum length of each element. We see that the array of strings using vectors is completely dynamic and can be reduced or increased dynamically.

How To Select The Representation To Use?

It depends on the purpose and requirements of the string array. When we have the requirement that we need a fixed-size string array and we know the exact data that will go into a string array, then we can go for character array or string representation.

When we want the string array to grow or shrink dynamically, we can resort to vector representation as it will help us to develop programs by dynamically changing the array.

String arrays are special arrays having data as strings. This means each element of the array is a string terminated by null character.

In our subsequent tutorials, we will continue exploring C++ strings and C++ functions in detail.