Types Of Functions In C++ Along With Their Uses.

In our earlier tutorials until now, we have seen the various concepts in C++ like variables, storage classes, operators, arrays, strings, etc.

In this tutorial, we will move ahead and discuss the concept of functions. Functions are also called methods, subroutines or procedures. 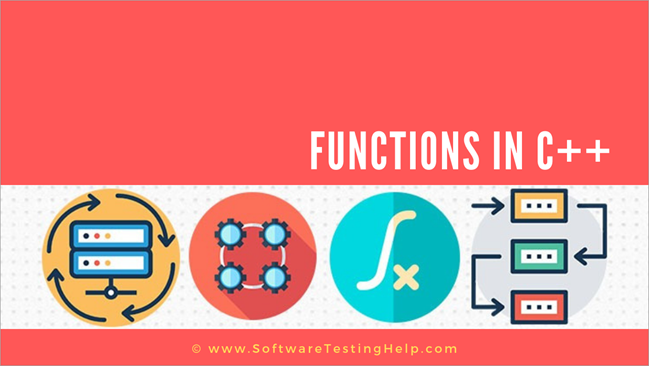 How Do We Define A Function?

Types Of Functions In C++

In C++, we have two types of functions as shown below. 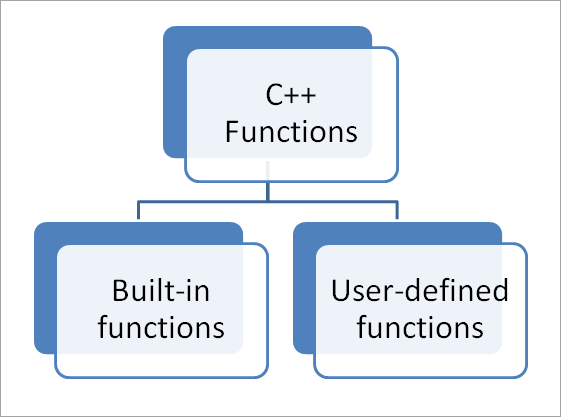 Built-in functions are also called library functions. These are the functions that are provided by C++ and we need not write them ourselves. We can directly use these functions in our code.

These functions are placed in the header files of C++. For Example, <cmath>, <string> are the headers that have in-built math functions and string functions respectively.

Let us see an Example of using built-in functions in a program.

Here we are using the headers <iostream> and <string>. The data types and other input/output functions are defined in <iostream> library. String functions used like getline, size are a part of the <string> header.

The general syntax for user-defined functions (or simply functions) is as given below:

So as shown above, each function has:

As already mentioned, we need to ‘declare’ a function before using it.

We have given some examples of the function declaration below for your reference.

Above declaration is of a function ‘sum’ that takes two integers as parameters and returns an integer value.

This means that the swap function takes two parameters of type int and does not return any value and hence the return type is void.

The function display does not take any parameters and also does not return any type.

For the above declaration of swap function, the definition is as given below:

Note that declaration and definition of a function can go together. If we define a function before referencing it then there is no need for a separate declaration.

Let us take a complete programming Example to demonstrate a function.

In the above example, we see that there is a function swap that takes two parameters of type int and returns nothing. Its return type is void. As we have defined this function before function main, which is a calling function, we have not declared it separately.

When we have a function in our program, then depending on the requirement we need to call or invoke this function. Only when the function is called or invoked, the function will execute its set of statements to provide the desired results.

In the above example of swapping numbers, we have written the comments for formal and actual parameters. In the calling function i.e. main, the value of two integers is read and passed to the swap function. These are the actual parameters.

We can see the definitions of these parameters in the first line of the function definition. These are the formal parameters.

Let’s take an Example of adding two numbers to demonstrate the return types.

In the above example, we have a function sum that takes two integer parameters and returns an integer type. In the main function, we read two integers from the console input and pass it to the sum function. As the return type is an integer, we have a result variable on the LHS and RHS is a function call.

We have seen that the general syntax of function requires a return type to be defined. But if in case we have such a function that does not return any value, in that case, what do we specify as the return type? The answer is that we make use of valueless type “void” to indicate that the function does not return a value.

Note: It is considered as a good practice to include a statement “return;” at the end of the void function for clarity.

We have already seen the concept of actual and formal parameters. We also know that actual parameters pass values to a function which is received by the format parameters. This is called the passing of parameters.

In C++, we have certain ways to pass parameters as discussed below.

In the program to swap two integers that we discussed earlier, we have seen that we just read integers ‘a’ and ‘b’ in main and passed them to the swap function. This is the pass by value technique.

We can understand this better by once again visiting the swapping of two numbers.

We have simply modified the earlier program to print the values of formal parameters & actual parameters before and after the function call.

As seen from the output, we pass values a=3 and b=2 initially. These are the actual parameters. Then after swapping inside the swap function, we see that the values are actually swapped and a=2 and b=3.

However, after the function call to swap, in the main function, the values of a and b are still 3 and 2 respectively. This is because the actual parameters passed to function where it has a copy of the variables. Hence although the formal parameters were exchanged in the swap function they were not reflected back.

Though Pass by value technique is the most basic and widely used one, because of the above limitation, we can only use it in the cases where we do not require the function to change values in calling the function.

Note: References are nothing but aliases of variables or in simple words, it is another name that is given to a variable. Hence a variable and its reference share same memory location. We will learn references in detail in our subsequent tutorial.

In pass by reference technique, we use these references of actual parameters and as a result, the changes made to formal parameters in the function are reflected back to the calling function.

We modify our swap function for our readers to understand the concept better.

Note: The pass by reference technique shown in the above example. We can see that the actual parameters are passed as it is. But we append an ‘&’ character to the formal parameters indicating that it’s a reference that we are using for this particular parameter.

Hence the changes made to the formal parameters in the swap function reflect in the main function and we get the swapped values.

In C++, we can also pass parameters to function using pointer variables. The pass by pointer technique produces the same results as that of pass by reference. This means that both formal and actual parameters share the same memory locations and the changes made in function are reflected in the calling function.

The only difference that in a pass by reference we deal with references or aliases of parameters whereas in a pass by pointer technique we use pointer variables to pass the parameters.

We present the swapping of two integers again to demonstrate the Pass by Pointer technique.

The following Example demonstrates the use of Default Parameters.

As shown in the code example, we have a function ‘mathoperation’ that takes three parameters out of which we have provided default values for two parameters. Then in the main function, we call this function three times with a different argument list.

Note that while providing default parameters, we always start from the right-most parameter. Also, we cannot skip a parameter in between and provide a default value for the next parameter.

Now let us move onto a few special function related concepts that are important from a programmer’s point of view.

We can also pass constant parameters to functions using the ‘const’ keyword. When a parameter or reference is const, it cannot be changed inside the function.

Similarly, we can also have const return-type. In this case, also, the return type cannot be modified.

Let us see a code Example that uses const references.

If we try to modify the values of a or b inside the function, then the compiler will issue an error.

We know that in order to make a function call, internally it involves a compiler storing the state of the program on a stack before passing control to the function.

When the function returns, the compiler has to retrieve the program state back and continue from where it left. This poses an overhead. Hence, in C++ whenever we have a function consisting of few statements, there is a facility that allows it to expand inline. This is done by making a function inline.

Some compilers detect smaller functions and expand them inline even if they are not declared inline.

Following is an Example of an Inline Function.

As shown above, we precede the function definition with a keyword “inline” in order to make a function inline.

This is shown in the following Example.

This was all about the basics of functions in C++.

We will explore more about the static functions in C++ in our upcoming tutorials.