This In-Depth Tutorial Explains Some of The Key Differences Between Two Object-Oriented Programming Languages C++ Vs Java:

C++ and Java both are object-oriented programming languages. Yet, both languages differ from each other in many ways.

C++ is derived from C and has the features of both procedural and object-oriented programming languages. C++ was designed for application and System development.

Java is built upon a virtual machine which is very secure and highly portable in nature. It is grouped with a comprehensive library to provide support for the abstraction of the existing platform.

Java was mainly designed for application programming and has a functionality of an interpreter for printing systems which was later developed into network computing. 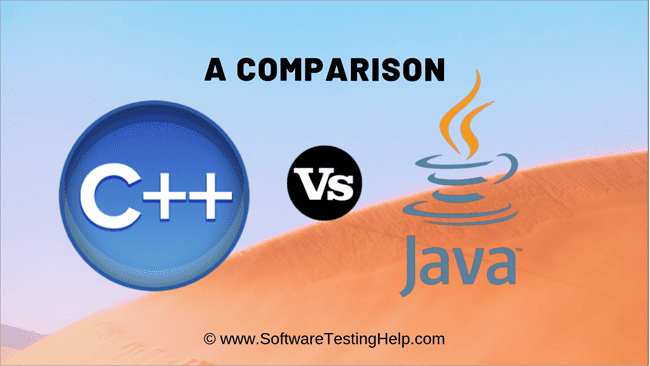 Key Differences Between C++ Vs Java

Now let us discuss some of the key differences between C++ Vs Java, as we proceed in this
tutorial.

C++ is procedural as well as an object-oriented programming language. Hence it does not follow any specific root hierarchy.

Java is a pure object-oriented programming language and has a single root hierarchy.

In C++, both the source code and filename do not have any relationship. This means that we can have many classes in the C++ program and the filename can be anything. It need not be the same as the class names.

For Example, if we have a class in Java named salary, then the filename which contains this class code should be “salary.java”.

The concept behind C++ programs is written once and compile anywhere as C++ is not platform-independent.

On the contrary, for Java programs it is written once, run everywhere and anywhere as the byte code generated by Java compiler is platform-independent and can run on any machine.

#14) Compatibility With Other Languages

C++ is built upon C. C++ language is compatible with most of the other high-level languages.

Java is not compatible with other languages. As Java was inspired by C and C++, its syntax is similar to these languages.

Java has no direct call support to its native libraries. We can call the libraries through Java Native Interface or Java Native Access.

Features related to the procedural languages and object-oriented language are the distinguishing features of C++.

Automatic garbage collection is the distinguishing feature of Java. Meanwhile, Java does not support destructors.

As far as type semantics for C++ are concerned, primitive and object types are consistent.

But for Java, there is no consistency between the primitive and object types.

C++ uses cin and cout along with ‘>>’ and ‘<<’ operators respectively to read in and write the data.

In java, the System class is used for input-output. To read the input, System.in which reads one byte at a time is used. The construct System.out is used to write the output.

C++ has a flexible model for objects with access specifiers controlling the access and strong encapsulation ensuring protection.

Java has a comparatively cumbersome object model with weak encapsulation.

C++ supports the goto statement, but its use should be minimized in order to prevent the consequences of using it in a program.

Java does not provide support for the goto statement.

Scope resolution operator is used to access the global variables and define methods outside the class.

In contrast, Java doesn’t support the scope resolution operator. Java also doesn’t allow defining the functions outside. Everything related to the program including the main function needs to be inside a class.

In C++, we can exclude the try/catch block even if we know that the code might throw an exception.

However, in Java, if we are sure that the code will throw an exception, then we must include this code under the try/catch block. Exceptions are different in Java as it doesn’t support destructors.

In C++ the runtime error detection is the programmer’s responsibility.

In Java, the runtime error detection is controlled by the system.

Because of its proximity to hardware, and libraries that allow accessing system resources, C++ is more suitable for system programming although we have a wide range of applications including database, enterprise, gaming, etc. developed in C++.

C++ has a global scope as well as namespace scope. Thus data and functions can exist outside the class as well.

In Java, all data and functions need to be in the class. There is no global scope, however, there can be package scope.

Java, however, does not support structures or unions.

In C++ objects are managed manually. The creation and destruction of objects are carried out manually using the new and delete operators respectively. We also use constructors and destructors for class objects.

Java does not support destructors though it supports constructors. Java is also heavily dependent on automatic garbage collection for collecting and destroying objects.

Pass by Value and pass by reference are the two important parameter passing techniques used in programming. Both Java and C++ supports both these techniques.

C++ is close to hardware and has many libraries that can manipulate the hardware resources. Because of its closeness to hardware, C++ is often used for system programming, gaming applications, operating system, and compilers.

Java is mostly an application development language and is not close to the hardware.

Given below is the tabular representation of the comparison between C++ and Java which we have already discussed.

So far we have seen the key differences between C++ and Java in detail. The upcoming section will answer some of the frequently asked questions pertaining to C++ and Java in the programming world.

Answer: Well, we cannot definitely say which is better. Both C++ and Java have their own merits and demerits. While C++ is mostly good for system programming, we cannot do it with Java. But Java excels in applications like web, desktop, etc.

In fact, C++ can do anything from system programming to enterprise to gaming. Java can do more of a web or enterprise. There are some applications like certain low-level programming applications or gaming etc. which cannot be left for Java to develop.

Answer: Again this is a tricky question! When it comes to how easier is the syntax or learning the language, Java scores. When it comes to system programming and/or other low-level applications, C++ is more powerful.

Some people might argue that having automatic GC collections, no pointers, no multiple inheritances make Java more powerful.

But when it comes to speed, C++ is powerful. Also in applications like gaming where we need to store the state, automatic garbage collection can ruin the tasks. Thus C++ is obviously powerful here.

Once we know the fundamentals of programming and object-oriented programming concepts, we can begin learning Java.

Like for example, both C++ and Java are object-oriented programming languages. They can be used for application development. They have similar syntax.

But in other cases like memory management, inheritance, polymorphism, etc., C++ and Java are completely different. Similarly, when it comes to primitive data types, object handling, pointers, etc. both the languages are different.

C++ and Java are both object-oriented programming languages. In addition, C++ is a procedural language as well. There are some features like inheritance, polymorphism, pointers, memory management, etc. in which both the languages completely differ with one another.

There are some characteristics of C++ like closeness to hardware, better object management, speed, performance, etc. which makes it more powerful than Java and thus motivate the developers to use C++ for low-level programming, high-speed gaming applications, system programming, etc.