In real-time programming, we deal with large chunks of data that cannot be accommodated from standard Input-Output devices. Hence we need to make use of secondary storage for storing data. Using secondary storage we usually store data in the form of files.

We can read data from files or write data into files by using a sequence of data called streams either in the text or binary format. There are various input /output and other operation related to files in C++. This tutorial explains these operations related to files using various classes. 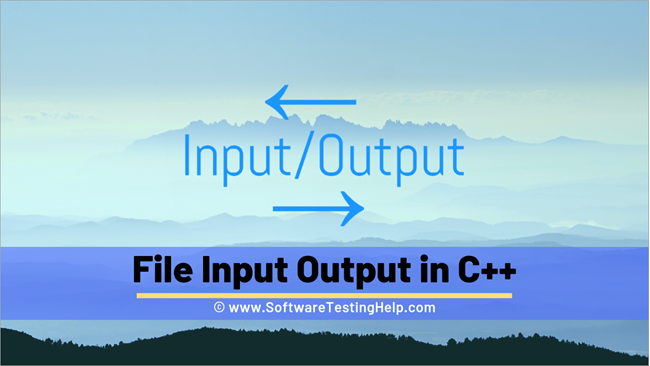 When it comes to file operations, C++ has a different set of classes that can be used.

These classes are described as below:

The following operations are supported, in C++ File Handling:

Let us see each of these operations in detail!!

Associating object of one of the stream classes to a file either for reading or writing or both is called opening a file. An open file is represented in code by using this stream object. Thus any reading/writing operation performed on this stream object will be applied to the physical file as well.

The general syntax to open a file with the stream is:

filename => The string containing path and name of the file to be opened.

mode => Optional parameter indicating the mode in which the file is to be opened.

C++ supports various modes in which the file can be opened. We can also specify a combination of these modes using the OR operator.

For Example, if we want to open a file “myfile.dat” for appending data in binary mode, then we can write the following code.

As already mentioned, the mode parameter is optional. When we open a file without specifying the second parameter, an open member function of ofstream, ifstream or fstream has a default mode to open the file with.

These are given as follows:

So, if we do not specify the second parameter in the open function, depending on the stream class used, the file is opened with the default mode.

We can use the close function to close a file and release the resources held by the file when we are done with the input and output operations on a file.

Function to close a file is:

So, when we are done with the operations on the above file myfile, we can close the file as follows:

Once the file is closed using the close function, the file object associated can be re-used to open another file.

Reading From A File

We can read the information from a file line by line using the stream extraction operator (>>). This is similar to reading input from the standard input using cin. The only difference being in case of files, we use ifstream or fstream object instead of cin.

Sample code for reading from a file is given below:

In the above code, we open a file and using the stream extraction operator (>>), we read the contents of the file. Once done with reading, we can close the file.

Writing To A File

Here, we read a line from the input and write it to a file that was opened with the ofstream object.

In the code example below, we provide a demonstration of all the file handling operations.

Writing to the file
Enter your name: Ved
Enter your age: 7
Reading from a file
Ved
7

In the above program first, we open a file in the write mode. Then we read data i.e. name and age and write it to a file. We then close this file. Next, we open the same file in the read mode and read the data line by line from the file and output it to the screen.

Thus this program covers all the file I/O operations.

There are some member functions that are used to check the state of the file. All these functions return a Boolean value.

We have tabularized these functions as follows:

Get/Put And Other Special Operations

The file I/O streams that we have seen so far have an internal get and put positions similar to the other I/O streams like iostream.

Incidentally, fstream has both get and put positions.

These functions are listed below:

The parameter direction given in the above function prototypes is an enumerated type of type seekdir and it determines the point from which the offset is counted.

It can have the following values.

Let us see a complete Example that demonstrates the usage of these functions.

As shown in the above program, we have a file created in which we write a line of text. Then using the various functions described above, we display various positions of the File Pointer.

In this tutorial, we have seen the various file operations to open, close and read/write data from/to a file.

We have also seen the functions to change the file pointer in order to access specific positions in the file. In our subsequent tutorials, we will discuss a few more important topics related to C++.