Sorting is a technique that is implemented to arrange the data in a specific order. Sorting is required to ensure that the data which we use is in a particular order so that we can easily retrieve the required piece of information from the pile of data.

If the data is unkempt and unsorted, when we want a particular piece of information, then we will have to search it one by one every time to retrieve the data. 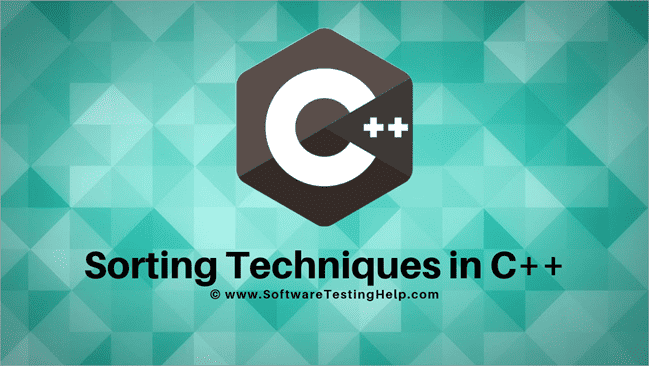 Thus it is always advisable that we keep our data arranged in a specific order so that information retrieval, as well as other operations performed on the data, can be done easily and efficiently.

We store data in the form of records. Each record is made up of one or more fields. When each record has a unique value of a particular field, we call it a key field. For Example, in a class, Roll No can be a unique or key field.

We can sort the data on a particular key field and then arrange it in ascending/increasing order or in a descending/decreasing order.

Similarly, in a telephone dictionary, every record consists of the name of a person, address and telephone number. In this, the telephone number is a unique or key field. We can sort the data of the dictionary on this telephone field. Alternatively, we can also sort data either numerically or alphanumerically.

When we can adjust the data to be sorted in the main memory itself without any need of another auxiliary memory, then we call it as Internal Sorting.

On the other hand, when we need auxiliary memory for storing intermediate data during sorting, then we call the technique as External Sorting.

In this tutorial, we will learn the various sorting techniques in C++ in detail.

Bubble sort is the simplest technique in which we compare every element with its adjacent element and swap the elements if they are not in order. This way at the end of every iteration (called a pass), the heaviest element gets bubbled up at the end of the list.

Given below is an Example of Bubble Sort.

Array to be sorted: 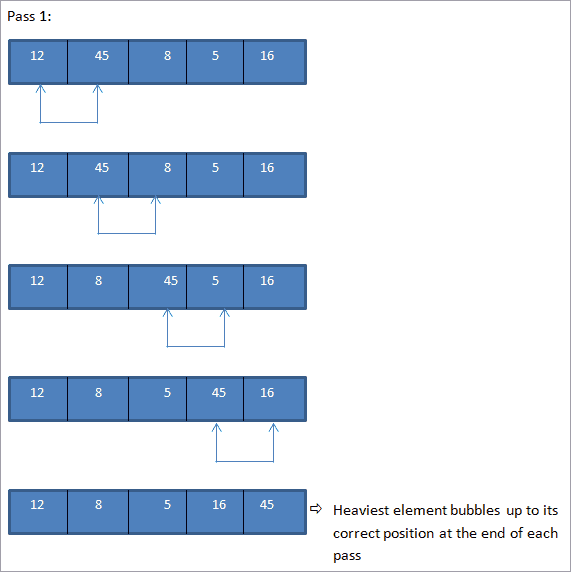 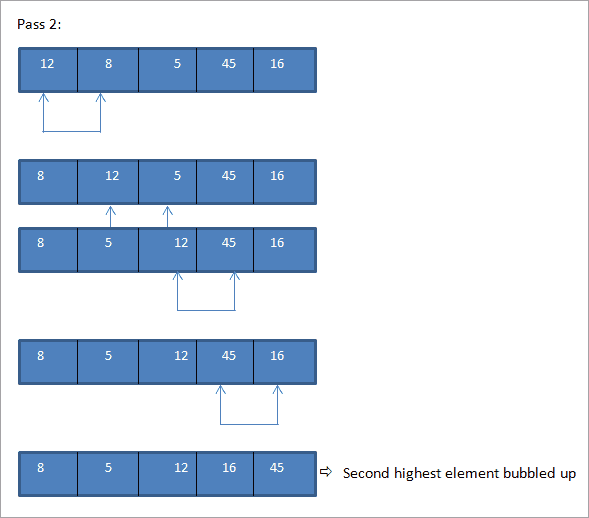 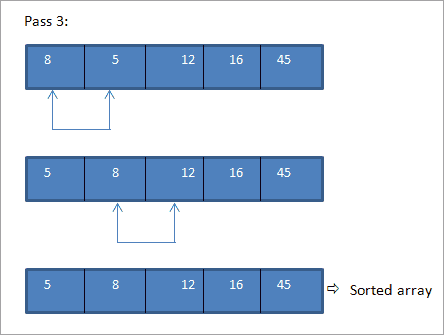 As seen above since it’s a small array and was almost sorted, we managed to get a completely sorted array in a few passes.

As seen from the output, in bubble sort technique, with every pass the heaviest element is bubbled up to the end of the array thereby sorting the array completely.

Let us take the same array as in the previous example and perform Selection Sort to sort this array. 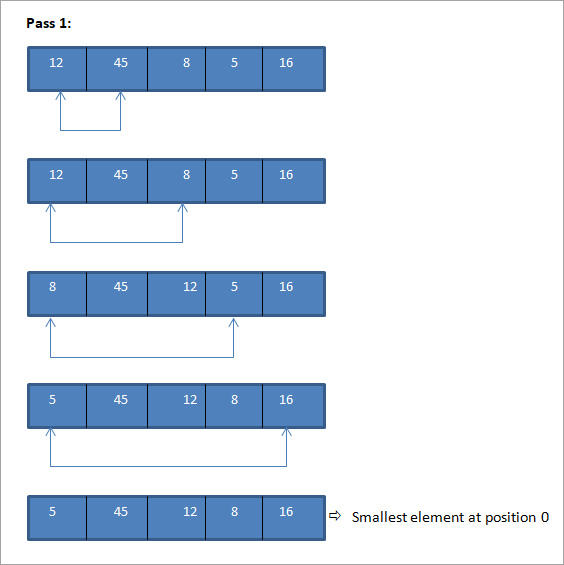 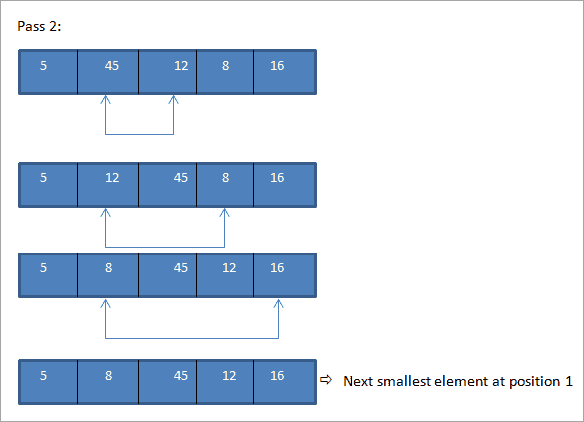 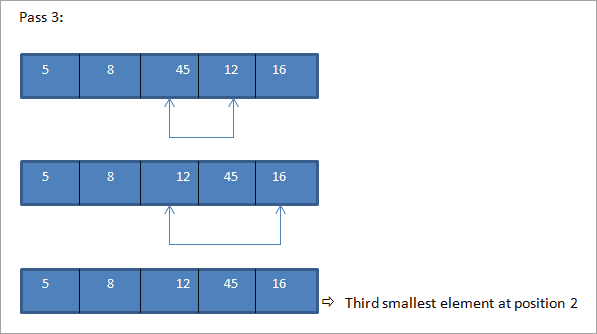 As shown in the above illustration, for N number of elements we take N-1 passes to completely sort the array. At the end of every pass, the smallest element in the array is placed at its proper position in the sorted array.

Next, let us implement the Selection Sort using C++.

In selection sort, with every pass, the smallest element in the array is placed in its proper position. Hence at the end of the sorting process, we get a completely sorted array.

The above three sorting techniques are simple and easy to implement. These techniques perform well when the list size is smaller. As the list grows in size, these techniques do not perform that efficiently.

The technique will be clear by understanding the following illustration.

The array to be sorted is as follows:

Now for each pass, we compare the current element to all its previous elements. Thus in the first pass, we start with the second element. 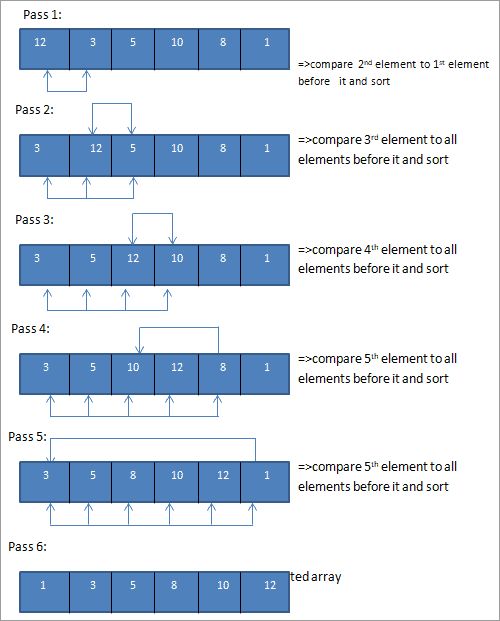 So we require N number of passes to completely sort an array containing N number of elements.

Quicksort is the most efficient algorithm that can be used to sort the data. This technique uses the “divide and conquer” strategy in which the problem is divided into several subproblems and after solving these subproblems individually are merged together for a complete sorted list. 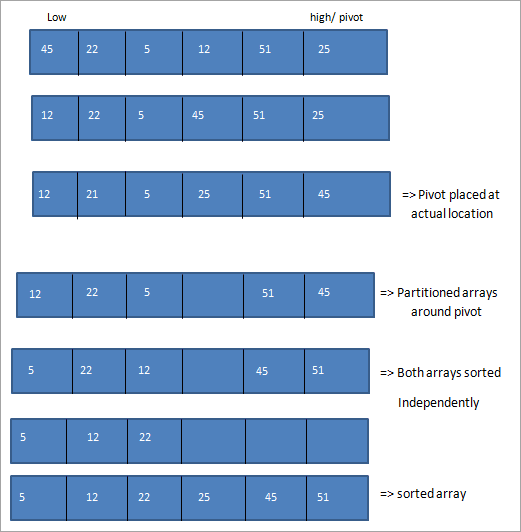 The key to Quicksort is the selection of the pivot element. It can be first, last or the middle element of the array. The first step after selecting the pivot element is to place the pivot in its correct position so that we can divide the array appropriately.

In the quicksort implementation above, we have a partition routine which is used to partition the input array around a pivot element which is the last element in the array. Then we call the quicksort routine recursively to individually sort the sub-arrays as shown in the illustration.

This is another technique that uses the “Divide and conquer” strategy. In this technique, we divide the list first into equal halves. Then we perform merge sort technique on these lists independently so that both the lists are sorted. Finally, we merge both the lists to get a complete sorted list.

Merge sort and quick sort are faster than most other sorting techniques. Their performance remains intact even when the list grows bigger in size.

Let us see an illustration of Merge Sort technique. 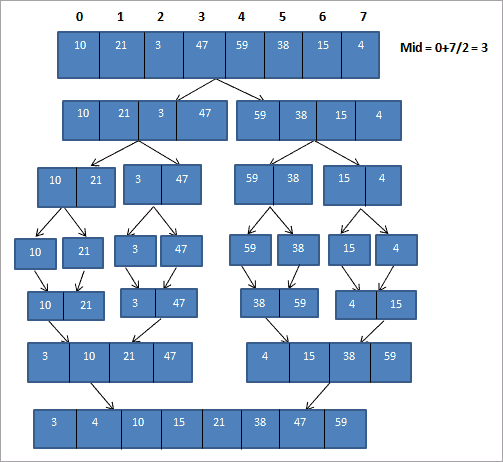 In the above illustration, we see that the merge sort technique divides the original array into subarrays repeatedly until there is only one element in each subarray. Once this is done, the subarrays are then sorted independently and merged together to form a complete sorted array.

Enter number of elements to be sorted:5

Shell sort is an extension of the insertion sort technique. In Insertion sort, we only deal with the next element whereas, in shell sort, we provide an increment or a gap using which we create smaller lists from the parent list. The elements in the sublists need not be contiguous, rather they are usually ‘gap_value’ apart.

If we provide a gap of, then we will have the following sub-lists with each element that is 3 elements apart.

We then sort these three sublists. 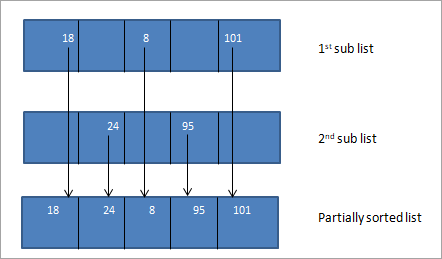 The above array that we have obtained after merging the sorted sub-arrays is nearly sorted. Now we can perform insertion sort on this array to sort the entire array. 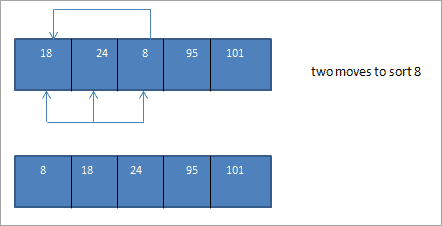 Thus we see that once we divide the array into sublists using the appropriate increment and then merge them together we get the nearly sorted list. The insertion sort technique on this list can be performed and the array is sorted in fewer moves than the original insertion sort.

Given below is the implementation of the Shell Sort in C++.

Array to be sorted:

Shell sort thus acts as a huge improvement over insertion sort and doesn’t even take half the number of steps to sort the array.

Heapsort is a technique in which heap data structure (min-heap or max-heap) is used to sort the list. We first construct a heap from the unsorted list and also use the heap to sort the array.

Heapsort is efficient but not as quick or the Merge sort.

So far we have briefly discussed all the major sorting techniques with an illustration. We will learn each of these techniques in detail in our subsequent tutorials along with various examples to understand each technique.

Sorting is required to keep the data sorted and in proper order. Unsorted and unkempt may take a longer time to access and thus might hit the performance of the entire program. Thus for any operations related to data like accessing, searching, manipulation, etc., we need the data to be sorted.

The sorting techniques allow us to sort our data structures in a specific order and arrange the elements either in ascending or descending order. We have seen the sorting techniques like the Bubble sort, Selection sort, Insertion sort, Quicksort, Shell sort, Merge sort and Heap sort. Bubble sort and Selection sort are simpler and easier to implement.

In our subsequent tutorials, we will see each of the above-mentioned sorting techniques in detail.