Check Out The Various Type Conversions Supported In C++.

We hope you should be aware of all the data types that are available in C++ from our earlier tutorials. At times, a need may arise such that we need to convert one type to another. This is called type conversion or type-casting.

In this tutorial, we will discuss the various type conversions supported in C++. 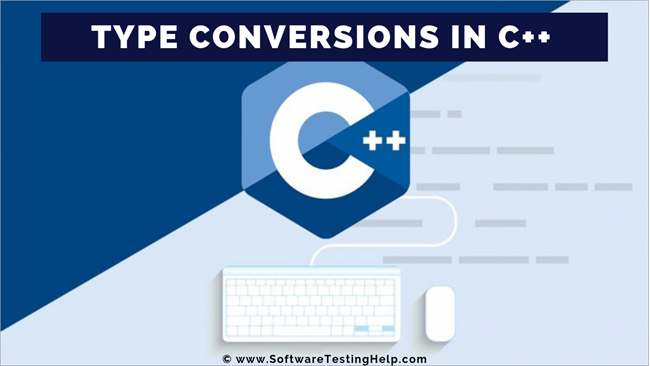 Now we will see both the types of type conversion in detail.

In implicit conversion, the compiler carries out the conversions from one data type to another whenever an expression has more than one data type. In order to prevent loss of data, all the variables of the other data types are converted to the largest data type. This is called promotion.

As integer is the larger type in this expression, the character variable value ‘A’ is converted to its integer equivalent i.e. value 65(ASCII value). Thus the result of the expression is 75.

In the next expression, we add integer and character (‘a’ ->97) and then assign the result to float. Thus the result of the expression is implicitly converted to float by the compiler.

In the third expression, a short int variable is converted to integer implicitly.

Note: In case of implicit conversions, if the compiler detects a potential loss of data, then it might flash a warning to this effect.

Explicit conversion is also known as “type-casting” as we ‘cast’ one data type to another data type. Here, the users explicitly define the casting, unlike implicit conversion where the compiler internally carries out the conversion.

We can perform Explicit conversion in two ways:

The general syntax is:

The Following Example explains this:

We have shown explicit casting using the assignment operator in the above example. First, we cast the variable salary of type double to an integer type. Next, we cast the integer variable sum to a double type.

As shown in the output, the type to which we cast indicates the final type of the result of the expression.

This is advantageous as the user can change the type of expression as per the requirements.

In this type of casting, we use a “cast operator” which is a unary operator to change from one type to another.

We have the following types of casting depending on the cast operator we use:

Apart from the above-listed conversions, the static cast is also able to convert any pointer to void*.

The static cast is the compiled time cast. This means there is no check made at runtime to see if the cast performed is valid or not. Thus it remains the responsibility of the programmer to ensure that the conversion was safe and valid.

In other words, the user has to ensure that the object converted was full with respect to the destination data type.

We specify a static cast as follows:

Thus in the above example, we have computed the value of type double. Then we apply a static_cast to this value to convert it to an integer type. In the output, we see that the value is truncated after we cast it to int.

Now let us modify the above code as follows:

When we compile this program we get the following output.

The dynamic cast uses a mechanism known as RTTI (Runtime Type Identification). RTTI makes all the information about the object’s data type available at runtime and is available only for the classes that have at least one virtual function (polymorphic type). RTTI allows determining the object type at runtime or at the time of execution.

Let us try one Example to understand Dynamic cast.

In this program, we have defined two classes, base with a virtual function and derived having a base class, base.

As in the base class, the base is polymorphic (contains virtual function), the dynamic_cast is successful.

Note: If we remove the virtual function from the above class, then dynamic_cast will fail as RTTI information for the objects will not be available.

The dynamic cast has an overhead of type-safety at runtime.

This type of cast is most dangerous to use as it works on any type of object without the classes being related to each other.

Reintepret_cast works on any pointers and it converts a pointer of any type to any other type irrespective of whether the pointers are related to each other or not. It does not check if the pointer or the data pointed to by the pointer is same or not.

The cast operator <reinterpret_ cast> takes only one parameter, the source pointer to convert to and does not return any value. It simply converts the pointer type.

We should not use <reinterpret_cast> unless required. We usually typecast the source pointer to its original type.

Let us see an Example of Reinterpret cast:

In the above example, we have declared an integer pointer ptr pointing to value 97. Next, we declare a character pointer ch and cast ptr to it using <reinterpret_cast>.

Next, we print various values. The first we print is ptr that points to an integer location. Hence it prints an address.

The cast operator <const_cast> is used to change or manipulate the constness of the source pointer. By manipulation, we mean that it can be either to set constness to a non-const pointer or remove constness from a const pointer.

The condition to successfully cast <const_cast> operator is that the pointer and the source which is cast should be of the same type.

Let us take an example to understand this.

In this example, we see that the function ‘printVal’ accepts a non-const pointer. In the main function, we have a const variable ‘value’ assigned to the const pointer ptr.

In order to pass this const pointer to the function printVal, we cast it by applying <const_cast> in order to remove the constness. Then we pass the pointer ptr_cast to the function to get the desired results.

With this, we will wrap up this topic of type conversion in C++. We have seen all about implicit and explicit conversions that are used in C++.

However, one should be aware that in order to prevent loss of data and other such difficulties, conversions or typecasting should be applied wisely only if the situation necessitates the use.