Learn all about the various types of inheritance in Java with the help of simple examples. Find out if Java supports multiple inheritance:

We introduced Inheritance in Java along with the various basic concepts related to inheritance to the readers in our last tutorial.

In this tutorial, we will explore further into the inheritance topic and learn more about the types of inheritance. 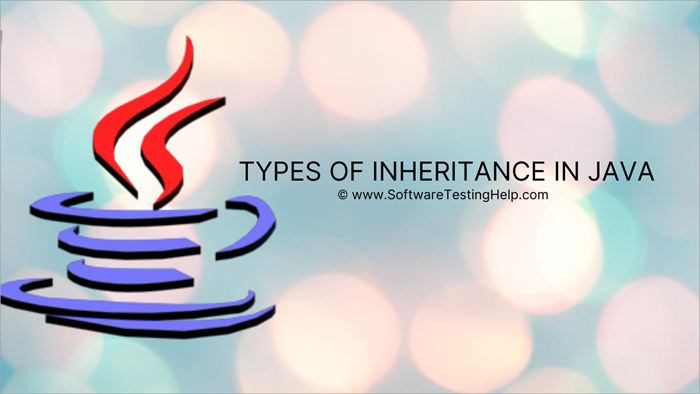 Types Of Inheritance In Java 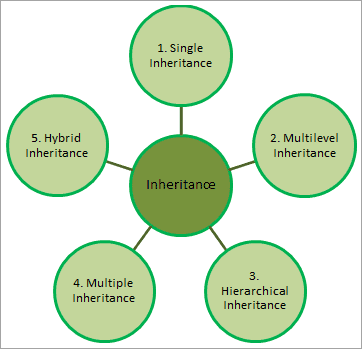 As shown in the above figure, there are five types of inheritances in Object-Oriented programming as described below:

#1) Single Inheritance: When a derived class or subclass inherits from only one base or superclass then it is single inheritance.

#3) Hierarchical Inheritance: An inheritance hierarchy is formed in this type of inheritance when a superclass is inherited by more than one class.

#4) Multiple Inheritance: Multiple inheritance is the one in which a class can inherit properties and behavior from more than one parent.

#5) Hybrid Inheritance: When one or more types of inheritance are combined, then it becomes a hybrid inheritance.

Note that Java supports only single, multilevel, and hierarchical type of inheritance using classes. Java does not support multiple and hybrid inheritance with classes.

Now we will discuss each type of inheritance in detail with programming examples.

A single inheritance is depicted as shown below: 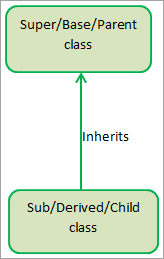 Given below is a Java program that explains Single Inheritance.

Here, we have one method eat (Action_eat) in base class Animal which is common to Animal species. We have a derived class Dog that derives from Animal class. In the Dog class, we have a method specific to Dog species, bark (Action_bark).

Then we create a Dog object in the main method and as the Dog class has inherited the Animal class, this object can call eat as well as bark method.

In multi-level inheritance, we have a chain of inheritance. This means that we have a parent class that is inherited by a derived class. Derived class in turn acts as a parent to another class and so on.

The multi-level inheritance can be represented as below:

An example program for Multilevel Inheritance is shown below.

We have programmed the exact chain shown above. Then in the main method, we create an object of class C. The class C object then can access the methods of its parent B as well as grandparent A.

The hierarchical inheritance is diagrammatically represented below:

As an example of hierarchical inheritance, we can represent Animal class as a superclass and then have more than one animal like Cat, Dog, Cow, etc. derived from it.

The Java program below demonstrates the Hierarchical Inheritance in Java.

As we see from the program we have a parent class and three child classes derived from this parent. In the main method, we create an object of each of the child classes and call their respective member methods.

The diagrammatic representation of Multiple Inheritance is shown below: 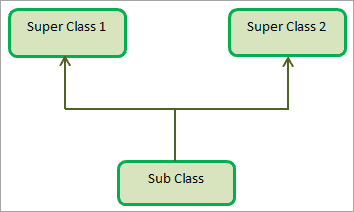 As shown above, we can derive a class from more than one class simultaneously. This way the derived class will acquire the features of all of its parent classes. This may give rise to serious ambiguities especially when the features inherited are the same.

Hybrid inheritance is a combination of one or more types of inheritances that we have discussed above. Any combination however results in a type of multiple inheritance that is not supported by Java.

A hybrid inheritance can be diagrammatically represented as below. 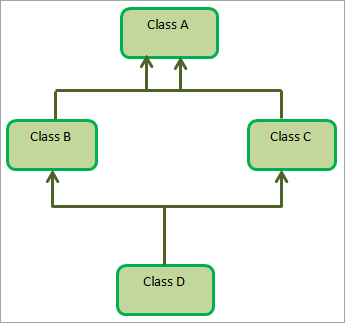 Java aims at simplicity in programs. This applies even to OOP features. So when it comes to multiple inheritance, some ambiguous situations may arise when we derive a class from more than one class.

Now let’s understand the problems that may arise when we have multiple inheritance in our program. 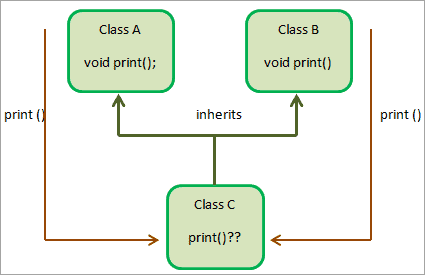 If we see the above system, it is self-explanatory. Here class A and class B are two-parent classes inherited by class C. Now we have shown that both the classes A and B have a method with the same name i.e. print (). So when class C inherits A and B, then it will get both the versions of the print () method.

In this case, class C will not know which method it should inherit. This is the ambiguous situation we mentioned above that arises in the case of multiple inheritance.

Hence, Java issues a compiler error when the class inherits from more than one class.

The following Java program will demonstrate this.

As seen from the output, the Java compiler issues an error when it finds that the class extends two classes.

Although Java does not allow two classes to be inherited simultaneously, it does offer us a way around this limitation. We can simulate multiple inheritance using interfaces instead of classes. We will discuss this in our subsequent tutorials.

Consider that we have the following inheritance system.

We can represent this system diagrammatically as shown below: 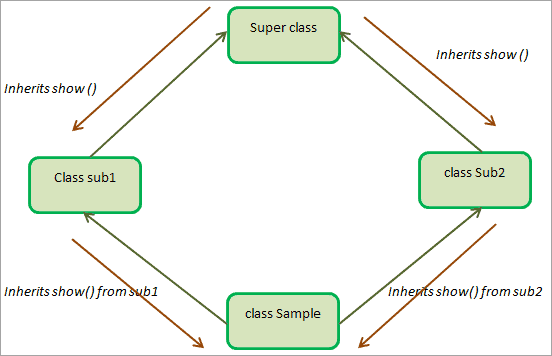 As we can see from the above diagram, the entire inheritance system appears in a diamond shape. Because of this diamond structure, the ambiguity is named the “Diamond Problem”.

As with multiple inheritance, the diamond problem can also be resolved using interfaces.

A class inheriting itself to form a cycle is called Cyclic Inheritance.

The above situation forms a loop. This is not permitted in Java.

We have already learned in the “Access modifiers” topic that members with private access cannot be inherited.

Rule#4: Constructors are not inherited

As constructors are used for creating class objects, they are not inherited from one class to another.

Rule#5: We can use parent reference to access child objects

We have already seen various examples of inheritance. We can create a reference of type parent class and then assign it a derived class object created using the new keyword.

If super is a superclass and sub is class derived from super as shown below.

Q #1) Which type of inheritance is not supported by Java?

Q #2) Which of the members of the class can be inherited?

Answer: A class can inherit public and protected members of its base class but cannot access the private members of the base class.

Q #3) Why is Multiple Inheritance not allowed?

Answer: Multiple inheritance results in ambiguity when two-parent classes have methods with the same prototype. In this case, the derived class faces an ambiguity regarding from which base class should it inherit the method.

Q #4) Why do you need Multiple Inheritance?

Q #5) What is the major use of Multilevel Inheritance?

Answer: A class derived from another class which in turn is derived from a third class is said to exhibit multilevel inheritance. The levels in this type of inheritance can be extended to any number as long it maintains clarity and simplicity.

Then we discussed the various rules that we should follow while implementing inheritance in Java. With this, we have completed our discussion on the IS-A relationship in Java.