Role And Importance Of Decision Making Constructs In C++.

In programming, it is required that we just don’t keep on executing the statements one by one. Rather there will be a situation when we have to check some conditions and accordingly, if the condition is true or false, we need to execute a different block of statements.

In other words, while programming, we need to take care of decision making as well. In this tutorial, we will explore the decision-making constructs in C++. 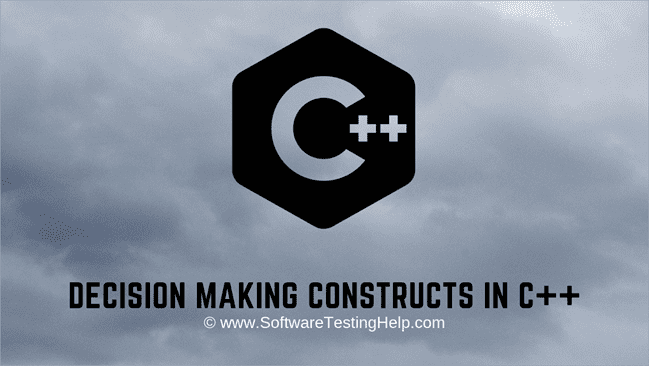 Like other programming languages, C++ also has various decision-making constructs which aid the programmer in decision making, as a result of which the programmer can make correct decisions and execute the appropriate block of statements to achieve the desired results.

Next, we will discuss the important decision-making constructs present in C++.

The general syntax of ‘If’ statement is given below:

This is the basic decision-making construct. The condition inside the ‘if’ construct is evaluated. If it is true the statement block inside the braces following the ‘if’ statement is executed.

If the condition is false, then the statement block is skipped and control is passed to the statements following the ‘if’ block.

The flow diagram for the ‘if’ statement is given below. 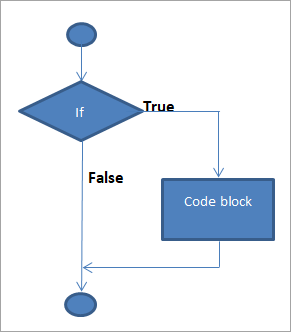 Let us take an example to demonstrate the ‘if’ decision construct.

You have entered the correct number

In the above program, we make use of ‘if’ construct to determine if the number entered is between 1 and 10.

The general syntax for the same is given below.

Flow diagram for the ‘if-else’ construct is shown below.

To understand the ‘if-else’ statement, let us consider the following Example.

In this program, we will check if the character is ‘S’ and accordingly we print the message.

Depending on whether the condition is true or false, the statement block or another condition is checked. This is shown in the general syntax of this construct below.

As shown above, there are multiple ‘if’ statements in the else part of the first ‘if’ statement. The last level in the construct is the ‘else’ statement which executes the default statement.

Flow Diagram of Else if Statement 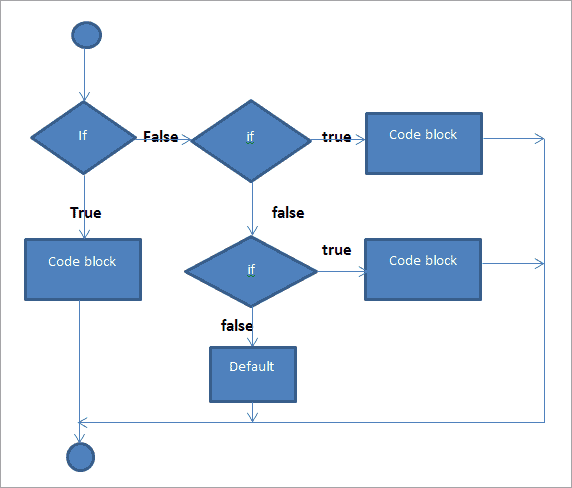 Let us see an example of this construct.

By term ‘Nested If’, we mean one or more ‘if’ statements inside another ‘if’ statement. We can have any form of ‘if’ statement like simple if, if-else, else-if or another nested if depending on our requirements.

Given below is the general syntax of the nested if and also the flow diagram.

Flow Diagram of Nested If Statement: 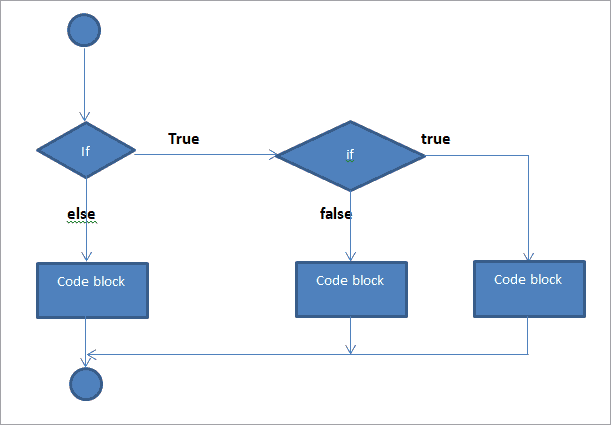 Let us see an example that demonstrates the Nested-if Statement:

As our programs get more complex, we tend to have more and more conditions to test, and if we still use ‘if’ statements, there will be numerous ‘if’ statements which will be difficult to handle and thereby make our program unreadable.

In order to avoid this, we have a new construct named ‘Switch statement’ which allows us to test a condition and have multiple options/cases that can change the flow of execution.

The general syntax for the switch statement is given below:

As shown in the above syntax, the switch conditional expression should be the one that evaluates to a constant value. Expressions evaluating variable values are not valid. We have ‘n’ cases for the switch statement and a default case. Note that the default case will be executed when the expression does not match any of the cases provided.

The flow diagram for the Switch Statement is given below: 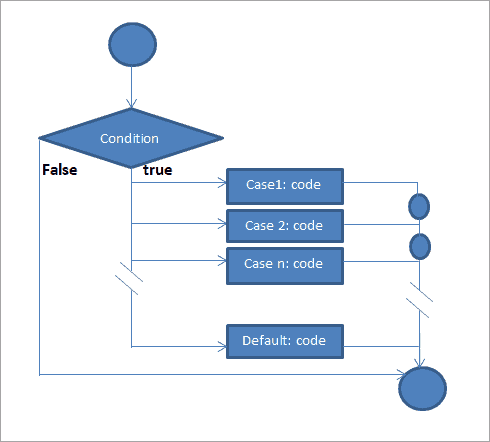 Following is an example program for the Switch Statement.

Enter an uppercase vowel character: U
Character entered is U

In the above program, we check if the character entered is an English vowel. For this, we have specified the vowel cases and a default case if in case a character other than vowel is entered.

The general syntax for the goto statement is:

The flow diagram for the Goto Statement is shown below: 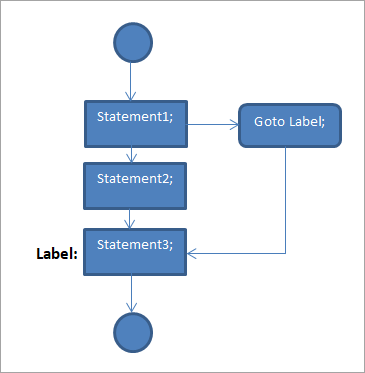 The ‘goto’ statement allows us to jump to any part of the program. However, the use of ‘goto’ is considered to be a bad programming practice and we should avoid it as much as possible.

The main reason is jumping to other parts of the code using ‘goto’ statement can make our program more complex and unreadable. Instead, we can write far efficient programs using the break and continue statements.

Let us take an example of the ‘goto’ statement.

Number is greater than 0
Number is equal to 5

In the above program, we make use of ‘goto’ statement. We check if the number is less than or equal to 5 and if it is, we jump to a label named ‘labelfive’.

In our upcoming tutorial, we will discuss loops in C++ in detail. Loops in C++ are used to execute a code repetitively. We will also discuss break and continue statements and their uses with examples.