This C++ Libraries tutorial will explain what are Libraries in C++, their types along with installation and usage of a C++ Standard Library:

A library can be defined as a package of code or functions that is reusable. Various applications can use the same library again and again. By having libraries, we achieve reusability i.e. one of the principles of Object-Oriented Programming.

For example, mathematical functions like sin, cos, tan, abs, etc. can be made into a library. By doing this we don’t have to write these functions again and again for every application. We can just reference the library and reuse the code in our applications. 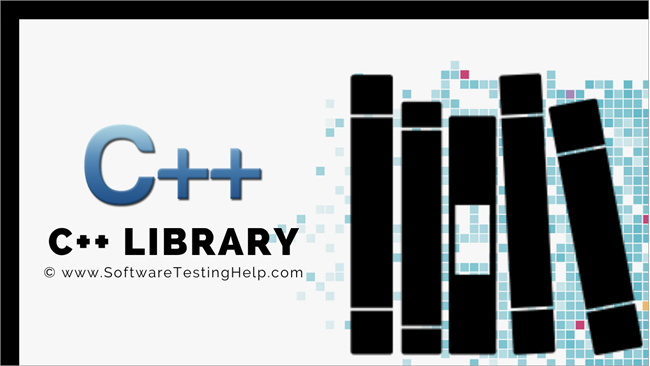 A C++ library usually consists of:

A header file: This defines the functionality that the library is offering.

In C++ we have two types of Libraries:

The static libraries on Windows usually have an extension “.lib” while those on Linux has extension “.a” (or archive).

This specific advantage results in a disadvantage as the executable can become bulky and too much space is wasted as the library is a part of the executable.

Another disadvantage of having a static library is that if the static library changes, then the executable referencing it needs to be updated as well.

The only disadvantage that a dynamic library has is that it requires a separate program to load and reference the library which can be cumbersome. To solve this problem, we use the “import library” routine.

How To Install And Use C++ Libraries

Let’s see some of the steps that we need to follow to install these libraries and use them in our application.

On windows, the libraries usually have .zip extension while on the Linux Operating system the library package is distributed as ‘.RPM’.

#3) Include the Library path for the Compiler

We need to set the path of the library so that the compiler knows where to look for the library files. This can be ‘include’ directory on Windows or ‘/usr/include’ on Linux.

As programmers mostly use IDEs for development, we specify the library path in the IDE itself.

Let’s discuss some of the standard headers or libraries the C++ language uses. We have already discussed these headers in their respective topics in our C++ tutorials.

The general C++ library includes the following headers as shown below.

We discussed C++ libraries in detail along with their types, and the steps to install and setup the library.

We came to know that the standard C++ library contains various headers that provide different functionalities. We can use these standard library headers to develop a variety of applications in C++.