We live in an era full of awesome and powerful programs. As such, there are hundreds of programming languages which if we had to study and master all of them, would take us our lifetime just to scratch the surface.

What exactly do programming languages do? The answer to this is that they allow us to give instructions to a computer in a language that the computer understands. Each programming language has its features, purpose, benefits, and drawbacks. However, many have some commonalities between them. 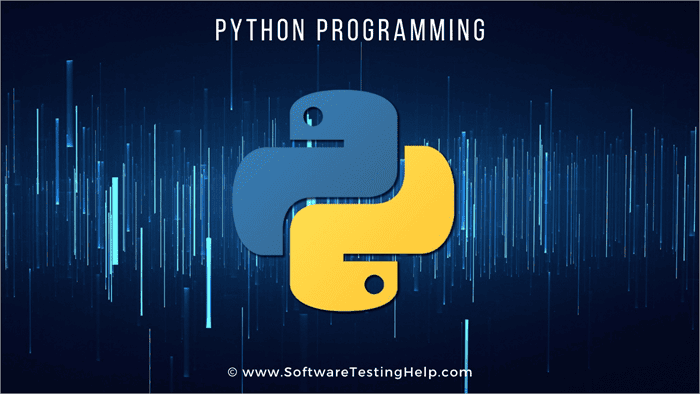 Tutorial #37: Python Array and How To Use Array In Python [With Examples]
Tutorial #38: Python Built-In Data Types: None And Numeric
Tutorial #39: Python Sets Tutorial With Programming Examples

Python is an open-sourced, interpreted, object-oriented, high-level programming language with dynamic syntax. It is highly attractive for Rapid Application Development and scripting.

Most importantly, it is readable, simple, easy to learn & use which indeed increases productivity and reduces the cost of maintenance.

It was initially formulated by Guido van Rossum in the late 1980s at Centrum Wiskunde & Informatica(CWI) in Netherland as a successor to the ABC language. The name Python was named after a BBC’s TV Show called ‘Monty Python’s Flying Circus‘ which he was a fan of.

The name was perfect at that time since he wanted a short, unique, and slightly mysterious name for his invention.

Table on Python versions 1.0 and 2.0 features and released date.

Python versions 2.x and 3.x are the most used Python versions. As of this writing, the latest stable version of Python is 3.9.0, released on October 5, 2020.

Since the first release in 1994, Python has had regular updates with new features and supports. The table below shows all Python releases as of this writing.

In this section, we shall look at where Python is being used, some benefits/drawbacks, and lastly how it is compared to other popular programming languages.

What Is Python Used For

As of now, Python has many libraries and frameworks ranging from Numpy, SQLALchemy, Pytorch, Pandas, Keras, Tensorflow, Django, Flask, etc. and it is still growing rapidly. These have made Python a top choice for many developers and companies.

Python is popularly used for Development, Scripting, and software testing which indeed has made it suitable for various domains.

Table on Domain where Python is used with description.

Benefits And Drawbacks Of Python

The various attractive features of Python make it popular and preferred in many fields.

Some of the top features of Python include:

Though Python is popular, it is not effective in some domains. Knowing these drawbacks will help us to limit Python to where it is effective, thereby building robust applications.

Some Drawbacks of Python are:

Python Vs Other Languages

Python is not the only outstanding and popular language out there. We have other interpreted languages like Java, JavaScript, C++, and much more that are often compared to Python.

In this section, we will briefly compare Python to other languages at the language level and not constraints such as cost, community size, emotional attachment, etc.

Differences between Python and other programming languages.

How To Learn Python

After having fallen in love with a programming language like Python, the next tricky question is “How to effectively learn Python”? The mistake most newbies make is to avoid this question and delve straight into learning the language.

A programming language like Python is rapidly growing and is used in many domains. Unless we want to be “Jack of all trades, master of none“, we need to address this question thoroughly.

Given below are the various steps that we can take to effectively learn Python from zero to hero.

#1) Explore The Usage Of Python

As we saw in one of the tables above, Python is used in so many interesting and promising domains. Learning Python without a clear idea of which domain we will like to focus on or build our next big project is like a boat without sails. Efforts and courage are not enough without purpose and direction.

Once we have explored the various domains and decided on which domain(s) to focus on, we can move on to the next step.

Before getting started with writing any code, it’s important to find out which IDEs and code editors are tailored to make Python editing easy and comfortable.

Choosing the right IDE or text editor will enable us to focus more on being productive.

The most essential requirement to master a programming language is its syntax, at least to a basic level. It is just like the English language. We first learn the different verb tenses, then use them to construct sentences.

Python particularly is easy to learn due to its simple syntax and dynamism. Most Pythonistas compare its syntax to the English language. As we saw earlier, Python has two stable versions i.e. 2x and 3x. It is recommended to learn Python 3x, and not Python 2x as the industry no longer uses it.

However, it is important to know that Python 2x comes shipped with some operating systems like Linux, macOS.

While learning these syntaxes, it is important and recommended to make notes that can be referenced later. Also, the online documentation should be our first port of call for definitive information.

This step consists of getting our hands dirty with code. As the saying goes: “Practice makes perfect“. The mistake many newbies make is to think that reading the concepts alone is sufficient.

But, keeping a daily routine and being consistent will help us develop our muscle memory to master the art of coding faster than expected.

We have an awful lot of problem exercises and interview questions on all Python concepts. It will take us no time to search the internet for such questions and attempt to solve them. Applying all that we have learned while solving these problem exercises is the key to help us get familiar quickly with the syntax and concepts.

#5) Discus Experience With Others

The big news is that Python has a large and active community. Therefore, if you come across a problem that seems difficult to solve, then there is a chance that somewhere, someone has already solved this problem.

This step will expose us to some more advanced concepts of programming. However, with a strong foundation on the basics, it will be easy to wrap our hands around quickly.

The aim of this step is not to work on complex projects, but to work on projects that will require us to work on the domain we are interested in and also use everything that we have learned so far. This step helps us to use what we know in order to produce something meaningful.

The internet is full of some mini-projects for beginners which we can choose from. Some examples can be seen below. Make sure to search the internet for more details.

#7) Explore Libraries And Frameworks In Domain Of Interest

We have come to a very important step prior to working on our first big project or contributing to open-sourced projects. Python has a lot of libraries and frameworks that are used in all domains as we saw in one of the above tables.

Using libraries and frameworks will make our life painless while working on large, complex projects. So, it is essential to explore the various libraries/frameworks and decide on which to use before delving into any big project.

Some of the commonly used Python libraries/frameworks are:

This step is highly overlooked, but it is a very important aspect of learning that will help you to be at the top of new concepts, terminologies, and technologies. It is often said, teaching is the best way to learn, and to know if you understand something, is to teach others to understand what you know.

Sharing knowledge can be done in many ways such as writing articles, giving presentations, etc. Not only do these push us to do more research, but it also takes us from a proficient level to a master level.

Answer: Python and its gaming frameworks like Pygame are good for rapid game prototyping. It is also good for simple games but not good enough for performance-intensive games.

Answer: This will depend on what you want to do. Python is good for beginners as it has a simple syntax and it is easy to learn.

Also, compared to C++, Python has good frameworks for the web and also dominates in the domain of data science, machine learning, AI, etc.

Answer: Python is known to be a general-purpose programming language i.e. it can be used for various types of software development like front-end as well as backend.

In this tutorial, we looked at Python programming where we described what Python is and where it is being used.

We also looked at why and how we should learn Python, where we discussed some steps that could be adopted to take us from zero to hero in Python.

We hope that the list of Python training tutorials mentioned above would be a perfect guide for any beginner.

=> Start with the First Tutorial from here