A Brief Introduction To Classes And Objects In C++.

Class is a level higher than the object and represents the category of objects. Thus, class acts as a blueprint that outlines the object design and details. This includes data that is used to describe the object and various methods or functions that can act on the object data.

In this tutorial, we discuss all the details of class and objects in C++ along with their programmatic representation. 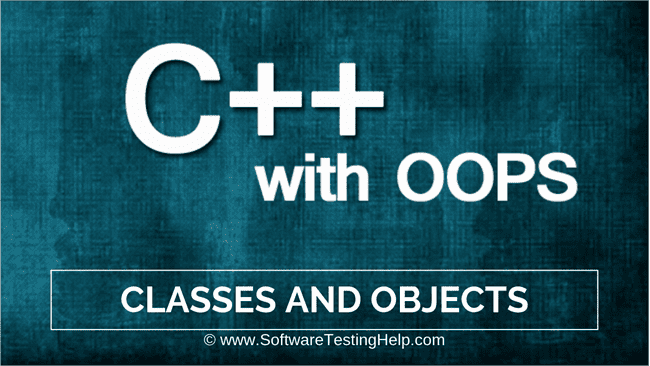 A class in C++ can be viewed as a blueprint or a skeleton of a particular entity. Class is a user-defined data type. It contains the general information or data for that particular entity and the functions that operate on that entity.

In C++ syntax, we define a class with keyword “class” followed by the name of the class.

The class name is followed by the details of the class enclosed in curly braces and is terminated by a semicolon.

The following block shows the general syntax for the class definition.

As shown in the above representation, the class can have access specifiers like public/protected/private. It can have data members and member functions. The data and functions are called as members of the class. By default, the members are private to the class, so that no outside entity has access to these members.

For Example, a vehicle can be a generalized class having properties like a model, color, chassis No., average_speed, etc. It can have functions like changeModel, accelerate, slowdown, etc. that perform actions on the data members. We can define a class named “vehicle” that will have all these data members and functions.

As already mentioned, a class is just a blueprint for the entities. It doesn’t take any space in memory when it’s defined. For a class to be functional, we have to define objects that can make use of the members of the class.

In order to use the class functionality, we need to instantiate the class to create an object. An object is an instance of a class. I simple words, we can say that an object is a variable of type class.

The general syntax to create an object is:

Once the object is created, it can be used to access the data members and functions of that class.

Accessing the members of the class (data and functions) is done using the dot (.) operator, which is also called as the member access operator.

If obj is the name of the object and there is a function “display ()” in the class, then the function can be accessed as “obj.display ()”.

However, there is a catch in the above statement. We can access the function display () using an object and the dot operator if the function is “public”.

In C++, accessing the data members and functions in the class depends on the access given to that particular data member or function using an access specifier.

When a member is private, it cannot be accessed outside the class. Not even using the object and the dot operator. The private data members can only be accessed using the member functions of the class.

However, there is an exception to this rule, which we will discuss in our later topics.

A data member or function that is defined as public in the class is accessible to everyone outside the class. These members can be accessed using the object and the dot operator.

A protected member of a class is accessible to the class itself and the child classes of that class.

This access specifier is especially used in case of inheritance and we will discuss this in detail while discussing the inheritance topic.

Let us take the following example to better understand these access specifiers.

In this program, we have two data members out of which var1 of type int is private (access specifier not specified. Default is private). Another member is the string name, which is declared as public. We have yet another function display which displays the value of both these members.

In the main function, we declare an object abc of class ABC. Then we set values to data members and also the call function display using object ‘abc’.

However, when the compiler encounters the line abc.var1 = 20; it will generate an error that “var1 is private variable”.

This is because we cannot access private data members of a class outside the class. Thus there is an error. But we can access it inside the function and therefore when we output the value of var1 in the display function; it does not throw any error.

Hence the output of the program displays the initial value with which var1 is declared.

So far, we have seen the details about classes, object, and access specifiers, now let us take up a complete example of a sample class student. This class has data members: student_id, student_name, and student_age. It also has member functions to read student info and display student info.

In order to make things easy for the readers, we have declared all members of the class as public.

Thus, we have a complete class defined above. The only notable difference is that we have defined one function “print_studentInfo” inside the class whereas other function “read_studentinfo” is defined outside the class. These are the two ways in which member functions can be defined for a class.

So far in this tutorial, we have created a simple object and then we assign values to each data member of the class in the main function after reading these values from the standard input.

Default constructor has the following syntax:

If a class does not have a default constructor then the compiler creates it.

A parameterized constructor function looks as shown below.

A parameterized constructor is used to overload constructors. We will see more about overloading in our later topics.

C++ supports a third type of constructor known as Copy constructor. Its general form is

As shown in the above declaration, in copy constructor a new object is created using the values of another object of the same class. The parameter that is passed to the constructor is the constant reference of an object whose values will be used for the construction of the new object.

A copy constructor is usually called in the following situations:

However, we cannot guarantee that copy constructor will surely be called in all the above cases as C++ compiler has a way to optimize copy operations.

A copy constructor carries out memberwise copy between objects. Just like default constructor, C++ compiler creates a default copy constructor if we do not provide one in our program. But when a class has certain data members like pointers, references or any runtime allocation of resources, then we need to have our own user-defined copy constructor.

The reason is that default copy constructor performs only a shallow copy of data members i.e. both objects will share the same memory location. This is fine for simple non-pointer data members.

However, when it comes to pointers or any other dynamic data members we would like the data to be pointed to a new memory location. This is the deep copy and can be achieved only using a user-defined copy constructor.

Given below a complete C++ program that implements all three types of constructors and their usage in constructing an object.

The screenshot for the same is given below. 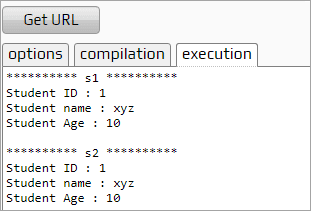 In this program, we have defined a class student which similar to one defined in the previous program. The difference is that instead of reading data member values from standard input through a function, we define three constructors.

Next, we define a copy constructor to which we pass a constant reference to an object of the student class.

We can also assign the values of one object to another using an assignment operator (=). In this case, we will have a statement like s1 = s.

Some of the characteristics of the destructor include:

The general syntax of a destructor is:

The destructor of a class is usually called in the following situations:

The example given below demonstrates the working of a destructor.

This is sample class

The screenshot for the above output is given below. 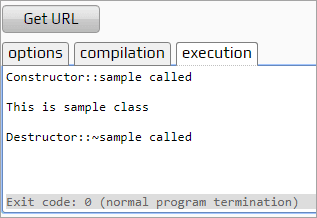 We know that every time when an instance of the class i.e. an object is created, a separate copy of the data members of the class is made for the object. But when it comes to the member functions of the class, all objects share the same copy.

This is the place where “this” pointer comes into action. The compiler passes an implicit pointer with the function name as “this”. This is called the “this” pointer.

The “this” pointer is passed as a hidden argument to all the member function calls. It is usually a local variable. Hence, “this” pointer is a constant pointer and its contents are the memory address of the current object.

Let us see the demonstration of “this” pointer below.

In the above program, we have a class called Sample, with two data members’ num and ch. We have a member function setParam that passes the parameters with the same names, num, and ch to set the values of the member variables.

In the main function, we first create an object of Sample class, obj and call a setParam function to set the values and then call the printValues function to print the values.

We have learned the basic building blocks of OOP in C++ in this tutorial. Understanding the classes and objects are the primary requirements, to begin with, OOP in C++. We have also learned about the constructors and destructors in detail with examples.

In our upcoming tutorial, we will learn about the initializer lists in C++.