In today’s scenario, VBScript has turned out to be a very important topic, especially for beginners who wish to learn the scripting language or automation tools like QTP/UFT.

We will be covering a series of VB Scripting tutorials to help the developers and testers to learn VBScript quickly in an easily understandable way.

In my subsequent tutorials, I will cover other important topics of VBScript like Variables, Constants, Operators, Arrays, Functions, Procedures, Excel Objects, Connections Objects, etc., which in turn will create an easy understanding among the users for learning VBScript Programming Language easily and effectively.

Initially, to start with I have chosen the first topic as ‘Introduction to VBScript’.

In this tutorial, I will discuss the basics of VBScript, thereby focusing more on its features, data types supported by it and coding methodologies along with the procedure to handle comments and formats in scripts.

Most of us would have used Visual Basic during our course curriculum in our school or college. Visual Basic is an event-driven programming language and an Integrated Development Environment from Microsoft.

VBScript language is used in QTP for coding and running Automated Test Scripts. This is not a very difficult language to learn and with a little knowledge of basic programming skills and passion for writing code, anyone can learn this easily. For those who know Visual Basic, it is an added advantage.

Automation Testers, who want to create, maintain and execute the tests in QTP need to have basic programming skills using VBScript.

Now let’s move on to some basics topics that are revolving around VBScript to enable clear understanding and knowledge about VBScript.

1) There is only one data type: Variant. It can store different kinds of information based on the context in which it is used.
2) If used in a numeric context it is a number or a string if used in a string expression.
3) If a number has to behave as a string we could enclose it within “ “.
4) There are various subtypes to a variant. You can explicitly specify these subtypes to achieve a clear definition for your data. The below is a screenshot from the VB User guide that shows all the subtypes of data that can be used:
(click on image to enlarge) 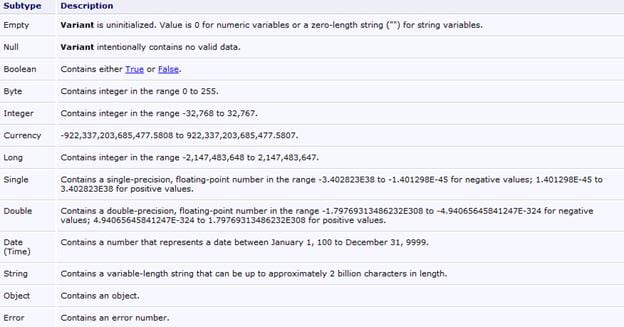 5) Conversion functions can be used to convert one subtype of data into another.
6) Since it is the only data type available, all the return values from a function are variants.

Here are different VBScripting examples you can try on your own.

1) A variable is nothing but a space in the computer’s memory that can store certain information. This information is bound to change from time to time. Where the information goes physically is immaterial but when needed, it can be accessed or changed by addressing the name of the variable.

E.g: If there is a statement that you want to run several times, you could use a variable to contain that count. Say X. X is a variable that can be used to store, change and use the space in the memory where we want to keep the count.

2) All variables are of the datatype Variant.

3) Declaring a variable before its use is optional, although it’s a good practice to do so.

4) To make the declaration mandatory there is an “Option Explicit” Statement available. To declare variables:

To make declarations mandatory this is how the code has to be written:
Option Explicit
Dim x, stri

If Option explicit statement was not used, we could have directly written:
x=100
stri=”Swati”
and it would not have thrown an error.

5) Naming convention: Names must start with an alphabetic character, must be unique, cannot contain an embedded period and cannot exceed 255 chars.

6) A variable containing a single value is a scalar variable and the one that has more than one is an array.

7) A one dimensional Array can be declared as Dim A(10). All the arrays in VB Script are zero-based that means the array index starts from 0 through the number declared. That means, our array A has 11 elements. Starting from 0 to 10.

8) To declare a 2-dimensional array simply separate the row count and column count by a comma. Eg: Dim A(5, 3). This means it has 6 rows and 4 columns. The first number is always row and the second a comma.

9) There is also a dynamic array whose size can change during runtime.  These arrays can be declared using dim or redim statements.

If an array is declared as Dim A(10) and during runtime, if we need more space we can do the same by using the statement: redim A(10). There is a “Preserve” statement that can be used in conjunction with the redim statement.

This piece of code shows how we do it. Initially, A is a 11 by 11 array. Then we are resizing it to be an 11 by 21 array and the preserve statement will make sure that the data that is previously contained in the array is not lost.

Some of the important operators that are most commonly used are:

It is important to note that the list is not complete but merely a subset containing the most commonly used operators.

The operator precedence rules are:

Primarily, there are 3 Environments where VBScript can be run.

Unlike other languages, VBScript has only 1 data type called Variant.

A Variant data type can contain several subtypes. Now, let’s take a look at what all values/data will be returned if a particular subtype is used.

#1) Empty: This subtype indicates that the value will be 0 in case of Numeric Variables and “” for String Variables.

#2) Null: This subtype indicates that there is no valid data.

#3) Boolean: This subtype indicates that the resultant value will be either true or false.

#4) Byte: This subtype exhibits that the resultant value will lie in the range between 0 to 255 i.e. the result will be from any value ranging from 0 to 255.

#11) String: This subtype will return a variable-length string value which can approximately be up to 2 billion characters in length.

#12) Object: This subtype will return an object.

#13) Error: This subtype will return an error number.

How to Create a Simple VBScript?

To create a VBScript, there are only 2 things required.

Now, let’s see a few VBScript Code for clarity purpose but before that, it is important to know where can the Scripts be inserted in an HTML Page.

Where to Insert Scripts in an HTML Page?

VBScript provides you the liberty to place a code in any of the following sections:

Now, let’s take a simple example to understand how VBScript code can be written inside HTML tags.

Note: Whatever is put inside the brackets of ‘document.write’, will be displayed as an output on the display page.

The Output of this program is: resultant from the above equation is 3

After completing the code, you can save this in a file and give a file name as anyfilename.html.

To run, just open this file in IE.

We have just seen the implementation of VBScript code in the HTML file. However, VBScript in QTP is not placed inside the HTML tags. It is saved with an extension ‘.vbs’ and is executed by the QTP Execution Engine.

To understand the practical implementation of VBScript in terms of QTP, you must know variables, constants, etc. and I will cover that in my upcoming tutorials and for time being, I just want to show you the VBScript code with the concept of an external file.

To access this code from an external source, save this code in a text file with an extension “.vbs”.

How Comments are Handled in VBScript

It is considered to be a good programming practice to include comments in the Scripts for better readability and understanding purposes.

There are 2 ways in which Comments can be handled in a VBScript:

#1) Any Statement that starts with a Single Quote (‘) is treated as a comment:

#2) Any Statements that start with the keyword REM are treated as Comments. 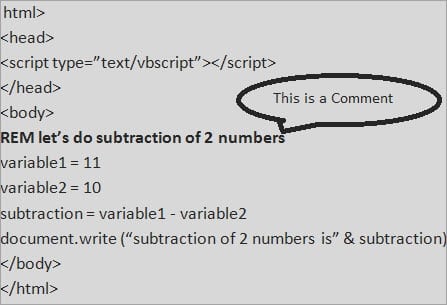 #1) No Semicolon is required to end the particular statement in VBScript.

#2) If 2 or more lines are written in the same line in VBScript then Colons (:) act as a line separator.

Let’s understand this with the help of an Example:

#3) If a statement is lengthy and required to break into multiple statements then you can use underscore “_”. 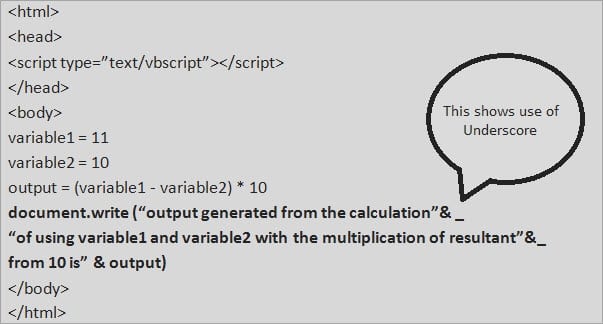 In any language, there are a set of words which work as Reserved Words and they cannot be used as Variable names, Constant names or any other Identifier names.

Following is the list of Reserved Keywords in VBScript:

That’s it! This is all about the basic concepts that are involved in VBScript.

I hope that this VBScript tutorial would have a given you a brief overview and clear understanding of this scripting language with easy examples.

About the author: Thanks to STH Team member Varsha for helping us to compile this series. She is in the Software Testing field with core VBScripting skills and received many internal excellence awards.

NEXT Tutorial #2 => In my upcoming VBS tutorial, I will cover about Variables in VBScript.

Stay tuned for much more updates, and feel free to share your thoughts about this tutorial.