Performance Testing also knows as ‘Perf Testing’, is a type of testing performed to check how application or software performs under workload in terms of responsiveness and stability. The Performance Test goal is to identify and remove performance bottlenecks from an application.

This test is mainly performed to check whether the software meets the expected requirements for application speed, scalability, and stability.

In this tutorial series, we will cover complete details like – Perf Testing Types, Process, and Writing Performance Test Strategy document from scratch.

This is a detailed tutorial series you may want to bookmark! 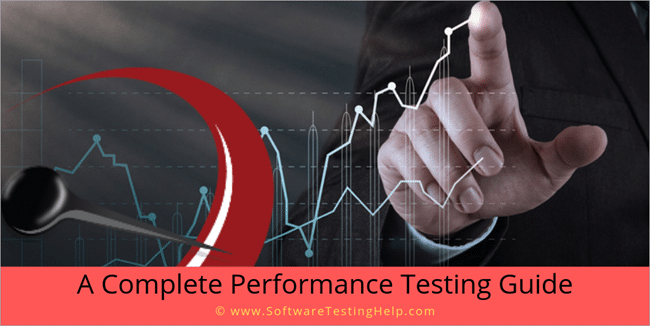 List of ALL the Performance Testing Tutorials in this Series: 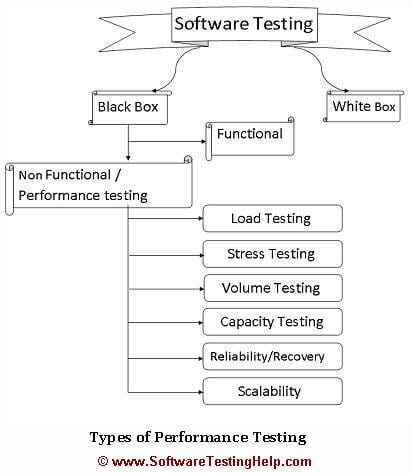 Load Testing is a type of performance test where the application is tested for its performance on normal and peak usage. The performance of an application is checked with respect to its response to the user request and its ability to respond consistently within an accepted tolerance on different user loads.

The key considerations are:

Stress Testing is used to find ways to break the system. The test also provides the range of maximum load the system can hold.

Generally, Stress Testing has an incremental approach where the load is increased gradually. The test is started with a load for which the application has already been tested. Then, more load is added slowly to stress the system. The point at which we start seeing servers not responding to the requests is considered the breaking point.

The following questions are to be addressed:

Generally, with the application usage, the database size grows, and it is necessary to test the application against a heavy database.  A good example of this could be a website of a new school or a college having small amounts of data to store initially, but after 5-10 years, the data stores in the database of the website is much more.

=> Is the application capable of meeting business volume under both normal and peak load conditions?

Capacity Testing is used to determine how many users and/or transactions a given web application will support and still meet performance. During this testing, resources such as processor capacity, network bandwidth, memory usage, disk capacity, etc. are considered and altered to meet the goal.

Online Banking is a perfect example of where capacity testing could play a major role.

Reliability Testing or Recovery Testing – is to verify whether or not the application is able to return back to its normal state after a failure or abnormal behavior and how long does it take for it to do so (in other words, time estimation).

If an online trading site experiences a failure where the users are not able to buy/sell shares at a certain point of the day (peak hours) but are able to do so after an hour or two, we can say the application is reliable or recovered from the abnormal behavior.

Here are all the activities performed in this testing: 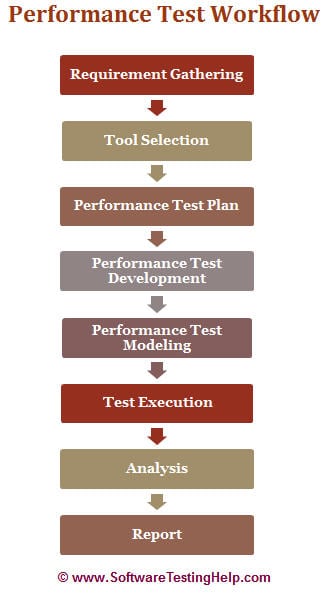 The performance team interacts with the client for identification and gathering of requirements – technical and business. This includes getting information on the application’s architecture, technologies, and database used, intended users, functionality, application usage, test requirement, hardware & software requirements, etc.

Once the key functionality is identified, POC (Proof Of Concept – which is a sort of demonstration of the real-time activity but in a limited sense) is done with the available tools.

The list of available tools depends on the cost of the tool, protocol that application is using, the technologies used to build the application, the number of users we are simulating for the test, etc. During POC, scripts are created for the identified key functionality and executed with 10-15 virtual users.

Depending on the information collected in the preceding stages, test planning and designing are conducted.

More on the Test Strategy document below.

Performance Load Model is created for the test execution. The main aim of this step is to validate whether the given Performance metrics (provided by clients) are achieved during the test or not. There are different approaches to create a Load model. “Little’s Law” is used in most cases.

The scenario is designed according to the Load Model in Controller or Performance Center but the initial tests are not executed with maximum users that are in the Load model.

Test Execution is done incrementally. For Example, If the maximum number of users is 100, the scenarios are first run with 10, 25, 50 users and so on, eventually moving on to 100 users.

Test results are the most important deliverable for the performance tester. This is where we can prove the ROI (Return on Investment) and productivity that a performance testing effort can provide.

Some of the best practices that help the Result Analysis process:

Test results should be simplified so the conclusion is clearer and should not need any derivation. Development Team needs more information on analysis, comparison of results, and details of how the results were obtained.

The test report is considered to be good if it is brief, descriptive and to the point.

This tutorial will explain how to write a sample Performance Test Strategy for a Messaging Application.

Remember, that this is just an example and the requirements will differ from one client to another, we will also get to know the best practices for Performance Testing in this tutorial. 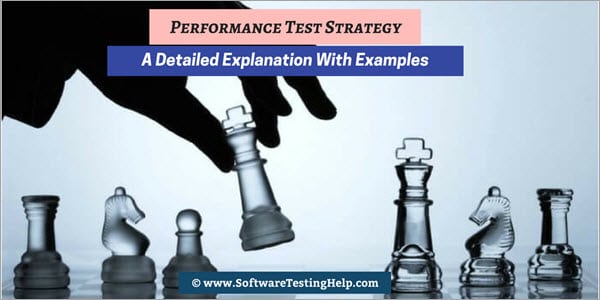 About ABC chat Application – Let’s assume that this is a chat workbench that is used in a company by their customer support agent, this chat application uses XMPP protocol i.e, Extensible Messaging and Presence Protocol and Open fire server for sending and receiving Instant messages.

Some enhancements have been made to this existing chat client like Remote PC control, PC diagnosis, Repair tools, Online chat, etc., so this performance Test strategy is a sample of such applications.

For this application let’s assume that the project team has decided to use JMeter for Performance Testing and JIRA for defect tracking.

The first page of the Performance Test Strategy document should contain Title of the Document and the Copyrights of the Company.

The third page should contain the Table of contents, followed by the below topics.

The purpose of this document is to define/explain how Performance Testing will be performed on the ABC chat application for the current and future state.

The key objectives of Performance Testing are as follows: 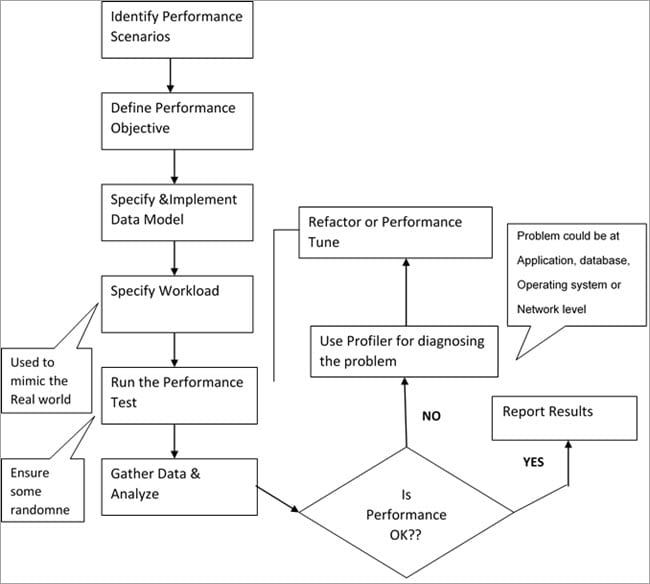 You need to incorporate the architecture diagram of your project in this session.

Below is the Performance Testing scope for ABC chat workbench:

Performance testing for ABC chat will be conducted using Jmeter by writing custom XMPP plugins that use a smack library for XMPP connections. These libraries are used to set up connections, login and send chat messages to the XMPP server.

These libraries are bundled into a jar file that is deployed into the Jmeter and is designed based on the scenarios to be tested. The Jmeter Work Bench is installed in the local machine which connects to the JMeter server which has the Load Generators to generate the required load on the Chat server system to monitor the system behavior.

The test scenario will be scripted using the JMeter tool. The scripts would be customized as required. The schedule will be created with the required ramp-up to simulate the real-world scenarios.

The Test Scenario would be broken up and measured in the below aspects:

a) Baseline Test: To run each scenario with 1 Vuser and multiple iterations in order to identify whether the application performance meets the business Service Level Agreement or not.

b) Base Load Test: To meet the Business Benchmark under load test, the Performance Testing team will perform a baseload test which will help to identify any system performance issues with increasing load and creates the baseline for the next level of performance testing.

c) Peak Load / Scalability Test: Performance Testing team will perform multiple tests with increasing Vusers to meet the expected load and also to measure the application performance to establish the performance curve and identify whether the deployment can support the service level agreements under the peak user load.

It helps in tuning or capacity planning of the individual Java virtual machines (JVM), the total number of required JVMs, and the processors. This will be achieved by increasing the no of Vusers to 50%, 75%, 100% and 125% of peak capacity.

System resources like CPU, Memory, and IO need to be monitored with the help of the project team.

The Performance test environment is assumed to be a replica of the production environment. The tests will be run with an incremental load to identify where the application fails.

Include the excel with the set of scenarios.

Scenario 1: To validate the Agent and customer chat for X no. of concurrent sessions.

The table given below explains the various types of Performance Tests along with their objectives. 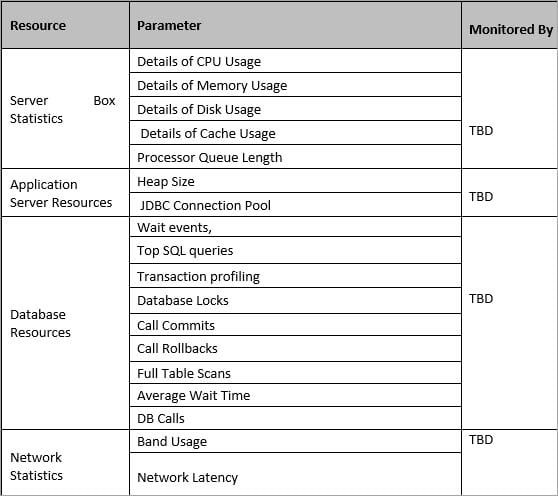 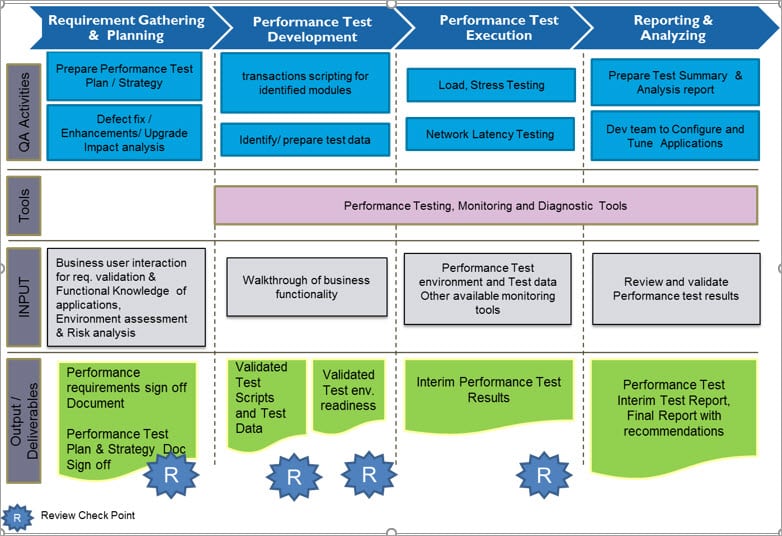 It is being assumed that the Performance environment data will be a copy of the production data and the required test data will be provided by the project team.

The definitions of severity codes are as follows:

Given below are the Critical Suspension and Resumption criteria which will impact the testing activities:

The Performance Test Deliverables include:

Roles & Responsibilities are clearly explained in the table given below.

By now you must have clearly understood how to write an effective Performance Test Strategy for a Messaging application.

In order to complete a Performance Test project successfully, we need to ensure that we are doing it in the right way from the planning stage ie planning, development, execution and analysis.

Let’s take a look at each stage in detail in order to conduct Performance Testing effectively.

I’m sure that this tutorial would have given you immense knowledge on Performance tests and how to write a Performance Test Strategy Document with detailed examples.

In our upcoming tutorial, we will learn the differences between Performance, Load and Stress Testing in detail.

73 thoughts on “A Complete Performance Testing Guide With Examples”