An In-Depth Look At Insertion Sort With Classic Examples.

Insertion sort is a sorting technique which can be viewed in a way which we play cards at hand. The way we insert any card in a deck or remove it, insertion sorts works in a similar way. 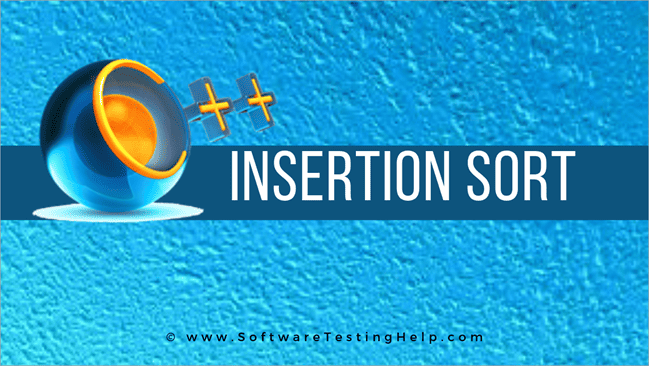 In the insertion sort technique, we start from the second element and compare it with the first element and put it in a proper place. Then we perform this process for the subsequent elements.

We compare each element with all its previous elements and put or insert the element in its proper position. Insertion sort technique is more feasible for arrays with a smaller number of elements. It is also useful for sorting linked lists.

Let us explore all about Insertion sort in this tutorial.

The pseudo code for insertion sort is given below.

Given above is the pseudo code for Insertion sort, next, we will illustrate this technique in the following example.

The array to be sorted is as follows:

Now for each pass, we compare the current element to all its previous elements. So in the first pass, we start with the second element. 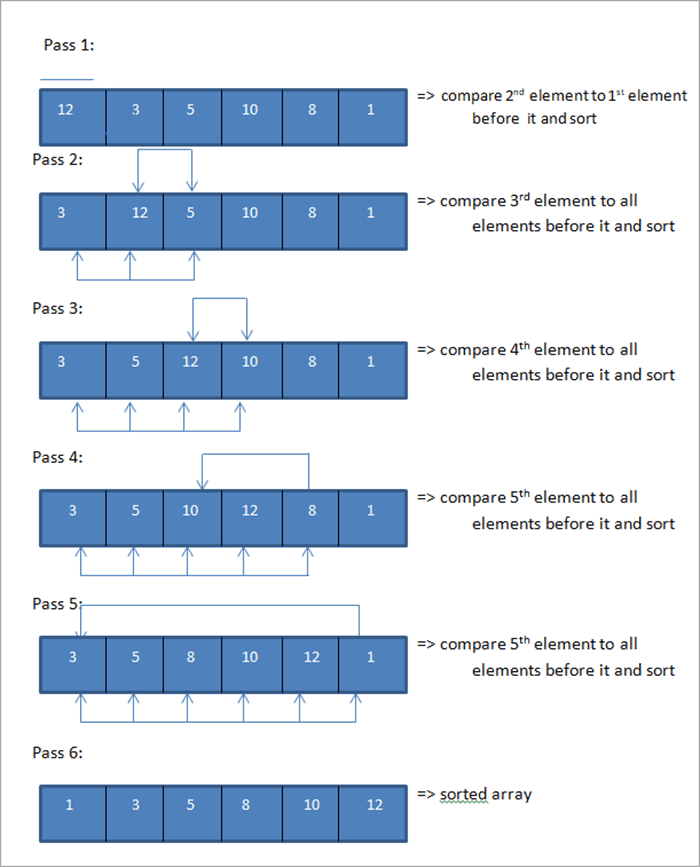 The above illustration can be summarized in a tabular form:

Next, we will demonstrate the Insertion sort technique implementation in C++ language.

Next, we will see the Java implementation of the Insertion sort technique.

Insertion sort works the best and can be completed in fewer passes if the array is partially sorted. But as the list grows bigger, its performance decreases. Another advantage of Insertion sort is that it is a Stable sort which means it maintains the order of equal elements in the list.

From the pseudo code and the illustration above, insertion sort is the efficient algorithm when compared to bubble sort or selection sort. Instead of using for loop and present conditions, it uses a while loop that does not perform any more extra steps when the array is sorted.

However, even if we pass the sorted array to the Insertion sort technique, it will still execute the outer for loop thereby requiring n number of steps to sort an already sorted array. This makes the best time complexity of insertion sort a linear function of N where N is the number of elements in the array.

Thus the various complexities for Insertion sort technique are given below:

In spite of these complexities, we can still conclude that Insertion sort is the most efficient algorithm when compared with the other sorting techniques like Bubble sort and Selection sort.

Insertion sort is the most efficient of all the three techniques discussed so far. Here, we assume that the first element is sorted and then repeatedly compare every element to all its previous elements and then place the current element in its correct position in the array.

In this tutorial, while discussing Insertion sort we have noticed that we compare the elements using an increment of 1 and also they are contiguous. This feature results in requiring more passes to get the sorted list.

In our upcoming tutorial, we will discuss “Shell sort” which is an improvement over the Selection sort.

In shell sort, we introduce a variable known as “increment” or a “gap” using which we divide the list into sublists containing non-contiguous elements that “gap” apart. Shell sort requires fewer passes when compared to Insertion sort and is also faster.

In our future tutorials, we will learn about two sorting techniques, “Quicksort” and “Mergesort” which use “Divide and conquer” strategy for sorting data lists.