A Complete List of the Best Selenium Tutorials to Learn and Master Selenium From Scratch:

After several frequent requests from STH readers, today we are finally launching our FREE Selenium Tutorial series. In this Selenium training series, we will cover all Selenium testing concepts and its packages in detail with easy to understand practical examples.

These Selenium tutorials are helpful for beginners to advanced level Selenium users. Starting from the very basic Selenium concepts tutorial, we will gradually move on to the advanced topics like Framework creation, Selenium Grid, and Cucumber BDD. 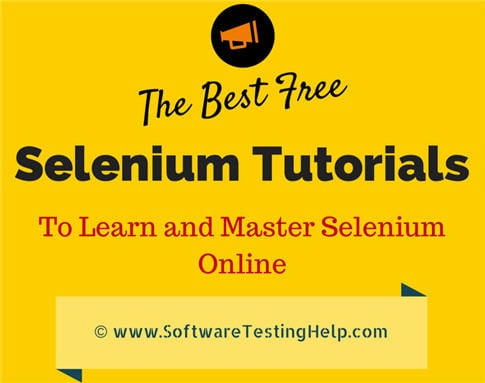 A Complete List of The Selenium Tutorials in This Series:

How to start Learning Selenium?

This is the best time to start learning Selenium testing on your own with the help of this free Selenium Training series. Read tutorials, practice examples at your home, and put your queries in the comment section of the respective tutorials. We will address all of these queries.

This is our genuine effort to help you learn and master one of the most popular software testing tools!

We are much delighted to launch our yet another series of software testing training tutorials. The belief behind introducing this tutorial is to make you an expert in one of the widely used software test automation solution, Selenium.

In this series, we will look at the various facets of Selenium. Selenium is not just a tool, it is a cluster of independent tools. We will look into some of the Selenium tools in detail with practical examples wherever applicable.

Before you jump into reading this exciting and useful series, let us take a look at what it has got in store for you.

The current industry trends have shown that there is a mass movement towards automation testing. Hence a cluster of repetitive manual testing scenarios has raised a demand to bring in the practice of automating these manual scenarios.

There are several Benefits of implementing Automation Test; let’s take a look at them:

All of these benefits result in the following:

There are several Automation testing benefits which are well understood and largely talked about in the software testing industry.

One of the best answers to all the above questions for automating web-based applications is Selenium. Because:

Selenium is one of the most popular Automated Testing suites. Selenium is designed in such a way to support and encourage Automation Testing of functional aspects of web-based applications and a wide range of browsers and platforms. Due to its existence in the open-source community, it has become one of the most accepted tools amongst the testing professionals.

Selenium supports a broad range of browsers, technologies, and platforms. 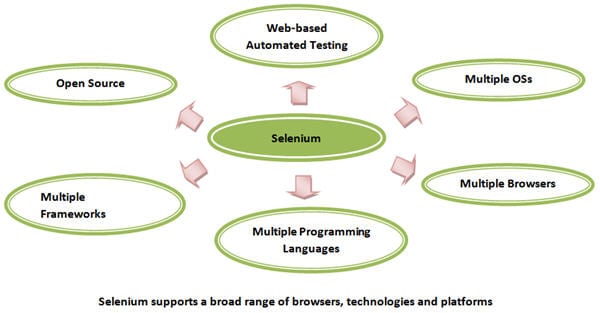 Selenium is not just a single tool or a utility, its rather a package of several testing tools, hence it is referred to as a Suite. Each of these tools is designed to cater to different testing and test environment requirements.

The suite package constitutes of the following set of tools: 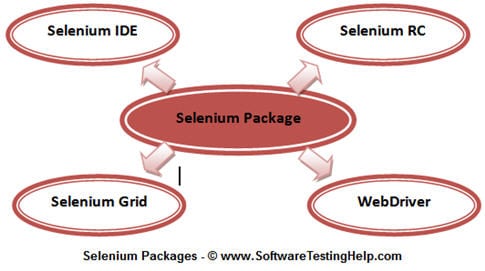 Selenium is a result of the continuous efforts by an engineer named Jason Huggins from ThoughtWorks. Being responsible for the testing of an internal Time and Expenses application, he realized the need for an automation testing tool in order to get rid of repetitive manual tasks without compromising quality and accuracy.

As a result, he built a JavaScript program, named as “JavaScriptTestRunner” in early 2004 that could automatically control the browser’s actions which seemed very much similar to that of a user communicating with the browser.

Henceforth, Jason started demoing the tool to a vast audience. Eventually, the discussions were laid out to categorize this tool in an open-source category and its potential to grow as a re-usable testing framework for other web-based applications.

The tool was later acclaimed with the name “Selenium Core”.

Selenium IDE was developed by Shinya Kasatani. While studying Selenium Core, he realized that this JavaScript code can be extended to create an integrated development environment (IDE), which can be plugged into Mozilla Firefox. This IDE was capable of recording and playing back the user actions on a Firefox instance to which it was plugged-in. Later on, Selenium IDE became a part of Selenium Package in the year 2006. Later this tool turned out the great value and potential to the community.

Selenium IDE is the simplest and easiest of all the tools within the Selenium Package. Its record and playback features make it exceptionally easy to learn with minimal acquaintances to any programming language. With several advantages, a few disadvantages accompanied Selenium IDE, thus making it inappropriate to be used in case of more advanced test scripts.

Advantages and Disadvantages of Selenium IDE: 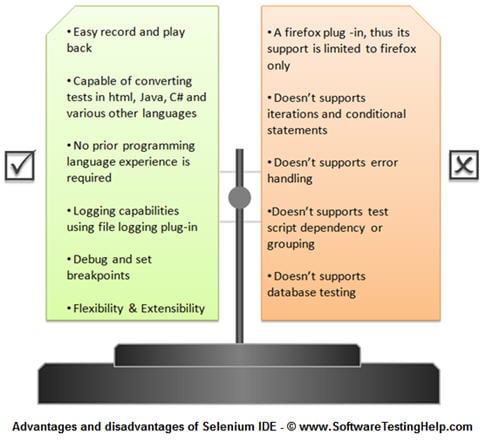 Selenium RC is a tool written in Java to allow a user to construct test scripts for a web-based application in any programming language he/she chooses. Selenium RC came as a result to overcome the various disadvantages incurred by Selenium IDE or Core.

Loopholes and restrictions which were imposed while using Selenium Core made it difficult for the user to leverage the benefits of the tool to its totality. Thus it made the testing process a cumbersome and a far-reaching task.

One of the crucial restrictions was the Same Origin Policy.

The problem with Same Origin Policy is, it disallows to access the DOM of a document from an origin that is different from the origin we are trying to access the document.

Thus Selenium Core (JavaScript Program) cannot access the elements from an origin that is different from where it was launched. 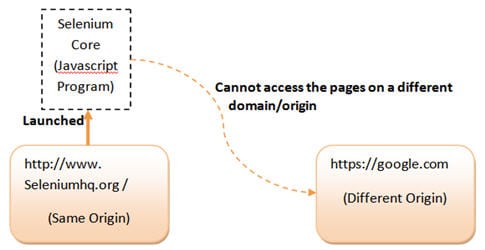 So, In order to govern the same-origin policy without the need of making a separate copy of Application under test on the Selenium Core, Selenium Remote Control was introduced. While Jason Huggins was demoing Selenium, another fellow colleague at ThoughtWorks named Paul Hammant suggested a workaround of the same-origin policy and a tool that can be wired up with a programming language of our choice. Thus Selenium RC came into existence.

Unlike Selenium IDE, Selenium RC supports a wide range of browsers and platforms.

There are a few pre-requisites to be in place before creating Selenium RC scripts:

Advantages and Disadvantages of Selenium RC:

Please refer the following figure to more about the advantages and disadvantages of Selenium RC. 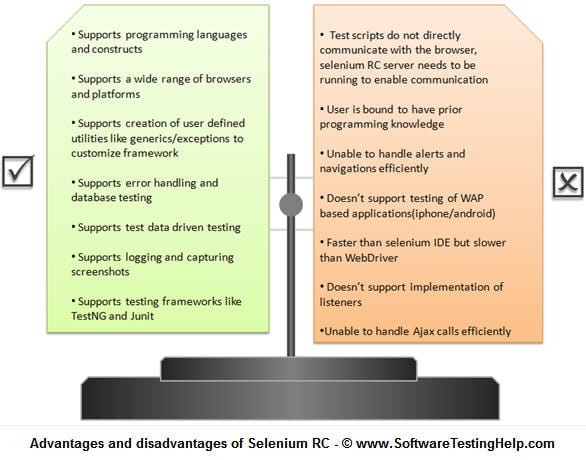 With selenium RC, the life of a tester has always been positive and favorable until the emerging trends raised a demand to execute the same or different test scripts on multiple platforms and browsers concurrently so as to achieve distributed test execution, testing under different environments and saving execution time remarkably. Thus, catering these requirements Selenium Grid was brought into the picture.

Selenium Grid was introduced by Pat Lightbody in order to address the need for executing the test suites on multiple platforms simultaneously.

Selenium WebDriver was created by yet another engineer at ThoughtWorks named Simon Stewart in the year 2006. WebDriver is also a web-based testing tool with a subtle difference with Selenium RC. Since the tool was built on the fundamental where an isolated client was created for each of the web browsers; no JavaScript Heavy lifting was required. This led to a compatibility analysis between Selenium RC and WebDriver. As a result of which a more powerful automated testing tool was developed called Selenium 2.

WebDriver is clean and purely an object-oriented framework. It utilizes the browser’s native compatibility to automation without using any peripheral entity. With the increasing demand, it has gained a large popularity and user-base.

Advantages and Disadvantages of Selenium WebDriver:

Refer the following figure for more information about the advantages and disadvantages of WebDriver. 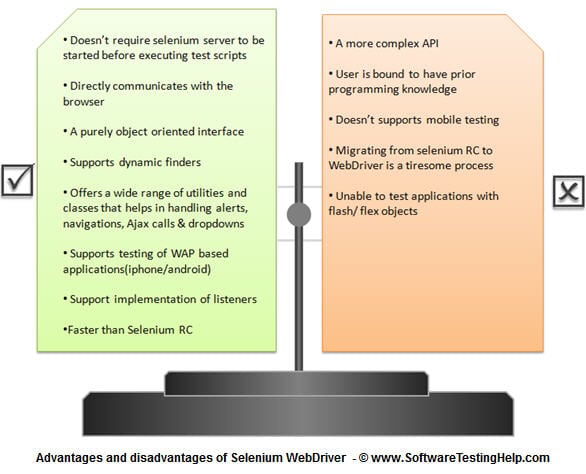 Selenium 3 is an advanced version of Selenium 2. It is a tool which is focused on automation of mobile and web applications. Stating that it supports mobile testing, we mean to say that the WebDriver API has been extended to address the needs of mobile application testing. The tool is expected to be launched soon in the market.

In this tutorial, we tried to make you acquainted with the Selenium suite describing its various components, usages, and their advantages over each other.

In the next tutorial, we would be discussing the basics of Selenium IDE, its installation, and the features. We would also have a look at the basic terminologies and nomenclatures of Selenium IDE.

Next Selenium Tutorial: Introduction to Selenium IDE and its installation with a detailed study on all the features of Selenium IDE (coming soon)

A remark for the readers: Our next tutorial of the Selenium training series is in the processing mode, meanwhile you can explore a bit about the Selenium suite and its tools by looking at its official website.

About the authors:
Shruti Shrivastava (our main author for this series), Amaresh Dhal, and Pallavi Sharma are helping us to bring this series to our readers.

Stay tuned and share your views, comments, and knowledge. Also, let us know if you think that we missed out something so that we can include them in our subsequent tutorials.