What is White Box Testing?

If we go by the definition, “White box testing” (also known as clear, glass box or structural testing) is a testing technique which evaluates the code and the internal structure of a program.

White box testing involves looking at the structure of the code. When you know the internal structure of a product, tests can be conducted to ensure that the internal operations performed according to the specification. And all internal components have been adequately exercised. 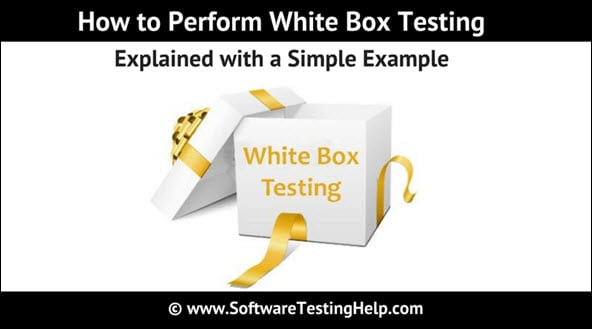 It’s almost a decade now since I’m into Software testing field and so far noticed that the testers are the most enthusiastic in the whole software industry.

The prime reason behind this is – tester always has something in their scope to learn. Be it a domain, process or a technology, a tester can have a complete development if they wish to.

But as they say “There is always a darker side”.

Testers also indeed avoid a type of testing which they feel to be very complicated and the developer’s piece of cake. Yes, the “White Box Testing”.

White Box Testing is coverage of the specification in the code:

2. Segment coverage: Ensure that each code statement is executed once.

3. Branch Coverage or Node Testing: Coverage of each code branch in from all possible was.

4. Compound Condition Coverage: For multiple conditions test each condition with multiple paths and combination of the different path to reach that condition.

5. Basis Path Testing: Each independent path in the code is taken for testing.

6. Data Flow Testing (DFT): In this approach you track the specific variables through each possible calculation, thus defining the set of intermediate paths through the code.DFT tends to reflect dependencies but it is mainly through sequences of data manipulation. In short, each data variable is tracked and its use is verified. This approach tends to uncover bugs like variables used but not initialize, or declared but not used, and so on.

7. Path Testing: Path testing is where all possible paths through the code are defined and covered. It’s a time-consuming task.

8. Loop Testing: These strategies relate to testing single loops, concatenated loops, and nested loops. Independent and dependent code loops and values are tested by this approach.

Why we perform WBT?

To discover the following types of bugs:

We need to write test cases that ensure the complete coverage of the program logic.

For this we need to know the program well i.e. We should know the specification and the code to be tested. Knowledge of programming languages and logic is required for this type of testing.

Not possible for testing each and every path of the loops in the program. This means exhaustive testing is impossible for large systems.

This does not mean that WBT is not effective. By selecting important logical paths and data structure for testing is practically possible and effective.

Difference Between White-Box and Black-Box Testing

Under Black box testing, we test the software from a user’s point of view, but in White box, we see and test the actual code.

In Black box testing, we perform testing without seeing the internal system code, but in WBT we do see and test the internal code.

White box testing technique is used by both the developers as well as testers. It helps them to understand which line of code is actually executed and which is not. This may indicate that there is either a missing logic or a typo, which eventually can lead to some negative consequences.

Step #1 – Understand the functionality of an application through its source code. Which means that a tester must be well versed with the programming language and the other tools as well techniques used to develop the software.

Step #2– Create the tests and execute them.

When we discuss the concept of testing, “coverage” is considered to be the most important factor. Here I will explain how to have maximum coverage from the context of White box testing.

There are several types and different methods for each white box testing type.

See the below image for your reference. 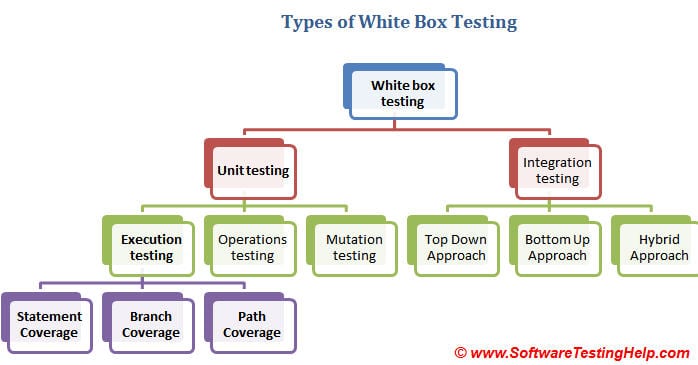 Today, we are going to focus mainly on the execution testing types of ‘Unit testing white box technique’.

Note that the statement, branch or path coverage does not identify any bug or defect that needs to be fixed. It only identifies those lines of code which are either never executed or remains untouched. Based on this further testing can be focused on.

Let’s understand these techniques one by one with a simple example.

In a programming language, a statement is nothing but the line of code or instruction for the computer to understand and act accordingly. A statement becomes an executable statement when it gets compiled and converted into the object code and performs the action when the program is in a running mode.

Hence “Statement Coverage”, as the name itself suggests, it is the method of validating whether each and every line of the code is executed at least once.

“Branch” in a programming language is like the “IF statements”. An IF statement has two branches: True and False.

So in Branch coverage (also called Decision coverage), we validate whether each branch is executed at least once.

In case of an “IF statement”, there will be two test conditions:

Hence, in theory, Branch Coverage is a testing method which is when executed ensures that each and every branch from each decision point is executed.

Let’s take a simple example to understand all these white box testing techniques.

Consider the below simple pseudocode:

For Statement Coverage – we would only need one test case to check all the lines of the code.

Because Statement coverage will only cover the true side, for the pseudo code, only one test case would NOT be sufficient to test it. As a tester, we have to consider the negative cases as well.

Hence for maximum coverage, we need to consider “Branch Coverage”, which will evaluate the “FALSE” conditions.

In the real world, you may add appropriate statements when the condition fails.

So now the pseudocode becomes:

Since Statement coverage is not sufficient to test the entire pseudo code, we would require Branch coverage to ensure maximum coverage.

So for Branch coverage, we would require two test cases to complete the testing of this pseudo code.

With this, we can see that each and every line of the code is executed at least once.

Here are the Conclusions that are derived so far:

As said earlier, Path coverage is used to test the complex code snippets, which basically involve loop statements or combination of loops and decision statements.

Now to ensure maximum coverage, we would require 4 test cases.

To simplify these let’s consider below flowchart of the pseudo code we have: 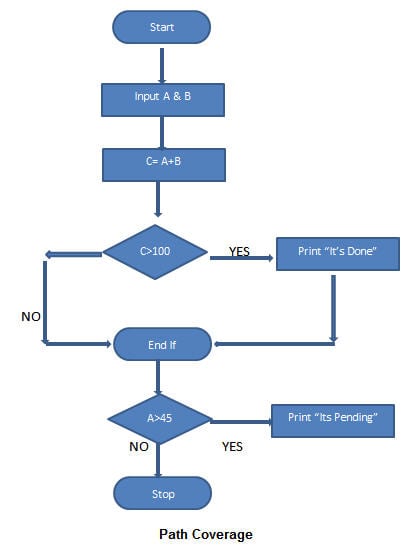 Further Reading => How To Make A Flowchart In MS Word

In order to have the full coverage, we would need following test cases:

So the path covered will be: 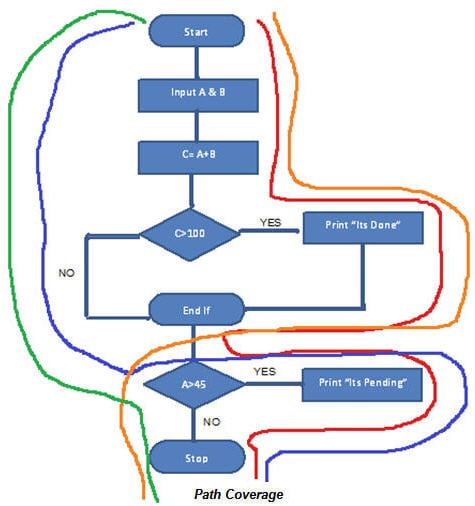 Given below is a list of top white box test tools.

Veracode’s white box testing tools will help you in identifying and resolving the software flaws quickly and easily at a reduced cost. It supports several application languages like .NET, C++, JAVA etc and also enables you to test the security of desktop, web as well as mobile applications. Still, there are several other benefits of Veracode tool. For detailed information about Veracode White box test tools, please check the below link.

EclEmma was initially designed for test runs and analysis within the Eclipse workbench. It is considered to be a free Java code coverage tool and has several features as well. To install or know more about EclEmma please check out the below link.

A framework which is used for testing C programs is known as RCUNIT. RCUNIT can be used accordingly based on the terms of the MIT License. It is free to use and in order to install or know more about it, please check the below link.

cfix is one of the unit testing frameworks for C/C++ which solely aims at making test suites development as simple and easy as possible. Meanwhile, cfix is typically specialized for NT Kernel mode and Win32. To install and know more about cfix, please check out the below link

Emma is an easy to use free JAVA code coverage tool. It includes several features and benefits. To Download and know more about Emma, please check the below link.

NUnit is an easy to use open source unit testing framework which does not require any manual intervention to judge the test results. It supports all .NET languages. It also supports data-driven tests and tests run parallel under NUnit. Earlier releases of NUnit used NUnit license but NUnit 3 is released under the MIT license. But both the licenses allow free use without any restrictions. In order to download and know more about NUnit please check the below link.

CppUnit is a unit testing framework written in C++ and is considered to be the port of JUnit. The test output for CppUnit may be either in the XML or text format. It creates unit tests with its own class and runs tests in the test suites. It is licensed under LGPL. In order to download and know more about CppUnit please check the below link.

JUnit is a quiet simple unit testing framework that supports test automation in Java Programming Language. It mainly supports in Test Driven Development and provides the Test coverage report as well. It is licensed under Eclipse Public License. For free download and in order to know more about JUnit please check the below link.

JsUnit is considered to be the port of JUnit to javascript. And it is an open source unit testing framework to support Client sided Javascript. It is licensed under GNU Public License 2.0, GNU Lesser Public License 2.1 and Mozilla Public License 1.1. In order to download and know more about JsUnit please check the below link.

Also, check all the tools that we have listed under Static code analysis here.

Feel free to suggest more simple or advanced tools that you are using for white box technique.

Relying only on black box testing is not sufficient for maximum test coverage. We need to have a combination of both black box and white box testing techniques to cover maximum defects.

If done properly, White box testing will certainly contribute to the software quality. It’s also good for testers to participate in this testing as it can provide the most “unbiased” opinion about the code. :)

Let us know if you have any questions about the methods we discussed in this article.