An Intensive Look At The Basics Of Strings In C++.

In this C++ series, until now, we have mostly discussed numeric arrays in C++. In this tutorial, we will discuss the manipulation with character arrays which we simply call “Strings”.

Character array is mostly a C-style string that C++ supports. In addition to C-style character arrays, C++ also supports a string class “std:: string”. Further, in this tutorial, we will discuss both the types of strings as well as the difference between them and about programming each type in C++. 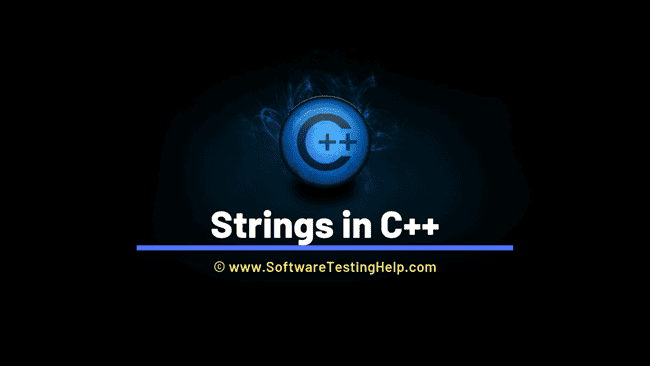 The c-style string is a character array terminated with a null character “\0”. Hence we can define an array of type char and the dimensions or size of the arrays and then we can initialize it to a string or array of characters.

Note that it’s the compiler that terminates a string with a null character, so if we initialize the character array with a string (in the double quote “”) then we need to leave extra space for the null character while declaring the size of an array.

Let’s take some Examples of declaring and initializing character arrays.

All the above definitions are valid C-style string definitions in C++. Note that we can either declare the actual size or we can leave the size blank so that the compiler can accommodate the size depending on the string that we initialized.

Given below is a simple program that reads the string using cin and outputs it using cout.

This is C-style string
you entered: This

If we compare both the output, we see that when we entered the first string “SoftwareTestingHelp.com”, it was printed as it is.

But in the second output, though we entered the string as “This is C-style string”, the output was only “This”.

The difference in output is because, ‘>>’ operator of cin that is used to read the string is treated as ‘scanf’ function of C, which reads only till the space encountered. Hence ‘cin with >>’ is suitable to read character arrays without space.

Hence while the second output space was encountered, the cin function took it as the end of the string and read only the first word.

In order to read an entire line of characters including the spaces, C++ uses the “get’ function.

An Example program using the get function is shown below:

As shown in the example, the get function of cin uses two arguments. The first argument is the character array variable in which the string is to be read while the second argument is the maximum size of the array.

C-style strings also support numerous string functions which allow the users to manipulate the strings. These functions are defined in the header “cstring”.

We present a table below which lists various string functions that can be used to manipulate C-style strings.

The following program shows the usage of some of these functions in C++:

String in C++ that is defined by the class “std::string” is a representation of the stream of characters into an object. In other words, String class is a collection of string objects. This string class is a part of the std namespace and is defined in the header “string.h”.

Let’s discuss some of the basic differences between string class and character array.

Here, the remaining 95 locations are wasted.

Contrary to this, string objects are dynamic in nature and will take up the exact space for the value.

These are some of the basic differences between the character array and string object class.

Next, we will see a few examples of string class along with some basic operations that are performed on objects of the string class.

An Example to declare and initialize the string class.

In the above example, we have declared and initialized a string object using the “string” class. This is a simple example. Now let’s have a program to read the string from the user and also demonstrate few string functions including find the length and compare two strings.

String entered is: SoftwareTestingHelp
Length of the string str is: 19
Two strings are equal

In the above illustration, we have used numerous string functions to manipulate the strings. After declaring the string we use “getline” function of the string class to read the string from the standard input.

Yet another function is to append another string to the end of the existing string. This is the “append” function. In this example, we append ‘.com’ to the already existing string str1 with value “softwaretesting”.

In this tutorial, we have covered the character array which is also called as C-style strings along with the basics of the string class. String class comes with more utilities like iterator class as it’s a container class.

We will see more about string class and its functions in our upcoming STL tutorials!!

=> Visit Here To See The C++ Training Series For All.