This C++ Assert Tutorial Sheds Light on Assertions in C++ which are Statements to Test the Assumptions in the Program Made by the Programmer:

In a C++ program, we usually make assumptions in a program like an array index should be greater than zero.

=> Visit Here For The Complete C++ Course From Experts. 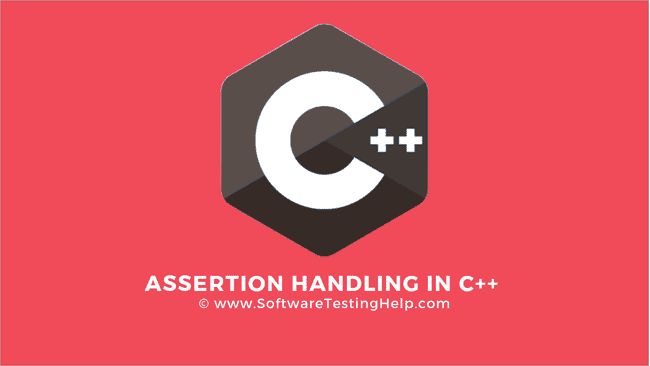 We can provide an assertion using an assert preprocessor macro.

With the integer myInt, we can declare an assertion saying myInt should be > 0 in the following way.

Suppose the value of myInt specified is -1, hence the assertion fails when the compiler encounters the above statement as myInt value is -1. Once assertion fails, a message stating invalid assertion is issued along with the program name and line number and the program is terminated.

A general prototype of assert is as follows:

Thus we get to know where the problem occurred as well as what is the problem that occurred in the code. Hence using assertions makes debugging more efficient.

In the above program, we have used an assert call that contains the expression (myInt!=NULL) in the display_number function. In the main function first, we pass a pointer variable second_ptr that contains the address of variable myptr. When this call is made, the assert is true. Hence program execution is normal and the value is displayed.

In the second call to display_number, we pass the null pointer thereby making assert false. Thus when the second call is made, as assertion failed message is displayed as shown in the output.

When we use assertions they are checked at runtime. Assertions make debugging efficient, but care should be taken on not to include assertions in the release build of the application. This is because we know that when we release an application, we do it only when we are sure that the application is tested thoroughly.

We can include a line given below in the program to disable all assert statements.

In this program, we have specified the #define NDEBUG statement but is commented. This means that the assert statement is active. Thus when the program is executed, the second call to assert returns false and an error message is flashed and the program is aborted.

Thus by uncommenting the line #define NDEBUG, we have disabled the assert statements in the program.

The assert that we have seen so far is executed at run time. C++ supports yet another form of assert known as the static_assert and it performs compile-time assertion checking. It is present since C++11.

A static_assert has the following general syntax.

Message => String that will appear as an error message if bool_constexpr is false.

The below program shows the usage of static_assert in a C++ program.

In the above program, we have provided static_assert with an expression and a message. When it fails, a compiler error is issued as shown in the output.

Answer: An assert in C++ is a predefined macro using which we can test certain assumptions that are set in the program. When the conditional expression in an assert statement is set to true, the program continues normally. But when the expression is false, an error message is issued and the program is terminated.

Static_assert has been incorporated in C++ from C++11 onwards. It takes the conditional expression and a message to be displayed as arguments. When the condition evaluates to false, a compiler error is issued and the message displayed. The program is then terminated.

Answer: Assert () macro is used to test the conditions or assumptions that should not occur in a program. For example, the array index should always be > 0. Another assumption can be 2+2 == 3+1.

So using assert () we can test such assumptions and as long as they evaluate to true, our program runs normally. When they are false, the program is terminated.

Apart from the assert () statement C++11 also supports static_assert () that is evaluated at compile time. When static_asset () evaluates to false, a compiler error is issued and the program gets terminated.

Assertions are a way to test the assumptions in the program and by evaluating the conditional expressions inside assertions, we can test the program thoroughly and debug becomes more efficient.