This series of tutorials would completely enrich your knowledge on Spock Framework.

Simple and clear examples have been included in each tutorial for your easy understanding of the concept.

Get Ready To Learn Spock For Free!! 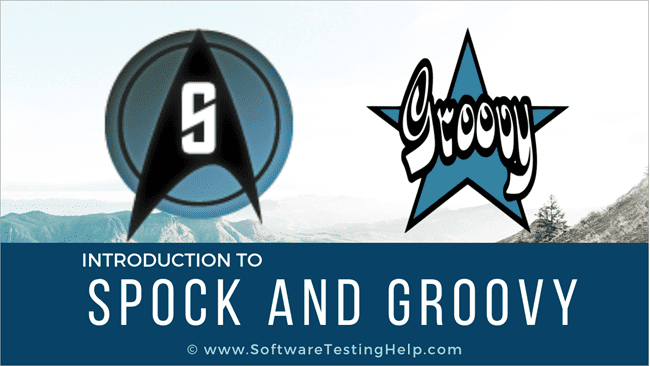 List of All the Spock Tutorials in this Series:

Learn Spock in detail with the help of this Intensive Spock Training series for beginners and experienced professionals.

Overview of Tutorials in Spock Series

Spock is a test framework that’s built on top of Groovy. It enforces BDD at the core and ensures if all tests written using the framework follow the BDD conventions.

Also, unlike JUnit, Spock has its own Mocking and test double libraries as well as full support for parameterized test scenarios.

It is due to this complete package in self, the Spock specifications are super readable and expressive and as a result of which they make the test to achieve more and more of what it was intended for reducing the cliché boilerplate code.

In spite of all these cool features, Spock tests are runnable using the existing JUnit test runner & the existing command line/build tools like Maven and Gradle, which make it even more compelling to use. In a nutshell, Spock combines all the good features of JUnit, BDD (frameworks like JBehave & Cucumber) as well as mocking.

We will take a look at a couple of examples illustrating each of these features in the further sections.

Groovy is a scripting language for Java platform.

Some of the main features of groovy include:

#1) It can be used as dynamically typed (where a variable can hold any type of data) as well as statically typed (which enforces strongly typed constructs on variables holding data).

Example: We have assigned array and map in the same way and internally groovy determines the type and handles it appropriately.

The output of the above code sample is:

#2) All valid Java code is a valid Groovy code too (but not the other way round as it has additional features as well).

#4) Unlike Java semicolons are optional in groovy and the primitive types are considered as objects by default.

As this tutorial series is more focused on Spock, we’ll just learn those Groovy features that are essential for authoring Spock based test specifications.

Getting Started with Spock

In order to get started, let’s see, what libraries are required depending on what build system you are using (ex. Gradle / maven).

For Maven based projects

Maven projects will need to include a plugin for compiling Gradle code as well as a surefire plugin in order to run groovy based specifications. In addition to this groovy & Spock, dependencies should also be added.

For Gradle based Projects

For a sample gradle file as below, the most important requirements include gradle plugin and the dependencies for groovy for code and test.

Anatomy of a Spock Specification

Spock tests can be written for any language that runs on JVM. This means that even if your application code is in Java or Scala or Kotlin etc., you can still choose to write your unit/integration tests in Spock (over others like JUnit, JBehave, etc.).

Each Spec file can contain multiple tests (similar to a JUnit test class file) and each test can optionally contain the BDD blocks i.e. given, when and then. This is similar to other BDD frameworks, where each of these sections can be correlated to Arrange, Act and Assert sections in the JUnit tests respectively.

Below is a block diagram depicting the hierarchy of Spec and tests. 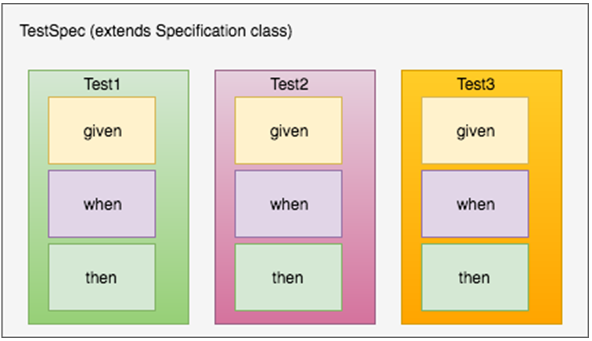 Let’s see how a sample specification looks in the code:

#1) Look at the name of the test scenarios (the string after the def keyword): “check case-insensitive equality of 2 strings”. These are plain English strings and this makes the test names quite readable and gives a real sense to test as to what it achieves.

Compare it to the usual JUnit test where the test name will look as something like c.

#2) Given, when and then blocks are equivalent to Arrange, Act and Assert. Out of these look at the then (or assert block) which implies equality assertion and avoids all boilerplate code associated with assertions.

Example, An assertion in JUnit would have looked as shown below:

As you can see from the above, the Spock tests make the tests look less verbose as well as avoid all boilerplate code in assertions (and setup, etc.)

For each of the individual blocks in a test, you can choose to provide block description as a string to provide more details about the block that’s getting executed. This is helpful for providing a more verbose structure to the test.

Let’s see an Example below:

#1) All the blocks in a Spock based spec are optional. However, if present “when” and “then” should appear together in sequence.

#2) If you just need to validate an assertion (and you don’t have a need of when block), you can use “expect” block. It can be used to assert pre-conditions even before when and then blocks (and can be used multiple times in a test).

Let’s see a sample usage of expect like validating the pre-condition before executing the “when” block.

As shown above, the expect block is trying to assert the class value of the input fields as well as the value of one of the inputs to lie within the range.

In this Spock tutorial, we have covered the basics of Groovy programming language, along with the anatomy or basic building blocks of a Spock Specification.

We created a sample project with the required dependencies in order to write groovy based Spock specifications and wrote a sample specification.

In the other tutorials in this series, we will delve deeper into the features provided by the Spock framework and get to know how they make use of groovy language to create clean, and readable test specifications.

Stay tuned to our upcoming Spock tutorials to know more about Test fixtures, Assertions and Reporting in Spock.