Role Of Polymorphism In C++ With Examples.

Polymorphism is one of the four pillars of object-oriented programming. Polymorphism means having many forms. It can be defined as the technique by which an object can take many forms depending on the situation.

In programming terms, we can say that an object can behave differently in different conditions. 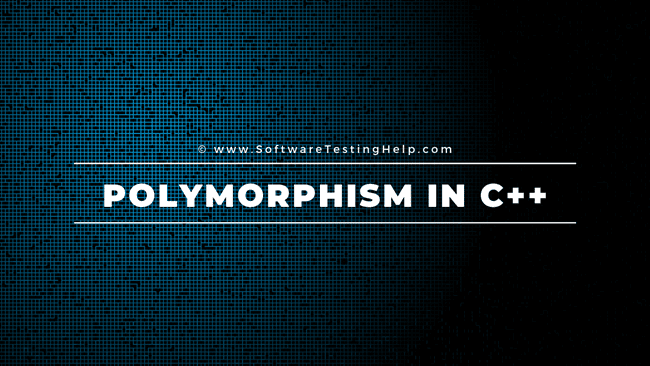 For Example, a woman can take many roles in different situations. To a child, she is a mother, a homemaker at home, a worker in the office, etc. So a woman assumes different roles and exhibits different behavior in different conditions. This is a real-life example of polymorphism.

Similarly in programming world also, we can have an operator “+” that is the binary addition operator which behaves differently when the operands change. For Example, when both the operands are numeric, it performs addition.

On the other hand, when the operands are string, it acts as concatenation operator. Thus polymorphism, in a nutshell, means an entity taking up many forms or behaving differently under different conditions.

Polymorphism is divided into two types.

The diagram to represent this is shown below: 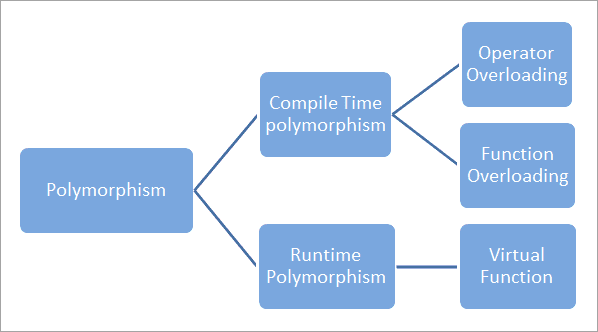 Runtime polymorphism is also known as dynamic or late binding or dynamic polymorphism. We will look into the detailed implementation of each of these techniques in our following topics.

Let us see the main differences between compile time and runtime polymorphism below.

Compile time polymorphism is a technique in which an object’s method is invoked at the compile time.

This type of Polymorphism is implemented in two ways.

We will discuss each technique in detail.

A function is said to be overloaded when we have more than one function with the same name but different parameter types or a different number of arguments.

Note that two functions having the same name and same parameter list but different return type is not an overloaded function and will result in a compilation error if used in the program.

Similarly, when function parameters differ only in pointer and if array type is equivalent, then it should not be used for overloading.

Other types like static and non-static, const and volatile, etc. Or parameter declarations that differ in presence or absence of default values are also not to be used for overloading as they are equivalent from the implementation point of view.

For Example, the following function prototypes are overloaded functions.

In the main function, we make four function calls that provide various parameters. The first two function calls are straightforward. In the third function call to Add, we provide two floating point values as arguments.

The main benefit of function overloading is that it promotes code reusability. We can have as many functions as possible with the same name as long as they are overloaded based on the argument type, argument sequence and the number of arguments.

By doing this it becomes easier to have different functions with the same name to represent the behavior of the same operation in different conditions.

If function overloading was not present, then we would have had to write too many different kinds of functions with different names, thus rendering the code unreadable and difficult to adapt.

Operator overloading is the technique using which we give a different meaning to the existing operators in C++. In other words, we overload the operators to give a special meaning to the user-defined data types as objects.

Most of the operators in C++ are overloaded or given special meaning so that they can work on user-defined data types. Note that while overloading, the basic operation of operators is not altered. Overloading just gives the operator an additional meaning by keeping their basic semantic same.

These operators are listed in the table below.

The functions that we use to overload operators are called “Operator functions”.

The general syntax of the operator function is:

Here we have overloaded the unary increment operator using operator ++ function. In the main function, we use this ++ operator to increment the object of class Distance.

Here we have used the classic example of the addition of two complex numbers using the operator overloading. We define a class to represent Complex numbers and an operator function to overload + operator in which we add the real and imaginary parts of complex numbers.

In the main function, we declare two complex objects and add them using the overloaded + operator to get the desired result.

In the below example, we will use friend function to add two complex numbers to see the difference in implementation.

We see the output of the program is the same. The only difference in the implementation is the use of friend function to overload the + operator instead of a member function in the previous implementation.

In the main function, when we assign the df object to a res_val variable, the conversion takes place and the result is stored in res_val. 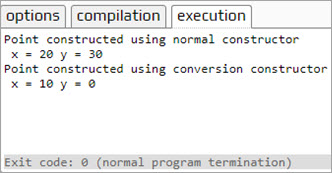 Here we have a class Point that defines a constructor with default values. In the main function, we construct an object pt with x and y coordinates. Next, we just assign pt a value of 10. This is where the conversion constructor is called and x is assigned a value of 10 while y is given the default value of 0.

While performing operator overloading, we need to watch out the below rules.

Operator overloading in C++ allows us to extend the functionality of operators to the user-defined types including class objects in addition to the built-in types.

Compile time polymorphism provides overloading facility mainly to extend the functionality of the code in terms of function overloading and operator overloading.

Through function overloading, we can write more than one function with the same name but different parameters and types. This makes the code simple and easily readable. By operator overloading, we can extend the functionality of operators, so that we can do basic operations on user-defined types as well.

In our upcoming tutorial, we will learn more about runtime polymorphism in C++.