This Tutorial Explains C++ Hash Tables And Hash Maps. You Will Also Learn About Hash Table Applications And Implementation in C++:

Hashing is a technique using which we can map a large amount of data to a smaller table using a “hash function”.

Using the hashing technique, we can search the data more quickly and efficiently when compared to other searching techniques like linear and binary search.

Let us understand the hashing technique with an example in this tutorial. 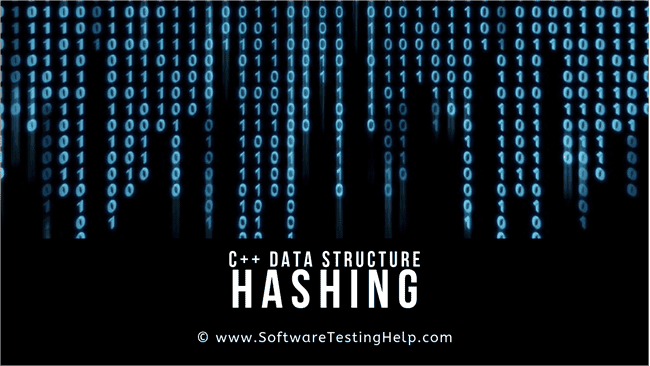 Let us take an example of a college library which houses thousands of books. The books are arranged according to subjects, departments, etc. But still, each section will have numerous books which thereby make searching for books highly difficult.

Thus, to overcome this difficulty we assign a unique number or key to each book so that we instantly know the location of the book. This indeed is achieved through hashing.

Continuing with our library example, instead of identifying each book based on its department, subject, section, etc. that can result in a very long string, we compute a unique integer value or key for each book in the library using a unique function and store these keys in a separate table.

Let us consider a hash function h(x) that maps the value “x” at “x%10” in the array. For the given data, we can construct a hash table containing keys or Hash codes or Hashes as shown in the below diagram. 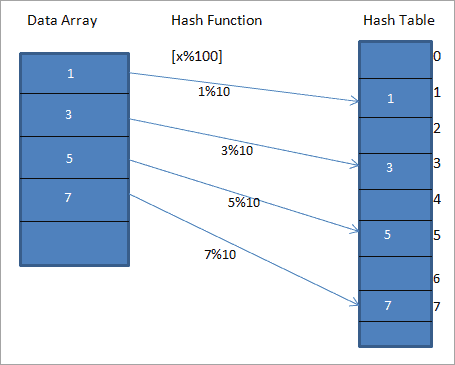 In the above diagram, we can see that the entries in the array are mapped to their positions in the hash table using a hash function.

Thus we can say that hashing is implemented using two steps as mentioned below:

#1) The value is converted into a unique integer key or hash by using a hash function. It is used as an index to store the original element, which falls into the hash table.

In the above diagram, value 1 in the hash table is the unique key to store element 1 from the data array given on the LHS of the diagram.

#2) The element from the data array is stored in the hash table where it can be quickly retrieved using the hashed key. In the above diagram, we saw that we have stored all the elements in the hash table after computing their respective locations using a hash function. We can use the following expressions to retrieve hash values and index.

A hash function basically should fulfill the following requirements:

Hash table or a hash map is a data structure that stores pointers to the elements of the original data array.

In our library example, the hash table for the library will contain pointers to each of the books in the library.

Having entries in the hash table makes it easier to search for a particular element in the array.

As already seen, the hash table uses a hash function to compute the index into the array of buckets or slots using which the desired value can be found.

Assume that we have a hash table of size 10 as shown below:

Now let’s use the hash function given below.

Using the above function, we map the key values to the hash table locations as shown below.

Using the above table, we can represent the hash table as follows.

Thus when we need to access an element from the hash table, it will just take O (1) time to do the search.

We usually compute the hash code using the hash function so that we can map the key value to the hash code in the hash table. In the above example of the data array, let us insert a value 12. In that case, the hash_code for key value 12 will be 2. (12%10 = 2).

But in the hash table, we already have a mapping to key-value 22 for hash_code 2 as shown below:

In the case of hashing, even if we have a hash table of very large size then a collision is bound to be there. This is because we find a small unique value for a large key in general, hence it is completely possible for one or more value to have the same hash code at any given time.

The following are the techniques that we can employ to resolve collision in the hash table.

This is the most common collision resolution technique. This is also known as open hashing and is implemented using a linked list.

For the above example, Separate Chaining is represented below. 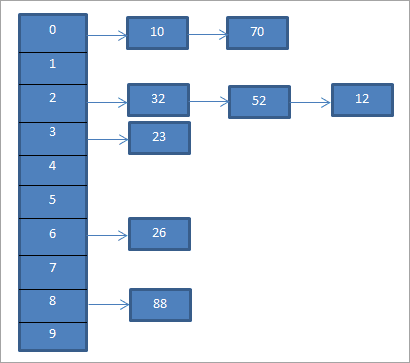 The above diagram represents chaining. Here we use the mod (%) function. We see that when two key values equate to the same hash code, then we link these elements to that hash code using a linked list.

If the keys are uniformly distributed across the hash table then the average cost of looking up for the particular key depends on the average number of keys in that linked list. Thus separate chaining remains effective even when there is an increase in the number of entries than the slots.

The worst-case for separate chaining is when all the keys equate to the same hash code and thus are inserted in one linked list only. Hence, we need to look up for all the entries in the hash table and the cost which are proportional to the number of keys in the table.

In open addressing or linear probing technique, all the entry records are stored in the hash table itself. When key-value maps to a hash code and the position pointed to by hash code is unoccupied, then the key value is inserted at that location.

If the position is already occupied, then using a probing sequence the key value is inserted in the next position which is unoccupied in the hash table.

For linear probing, the hash function may change as shown below:

We see that in case of linear probing the interval between slots or successive probes is constant i.e. 1. 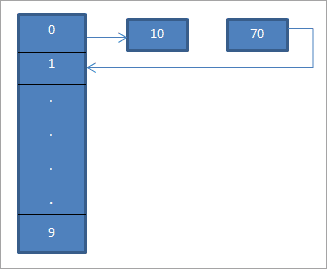 In the above diagram, we see that in the 0th location we enter 10 using the hash function “hash = hash%hash_tableSize”.

Now the element 70 also equates to location 0 in the hash table. But that location is already occupied. Hence using linear probing we will find the next location which is 1. As this location is unoccupied, we place the key 70 at this location as shown using an arrow.

The resultant Hash Table is shown below.

Linear probing may suffer from the problem of “Primary Clustering” in which there is a chance that the continuous cells may get occupied and the probability of inserting a new element gets reduced.

Also if two elements get the same value at the first hash function, then both these elements will follow the same probe sequence.

Quadratic probing is the same as linear probing with the only difference being the interval used for probing. As the name suggests, this technique uses non-linear or quadratic distance to occupy slots when a collision occurs instead of linear distance.

In quadratic probing, the interval between the slots is computed by adding an arbitrary polynomial value to the already hashed index. This technique reduces primary clustering to a significant extent but does not improve upon secondary clustering.

We can implement hashing by using arrays or linked lists to program the hash tables. In C++ we also have a feature called “hash map” which is a structure similar to a hash table but each entry is a key-value pair. In C++ its called hash map or simply a map. Hash map in C++ is usually unordered.

There is a <map> header defined in Standard Template Library (STL) of C++ which implements the functionality of maps. We have covered STL Maps in detail in our tutorial on STL.

The following implementation is for hashing using the linked lists as a data structure for the hash table. We also use “Chaining” as a collision resolution technique in this implementation.

Hash table after deletion of key 12:

The output shows a hash table which is created of size 7. We use chaining to resolve collision. We display the hash table after deleting one of the keys.

#2) Data Structures: Different data structures like unordered_set and unordered_map in C++, dictionaries in python or C#, HashSet and hash map in Java all use key-value pair wherein keys are unique values. The values can be the same for different keys. Hashing is used to implement these data structures.

#3) Message Digest: This is yet another application that uses a cryptographic hash. In message digests, we compute a hash for data being sent and received or even files and compare them with the stored values to ensure that the data files are not tampered with. The most common algorithm here is “SHA 256”.

#4) Compiler Operation: When the compiler compiles a program, the keywords for programming language are stored differently from the other identifies. The compiler uses a hash table for storing these keywords.

Hashing is the most widely used data structure as it takes constant time O (1) for insert, delete, and search operations. Hashing is mostly implemented by using a hash function that computes a unique smaller key value for large data entries. We can implement hashing using arrays and linked lists.

Whenever one or more data entries equate to the same values of keys, it results in a collision. We have seen various collision resolution techniques including linear probing, chaining, etc. We have also seen the implementation of hashing in C++.

To conclude, we can say that hashing is by far the most efficient data structure in the programming world.