Explore All About Recursion In C++ With Classic Examples.

In our previous tutorial, we learned more about functions in C++.

Apart from using the functions for breaking down the code into subunits and making the code simpler and readable, functions are useful in various other applications including real-time problems solving, mathematical and statistical computation.

As we develop more complex applications in C++, we come across many requirements so that we need to put several special concepts of C++ to use. Recursion is one such concept. 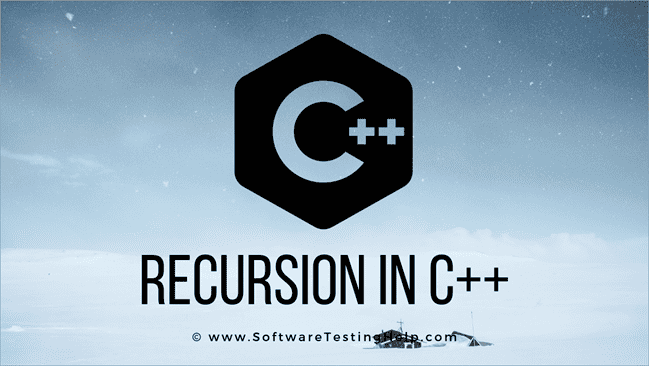 In this tutorial, we will learn more about recursion, where and why it is used along with some classic C++ examples that implement recursion.

The below image depicts how Recursion works: 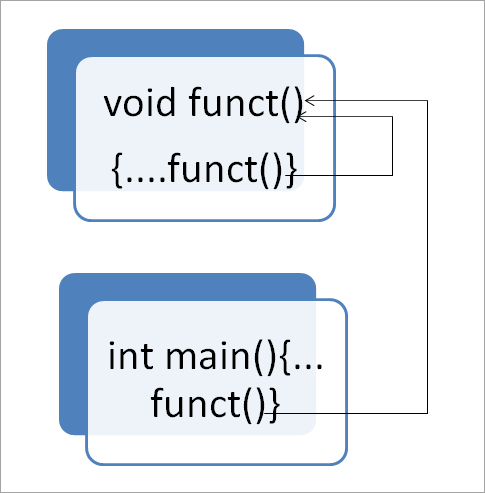 As we see in the above diagram, the main function calls a function, funct(). Function funct() in turn calls itself inside its definition. This is how the recursion works. This process of the function calling itself will continue until we provide a terminating condition which will make it end.

Usually, we provide code branch while implementing recursion such that we provide one condition that will trigger recursion and another to carry out normal execution.

Let’s consider a classic example of Recursion, the Factorial notation.

We know that mathematically the factorial of a number n is:

So programmatically we can express this calculation as follows:

Thus, as shown above, we have expressed the above calculation of a factorial into a recursive function call. We see that if the number n is less than or equal to 1, we return 1 instead of a recursive call. This is called the base condition/case for the factorial which allows stopping the recursion.

Hence, the base condition basically decides how many times a recursive function should call itself. This means that we can very well calculate the factorial of a larger number by expressing it in terms of smaller numbers until the base class is reached.

Given below is a perfect example to calculate the factorial of a number:

In the above example, we implement recursion. We take the number whose factorial is to be found from the standard input and then pass it to the factorial function.

In the factorial function, we have given the base condition as (n<=1). So, when the base case is reached, the function returns. Using this base case, we can calculate factorial of any number greater than 1.

Memory Allocation For The Recursive Call

When the base condition is reached, the function returns to the calling function and the memory is de-allocated and the process continues.

When recursion continues for an unlimited amount of time, it can result in a stack overflow.

For Example, we modify the above factorial program and change its base condition.

In the above code, we have changed the base condition to (n==1000). Now, if we give the number n = 10, we can conclude that the base condition will never reach. This way at some point, the memory on the stack will be exhausted thereby resulting in a stack overflow.

Hence, while designing recursive programs, we need to be careful about the base condition we provide.

So far in recursion, we have seen the function calling itself. This is the direct recursion.

Let us revise our factorial program to demonstrate direct recursion.

For Example, consider the following function.

In the above example, the display is a tailed recursive function such that it is the last function call.

Tailed functions are considered better than non-tailed recursive functions as they can be optimized by the compiler. The reason is that as the tailed recursive call is the last statement in the function, there is no code to be executed after this call.

As a result, saving the current stack frame for the function is not required.

Pros/Cons Of Recursion Over Iterative Programming

Recursive programs provide compact and clean code. A recursive program is a simple way of writing programs. There are some inherent problems like factorial, Fibonacci sequence, towers of Hanoi, tree traversals, etc. which require recursion for solving.

In other words, they are solved efficiently with recursion. They can also be solved with iterative programming using stacks or other data structures but there are chances to become more complex to implement.

Problem-solving powers of recursive as well as iterative programming are the same. However, recursive programs take more memory space as all the function calls need to be stored on the stack until the base case is matched.

Recursive functions also have a time overhead because of too many function calls and return values.

Next, we will implement some of the examples of recursive programming.

Fibonacci series is the sequence that is given as

As shown above, the first two numbers of Fibonacci series are 0 and 1. The next number in the sequence is the sum of the previous two numbers.

In this example, we have used a recursive call to generate the Fibonacci sequence. We see that the first two numbers being constant are directly printed and for the next numbers in the sequence we use a recursive function.

A palindrome number is a number which when read in reverse direction, is the same as read in a left to right direction.

For Example, the number 121 while reading from left to right and right to left reads the same i.e. 121. Hence 121 is a palindrome.

Enter the number to check palindrome:6556
Number 6556 is a palindrome

Screenshot for the same is given below.

In the above program, we read the input number from the standard input. Then we pass this number to a recursive function to reverse the digits of a number. If the reversed digits and the input number are the same then the number is a palindrome.

With this, we have finished with the recursion. In this tutorial, we have studied recursive programming, recursive function, its advantages/disadvantages, along with various examples in detail.

Apart from these examples, recursion is also used in solving some standard problems like traversals (inorder/preorder/postorder), towers of Hanoi, BFS traversal, etc.