Introduction to JSON: A Complete JSON Tutorial series for beginners

JavaScript Object Notion which is commonly known as JSON is one of the most popular data transition formats. It is a text-based and lightweight format for data transactions. JSON format was first computed by Douglas Crockford.

This being a text-based format is easier to read or write by the user and at the same time, its lightweight property makes it a stress-free alternative for machines to deconstruct or generate. It is basically a subset of the JavaScript but JSON, as a text format is totally independent of any of the programming languages used as almost all the languages, can easily analyze the text.

Its unique properties like text-based, lightweight, language independence etc. make it an ideal candidate for the data-interchange operations.

This tutorial gives you a complete overview of JSON, thereby briefing about its objects, properties, usage, and arrays with some examples for your easy and better understanding. 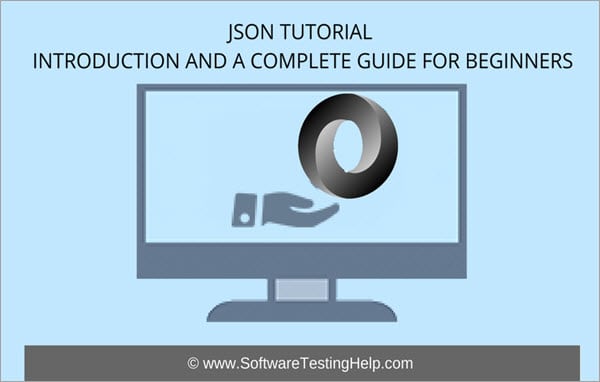 JSON is mostly used to transfer the data from one system to another. It can transfer data between two computers, database, programs etc.

So far, we discussed JSON properties and usage. From here on, we will discuss the structure of JSON or JavaScript Object Notion.

JSON grew out of a need for a real-time server to browser communication procedure that can operate without using any extra plugins like java applets or flash. So, after realizing the need for a communication protocol that can be used in real-time, Douglas Crockford specified JSON in early 2000.

Earlier JSON was viewed as the subcategory of JavaScript and was vividly used with the same. But the code for serializing and parsing JSON is available in almost all the major languages.

By now, you must have gained some basic knowledge about JSON. Let’s take a look at the basic syntax which is used in forming a JSON.

JSON can be basically classified by being built on two structural entities. They are a collection of name-value pairs and the ordered list of values.

JSON is a universal data structure as most of the programming language available today support them. It makes the work of a programmer lot more easier to have an interchangeable data type that can work across different languages.

We have seen almost all the basic theories until now. Let’s move on and have a look at the basic JSON structure. In this Example, we are considering a JSON representing the details of a Car.

Let’s assume we have a car object with the following basic properties and their attributes:

So, if we want to transfer this data using a JSON file, then the serialization of this data will create a JSON.

We have seen about the usage of JSON, its basic structure and how data is presented in the JSON format. Now, let’s take a  close look at how different elements are structured in JSON.

What is a JSON Object?

JSON object is a set of Keys along with its values without any specific order.

The key and their values are grouped using curly braces, both opening and closing “{ }”. So, in the previous Example when we were creating a JSON with a car attribute, we were actually creating a JSON car Object. There are certain rules that need to be followed while creating a JSON structure, we will learn about those rules while discussing the Key value pairs.

So, in order to create a JSON, the first thing we will need is an attribute. Here, we are creating an “Employee” JSON object. Next thing we need is to specify the properties of the object, let’s assume our employee have a “First Name”, “Last Name”, “employee ID” and “designation”. These properties of the employee are represented as “Keys” in the JSON structure.

Everything within the curly braces is known as JSON Employee Object.

A basic JSON object is represented by Key-Value pair. In the previous Example, we used a JSON to represent an employee data.

Generic Rules to be followed while creating a JSON:

A small exercise for you.

Try to create a sample JSON describing an “Employee” with your own set of Keys and Values.

By now, you must have had a basic understanding of what is JSON? Usage of JSON and How it looks? Now, let’s dive deeper into more complex JSON structures.

Arrays in JSON are similar to the ones that are present in any programming language, the array in JSON is also an ordered collection of data. The array starts with a left square bracket “[“and ends with right square bracket “]”. The values inside the array are separated by a comma. There are some basic rules that need to be followed if you are going to use an array in a JSON.

Let’s have a look at a sample JSON with an Array. We will use the same Employee object that we used earlier. We will add another property like “Language expertise”. An employee can have expertise in multiple programming languages. So, in this case, we can use an array to offer a better way to record multiple language expertise values.

As we have already discussed there are also few rules that need to be followed, while including an array in a JSON.

Objects, Key-value pair, and Arrays make different components of the JSON. These can be used together to record any data in a JSON.

Now, as we have already discussed the basic structure of JSON lets start working on a more complex JSON structure.

Earlier in this tutorial, we gave you two Examples of JSON as shown below.

In order to include the car in the Employee JSON, initially, we need to include a Key as “car” in the JSON.

Once we have added the car key in the employee JSON, we can then pass the value directly to the Car JSON.

In this way, we can create a Nested JSON.

Let’s assume a situation where there are multiple employees, so we will have to create a JSON that can hold the data for several employees.

In the above Example, you can clearly see that we have included the data for two employees. Again there are few considerations while creating this kind of complex JSON structures. First, remember to include all the JSON structure inside a square bracket “[ ]”. A comma is used to separate the two different set of data in a JSON, whether it’s a key-value pair or a JSON object.

As we get to the end of the tutorial, here is a little exercise for you all.

Given below are the steps you will need to follow:

#1) Open a notepad or any text editor.

#4) Include an array field in the JSON.

#7) Paste your JSON structure inside the text area and click on validate to validate your JSON.

Make sure you follow all the above procedures and rules while creating a JSON. Here is the validation of the employee JSON that we created earlier using JSON Validator. 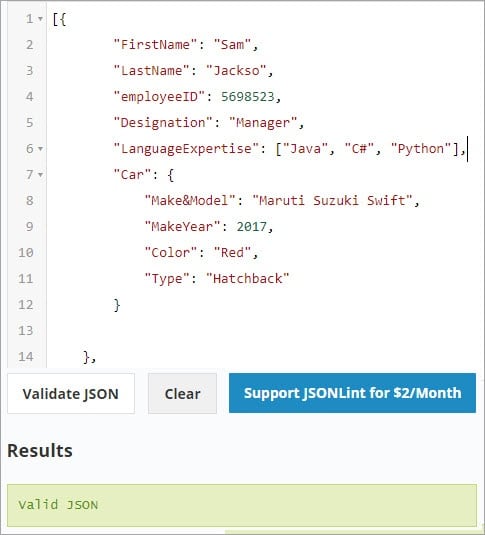 JSON is one of the most popular data transition formats. It is mostly used for data transition between different networks. The text-based structure means that JSON can be read and deconstruct into individual data easily either by a user or by any machine.

We can create a simple JSON by directly assigning Key-value pairs or we can use arrays to assign multiple values to a key. Other than the simple structure, JSON can also have a nested structure, which means a JSON can have another JSON object described inside it as a key. This allows the user to transmit more complex data through the format.

Please let us know if you have any queries or if need more clarification.

15 thoughts on “JSON Tutorial: Introduction and A Complete Guide for Beginners”