After learning about the three Pillars of OOP namely, Abstraction, Encapsulation, and Polymorphism in Java, we come to the last pillar of OOP i.e. inheritance.

Starting with this tutorial we will discuss inheritance in Java in the next couple of tutorials.

Inheritance in Java can be defined as a technique or process in which one object of a class acquires the behavior and properties of another object. This is done by inheriting the class or establishing a relationship between two classes.

For example, a Frog is an amphibian. Like other animals of the Amphibian class, Frog might have many characteristics that are common to other animals. So here an Amphibian is a species and animals like frogs are its members.

If we have to represent the amphibian species and its members in a software representation using OOP, then what we will do is we will develop a class “Amphibian” containing properties or behavior that is common to amphibians in general.

This way we do not have to duplicate the common properties and behavior for every amphibian animal we describe. We will directly create a class each for amphibian animals and inherits from the Amphibian class as shown below. 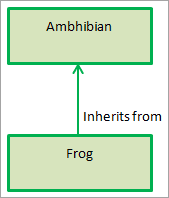 The following inheritance hierarchy is an example showing a superclass and subclass. 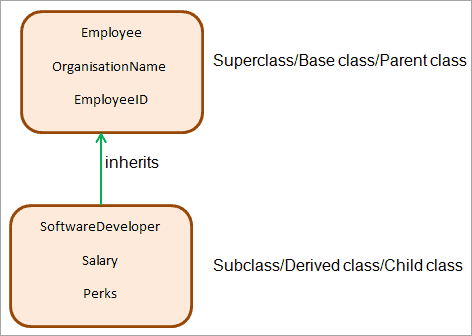 We have an Employee class with fields OrganisationName and EmployeeId. It can also have other fields like Employee name, department, and other employee details.

As shown in the above diagram, here Employee class is a Super or Base class and SoftwareDeveloper is a subclass or derived class.

In Java, the keyword ‘extends’ is used to inherit the class.

The general syntax of Java inheritance is given below:

As shown above, the ‘extends’ keyword appears after the classname in the class declaration syntax.

The keyword ‘extends’ conveys that we are creating a new class ‘SubClass’ that will inherit the properties and behavior from ‘SuperClass’. In other words, the extends keyword indicates that we are building a new class SubClass on the existing functionality of the SuperClass.

The inheritance implemented with the ‘extends’ keyword is the class inheritance. In the next tutorial, we will discuss another keyword ‘implements’ using which we can inherit interfaces.

An example of the Employee-SoftwareDeveloper class that we have explained above can be represented as:

So how we can interpret the above structure? As the Cow class extends or inherits Mammal, we can say “Cow IS A Mammal” or “Cow IS A Kind of Mammal”. Hence whenever we express such relationships, that particular relationship is the “IS_A” relationship.

Similarly, we can express some more IS-A relationships as follows: 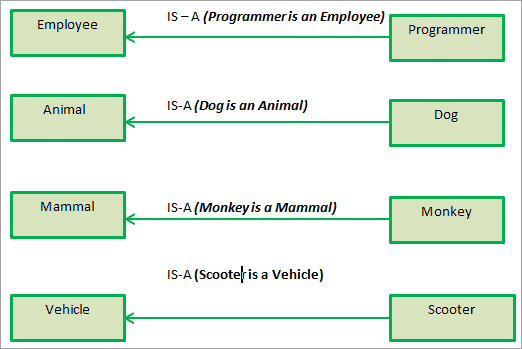 Given above are some of the common examples of relationships that we can express using inheritance in Java.

In general, the IS-A kind of relationships can be expressed using inheritance.

Now let’s see the example below:

In the above diagram, we see that a Vehicle is shown to have two parts i.e. Engine and Brake. So how we can put this scenario in words?

So what we are expressing here is not the “IS-A” relationship but a containment relationship wherein we specify one object as a part of another object.

So if we follow the same vehicle example above, then we can express it as below:

So a Vehicle has an engine and a brake. By expressing the relationship in the above manner, we are not interested in the internal implementation of Engine or brake. The vehicle class will let Engine and Brake classes know what is needed and those classes will provide it.

Let’s implement a simple example in Java to demonstrate inheritance.

In the main method of the program, we create a DerivedClass object and using this object we call the BaseClass as well as the DerivedClass method.

The output shows the messages printed by both methods. As DerivedClass extends the BaseClass and BaseClass method is public, it is visible to the DerivedClass.

In Inheritance, we deal with superclasses or parent classes and child classes. If we have to intermediately access superclass members including variables, methods, or constructors, then we need to have some mechanism. This mechanism of accessing the base class members is provided in Java using a “super” keyword.

So in which scenarios do we use the ‘super’ keyword in Java?

Enlisted below are scenarios in which a ‘super’ keyword can be helpful.

In the above figure, we have shown an inheritance structure. In the base as well as derived class, we have a String variable myStr. In the derivedClass, we have a printStr () function. In this method, we have used the ‘super’ keyword to access the myStr variable from the base class.

In the figure, we have shown the arrows pointing to the base class member variable and derived class variable.

The following Java program demonstrates the use of a ‘super’ keyword to access variables from the base class.

The following program demonstrates this.

When we inherit one class from another, note that the constructors are not inherited.

For calling the superclass constructor we use the method call.

The following method demonstrates the access to super constructors in Java.

As the base class has a parameterized constructor, we also pass the appropriate parameter to the super call while calling the constructor.

If there is no explicit call made to the super constructor as above, then the compiler always adds an implicit call to super () automatically. But note that this will be a call to the default constructor of the superclass.

Q #1) What is Inheritance in Java?

Answer: A process by which one class acquires the properties and behavior of another class is called inheritance. In Java, one class is inherited by another class using the ‘extends’ keyword.

Inheritance promotes reusability of code as by inheriting we can acquire and use the already existing properties and behavior of an inherited class without having to write duplicate code.

Q #2) Why is Inheritance used in Java?

Answer: Inheritance is mainly used to improve the reusability of the application. Using inheritance we can use ready classes in our application. We do not have to write our code if we have the functionality ready.

Q #3) What are the Advantages of Inheritance?

Answer: Reusability is the key advantage of inheritance. Sharing of code through inheritance also results in better readability and better organization of code.

Q #4) What are the features of Inheritance?

Answer: Any characteristic or feature acquired from the older generation is done through inheritance. For example, the light-eye trait that occurs in many families is an example of inheritance.

From a programming viewpoint, inheritance provides the feature of reusability and method overriding.

Answer: No. Because if we don’t call super (), the compiler does it implicitly for us. But then implicit invocation of super () is the default base class constructor. So if we need a parameterized constructor from a base class, then we should call it explicitly.

In this tutorial, we introduced the concept of Inheritance in Java. Inheritance is the process of acquiring the properties and behavior of one class in another class. We discussed the basic definition and terminology we use in inheritance here.

Then we discussed the ‘extends’ and ‘super’ keywords in Java that are used in connection with the inheritance. Extends is used to implement inheritance. The super keyword is used to refer to the base class constructor, method, or variable from the derived class.