When talking in terms of testing large application using black box testing technique, involves the combination of many modules which are tightly coupled with each other. We can apply the Integration testing technique concepts for testing these types of scenarios. 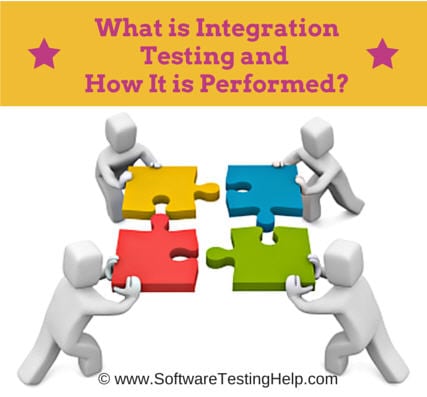 What is integration testing?

The meaning of Integration testing is quite straightforward- Integrate/combine the unit tested module one by one and test the behavior as a combined unit.

The main function or goal of this testing is to test the interfaces between the units/modules.

We normally do Integration testing after “Unit testing”. Once all the individual units are created and tested, we start combining those “Unit Tested” modules and start doing the integrated testing.

The main function or goal of this testing is to test the interfaces between the units/modules.

Here we should understand that Integration testing does not happen at the end of the cycle, rather it is conducted simultaneously with the development. So in most of the times, all the modules are not actually available to test and here is what the challenge comes to test something which does not exist!

We feel that Integration testing is complex and requires some development and logical skill. That’s true! Then what is the purpose of integrating this testing into our testing strategy?

Here are some reasons:

There are several advantages of this testing and few of them are listed below.

Listed below are few challenges that are involved in Integration Test.

There might be different paths and permutations which can be applied to test the integrated system.

#2) Managing Integration testing becomes complex because of few factors involved in it like the database, Platform, environment etc.

In order to minimize the impact while developing a system, few things should be taken into consideration like possible integration with other systems, etc.

Given below is a type of Test Integration along with its advantages and disadvantages.

Big bang approach integrates all the modules in one go i.e. it does not go for integrating the modules one by one. It verifies if the system works as expected or not once integrated. If any issue is detected in the completely integrated module, then it becomes difficult to find out which module has caused the issue. 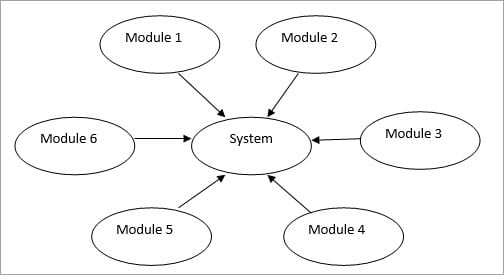 There are fundamentally 2 approaches for doing test integration:

Let’s consider the below figure to test the approaches:

In simple words, DRIVERS are the dummy programs which are used to call the functions of the lowest module in a case when the calling function does not exist. The bottom-up technique requires module driver to feed test case input to the interface of the module being tested.

The advantage of this approach is that, if a major fault exists at the lowest unit of the program, it is easier to detect it, and corrective measures can be taken.

The disadvantage is that the main program actually does not exist until the last module is integrated and tested. As a result, the higher level design flaws will be detected only at the end.

“Stubs” can be referred to as code a snippet which accepts the inputs/requests from the top module and returns the results/ response. This way, in spite of the lower modules, do not exist, we are able to test the top module.

In practical scenarios, the behavior of stubs is not that simple as it seems. In this era of complex modules and architecture, the called module, most of the time involves complex business logic like connecting to a database. As a result, creating Stubs becomes as complex and time taking as the real module. In some cases, Stub module may turn out to be bigger than the stimulated module.

Both Stubs and drivers are dummy piece of code which is used for testing the “non- existing” modules. They trigger the functions/method and return the response, which is compared to the expected behavior

Let’s conclude some difference between Stubs and Driver:

The only change is Constant in this world, so we have another approach called “Sandwich testing” which combines the features of both Top-down and bottom-up approach. When we test huge programs like Operating systems, we have to have some more techniques which are efficient and boosts more confidence. Sandwich testing plays a very important role here, where both, the Top down and bottom up testing are started simultaneously.

Integration starts with the middle layer and moves simultaneously towards up and down. In case of our figure, our testing will start from B1 and B2, where one arm will test the upper module A and another arm will test the lower modules B1C1, B1C2 & B2C1, B2C2.

Since both the approach starts simultaneously, this technique is a bit complex and requires more people along with specific skill sets and thus adds to the cost.

Now let’s talk about how we can imply integration testing in Black box technique.

Let’s check the below example:

I am the owner of an advertising company and I post ads on different websites. At the end of the month, I want to see how many people saw my ads and how many people clicked on my ads. I need a report for my ads displayed and I charge accordingly to my clients.

GenNext software developed this product for me and below was the architecture: 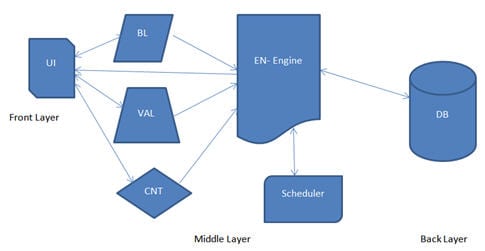 UI – User Interface module, which is visible to the end user, where all the inputs are given.
BL – Is the Business Logic module, which has all the all the calculations and business specific methods.
VAL – Is the Validation module, which has all the validations of the correctness of the input.
CNT – Is the content module which has all the static contents, specific to the inputs entered by the user. These contents are displayed in the reports.
EN – Is the Engine module, this module reads all the data that comes from BL, VAL and CNT module and extracts the SQL query and triggers it to the database.
Scheduler – Is a module which schedules all the reports based on the user selection (monthly, quarterly, semiannually & annually)
DB – Is the Database.

Now, having seen the architecture of the entire web application, as a single unit, Integration testing, in this case, will focus on the flow of data between the modules.

The questions here are:

In the real world, the communication of data is done in an XML format. So whatever data the user enters in the UI, it gets converted into an XML format.

In the middle we have the scheduler module which receives the result set from the EN module, creates and schedules the reports.

So where Integration testing does comes into the picture?

Try to generate or get the XML files and update the tags and check the behavior. This is something very different from the usual testing which testers normally do, but this will add value to the testers knowledge and understanding of the application.

Few other sample test conditions can be as follows:

Steps to Kick off Integration Tests

Integration test cases focus mainly on the interface between the modules, integrated links, data transfer between the modules as modules/components that are already unit tested i.e. the functionality and the other testing aspects have already been covered.

So, the main idea is to test if integrating two working modules works as expected when integrated.

For Example Integration Test cases for Linkedin application will include:

Is Integration a White box or Black box Technique?

Now while performing integration testing it could include testing the two integrated web services which will fetch the data from the database & provide the data as required which means it could be tested using white box testing technique whereas integrating a new feature in the website can be tested using the black box technique.

So, it’s not specific that integration testing is a black box or white box technique.

There are several tools available for this testing.

For more details on the above tools check this tutorial:

Modules or components are tested individually in unit testing before integrating the components.

Integration testing is a testing in which one or two modules which are unit tested are integrated to test and verification is done to verify if the integrated modules work as expected or not.

System testing is a testing where the system as a whole is tested i.e. all the modules/components are integrated together to verify whether the system works as expected and no issues occur because of the integrated modules.

This is all about Integration testing and its implementation in both White box and Black box technique. Hope we explained it clearly with relevant examples.

Test Integration is an important part of the testing cycle as it makes it easier to find the defect when two or more modules are integrated in order to integrate all the modules all together in the first step itself.

It helps in finding the defects at an early stage which in turn saves the effort and cost as well. It ensures that the integrated modules work properly as expected.

Hope this informative tutorial on Integration Testing would have enriched your knowledge of the concept.