Importance Of Type Qualifiers And Storage Classes In C++.

In this Exclusive C++ Training Series, we will extend the topic of variables further and see type qualifiers and storage classes in C++ in this tutorial. Though this is a small topic, it is very important and significant as far as C++ programming is concerned.

The type qualifiers in C++ do not change the meaning of the variables or entities they are used with, rather they only add extra information to the entity. 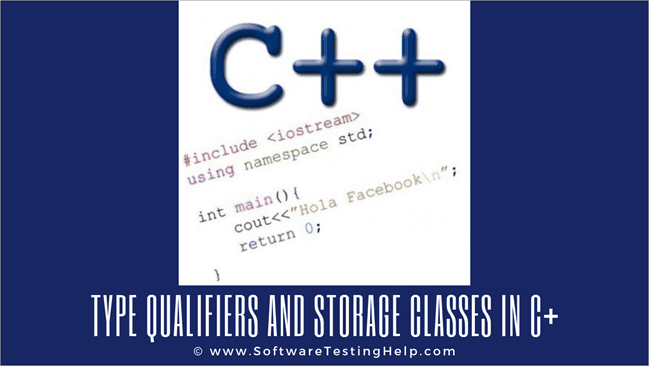 Type qualifiers in C++ add extra properties to the variable like a variable being a constant or a volatile.

In C++, type qualifier is specified just before the type specifier (data type) of the variable.

Type qualifiers in C++ are classified as shown below:

The definition of constants using ‘const’ keyword corresponds to the type qualifier ‘const’.

The type qualifier “volatile” means that the value of the variable marked volatile may be changed in other ways that are not specified by the program. The variables that are volatile change usually due to some external factors and not necessarily because of the program. In other words, they are volatile in nature.

For Example, a variable that reads the temperature in a real word can be made volatile as the reading temperature may not be completely controlled by the program.

So far, we have discussed all C++ variables in detail. We have seen that variables are declared with their respective data types and then used in the program. In order to fully define a variable, we also require storage classes apart from their data types.

Though we have not specified any storage classes till now for variables, there was a default storage class “auto” which was applied to all the variables.

So what are Storage Classes?

The visibility or scope of the variable is to which functions or modules the variable will be accessible. These storage classes are specified before the data type of variable.

In C++, we have the following storage classes:

If the variables having “auto” storage class are not initialized or assigned any value, then they have garbage or undefined values.

Let us see an example of auto variables in a C++ program.

Now we can see that I and f are the two local variables that we have defined in the function main with default storage class ‘auto’.

As we have not assigned any values to them, when we print these variables, we see that both have values = 0. This is entirely compiler dependent as to what values to assign auto local variable if they are not already assigned any value in the program.

NOTE: Starting from C++11, the auto keyword is used for type inference. This means that we can use a code like auto i=10 and data type of I will be directly inferred from the initializer used for i. Hence, if we declare something like ‘auto float f;’, then the compiler is going to show an error.

So, we usually do not use declaration for storage class auto as it is implied that the default will always be auto storage class.

When we have a requirement that a variable needs faster access, then we use register storage class. So instead of storing the variables in Random Access Memory (RAM), these variables are stored in the CPU register and have a size equal to that of a register.

Register variables have the scope and lifetime similar to the auto variables.

The above code with one register variable will give the same output as the one with an auto storage class.

The extern storage class is required when the variables need to be shared across multiple files. Extern variables have global scope and these variables are visible outside the file in which they are declared.

As extern variables are the variables declared and defined outside in another file they are not initialized.

Extern variables can be declared as follows:

Static storage class tells the compiler to maintain the value of the variable throughout the lifetime of the program. Static variables are similar to the local variables but are preceded by a ‘static’ keyword.

Let us see the following Example to better understand the Static Storage Class.

In the above code, we have a function ‘printvar’ in which we have declared a static variable var of type int. We then increment this variable and print it. In the main function, we call the printvar function four times.

Note: Static storage class can also be applied to global variables. In this case, the variable will have global scope and additionally static storage.

We will learn more about the const functions & objects as well as mutable members in our later tutorials when we learn about object-oriented programming in C++.

In our upcoming tutorial, we will learn more about the various operators used in C++ along with their usage.