The SCM practices include vision controls in the establishment of baselines. If something goes wrong, SCM can determine what was changed and who changed it. 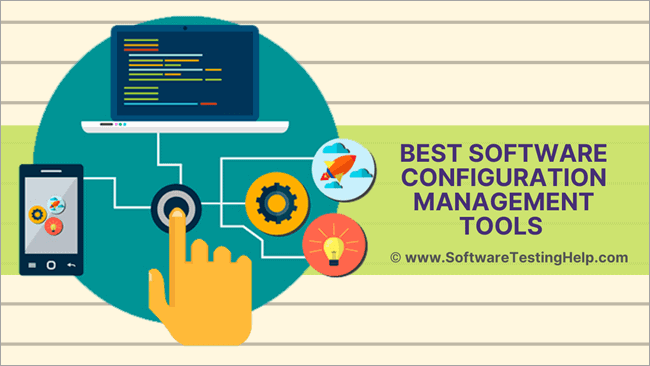 This is usually achieved by setting up a change control board whose primary function is to approve or reject all change request that is sent against any baseline. Configuration status accounting, reporting and recording all the necessary information on the status of the development process. 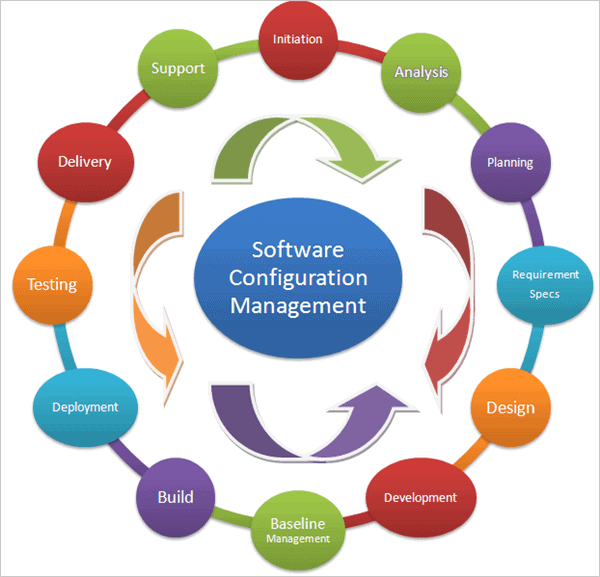 Here is the list of the top paid and free open source SCM Software tools with the comparison.

Why should the SolarWinds be chosen?

The solution is for multiple projects, easy to understand and offers affordable licensing.

As per reviews, it takes some time to get a hand on the tool.

Auvik is the provider of cloud-based network management tools. These tools offer true network visibility and control. It provides real-time network mapping & inventory, automated config backup & restore on network devices, deep insights of network traffic, and automated network monitoring. It helps with managing the network from anywhere you are.

Saving: 2.1 Million worth is saved.

Price: As open-source origins, CFEngine has a free open-source version available, but after 25 free nodes, the price is unspecified. 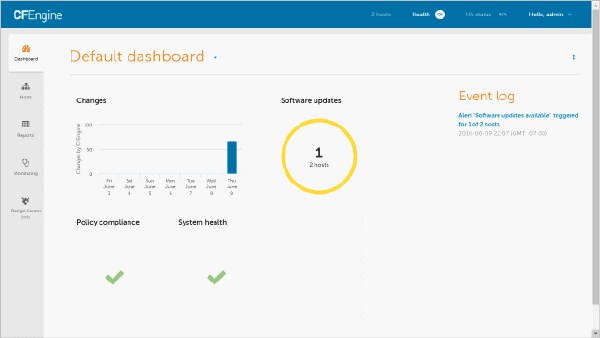 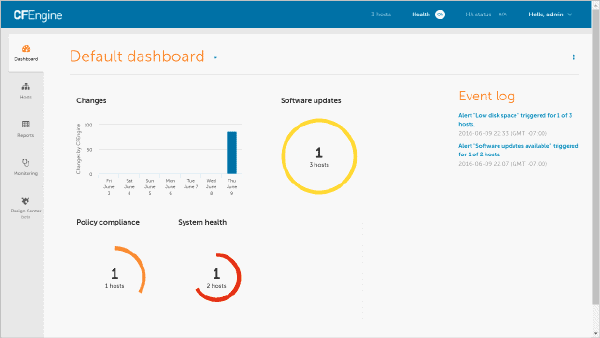 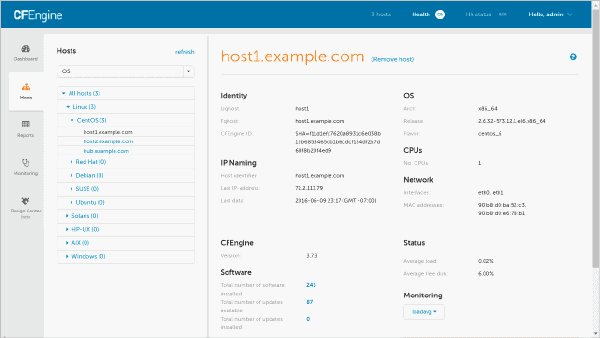 Puppet is an open-source software configuration management tool. It is used for deploying, configuring and managing servers. It uses a master-slave architecture.

Configurations are pulled from the master by the nodes. 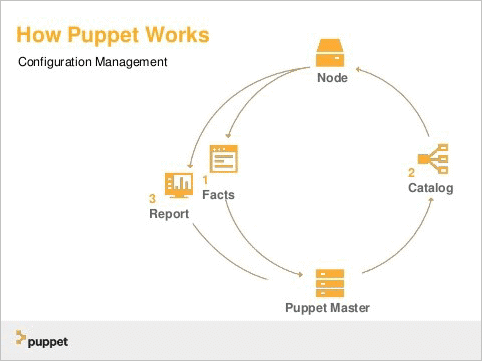 Price: Puppet Enterprise is free for up to 10 nodes. Standard pricing starts at $120 per node.

Why should the Puppet be chosen?

Pros: There are many positive aspects to it as mentioned below:

Cons: There are some disadvantages which are mentioned below: 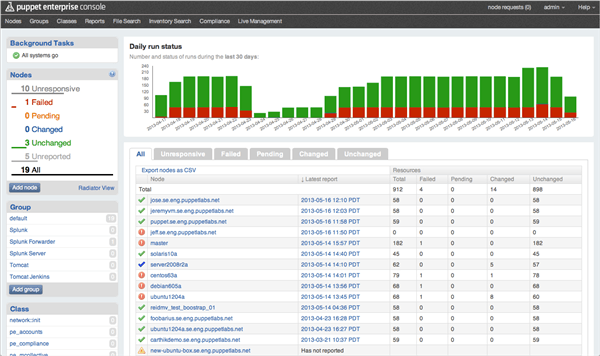 The chef is basically an automation platform that provides a way to configure and manage infrastructure. Infrastructure as code implies executing by coding rather than doing manual execution. The chef works on Ruby and DSL for writing the configurations.

On-Premise: Per model costing $6 per month, same as the Hosted Chef. Standard support is an additional $3 per month, and the premium version is $3.75 per month.

Why is CHEF preferred?
There are many reasons to prefer CHEF: 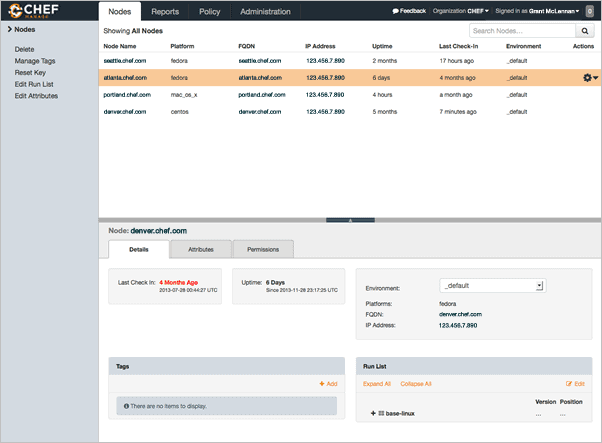 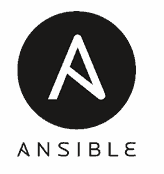 It is a push-based configuration tool. It helps to automate the entire IT infrastructure by providing large productivity gains. Ansible generally connects through SSH, remote PowerShell or via other remote APIs. 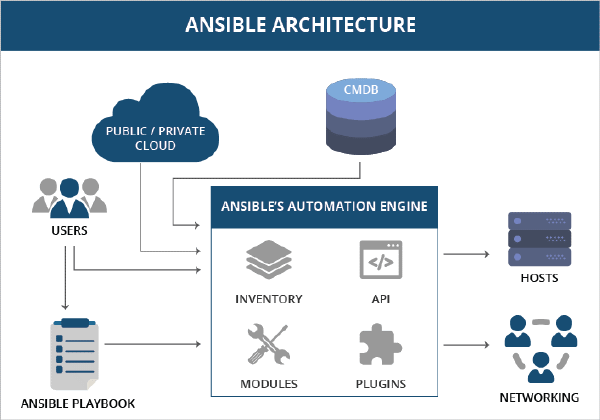 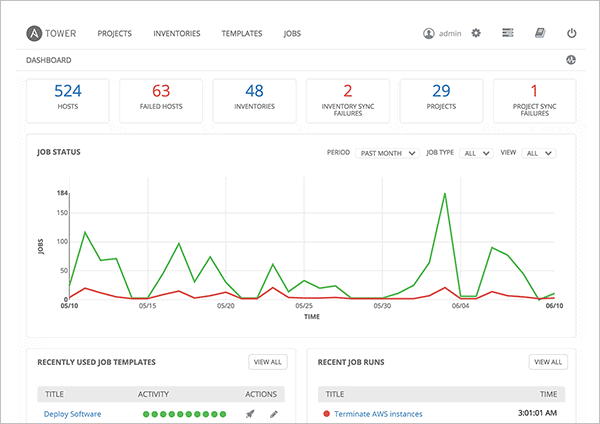 The feature of Configuration Tool Ansible: 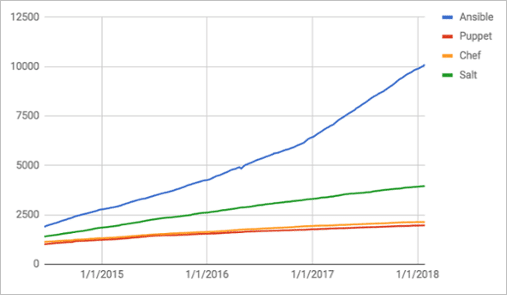 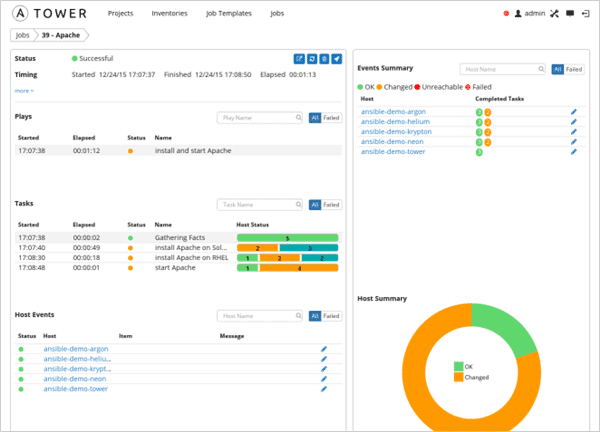 SaltStack is also a configuration tool that works on a master-client setup model or a non-centralized model. SaltStack is based on Python programming language, SaltStack provides a push and SSH methods to communicate with clients. SaltStack allows to group together clients and configuration templates to take control of the environment simple and easy. 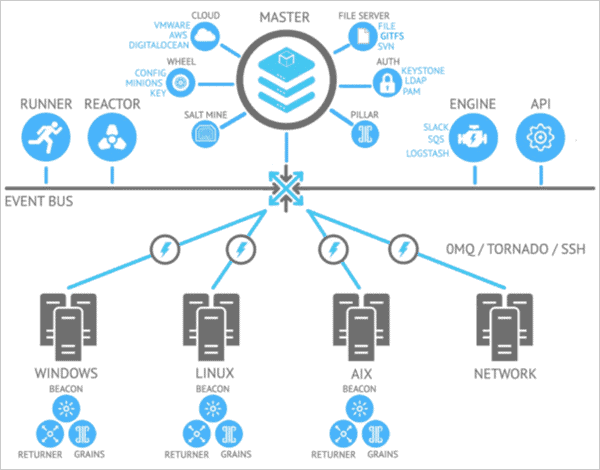 Price: It starts at $5,000/year excluding support; subsequent tiers run up to $14,000/year and include 8×5 or 24/7 support. However, it is based on research as the original price is not mentioned on the official site also.

The most important features of Saltstacks are as follows: 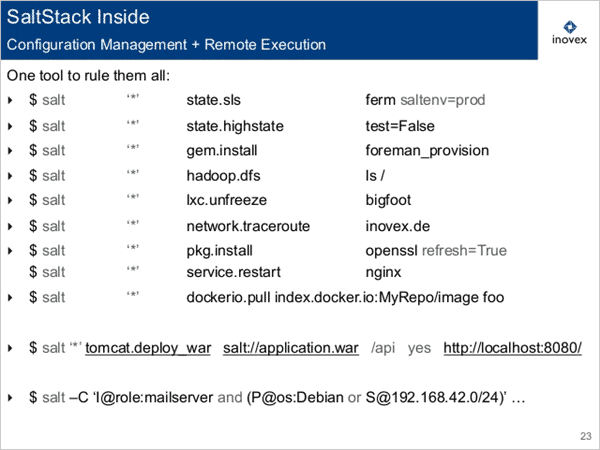 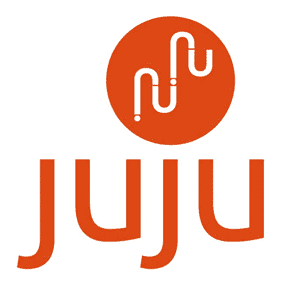 Juju is one of the famous configuration management tools which is open source and is created by Canonical Ltd.

Juju mainly emphasizes on decreasing the operational overhead of new generation software by providing facilities like quick deployment, configuring, scaling, integration, and doing operational tasks on a huge range of public and private cloud services along with only servers, open stacks, and local system based deployments.

Price: It starts at $4,000/year excluding support; subsequent tiers run up to $12,000/year and include 24/7 support. However, it is based on research as the original price is not mentioned on the official site also. 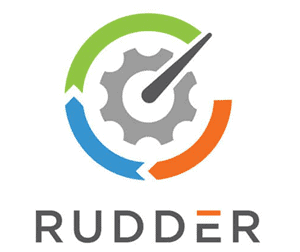 The rudder is one of the famous and most used open-source, web-driven, role-based solutions, configurations, and audit management tools to make automated system configuration across huge IT organizations and compliance.

Rudder depends on a light local agent which are installed on each and every managed system. Rudder’s server-side web interface is built by Scala language and its local agent is written in C language. 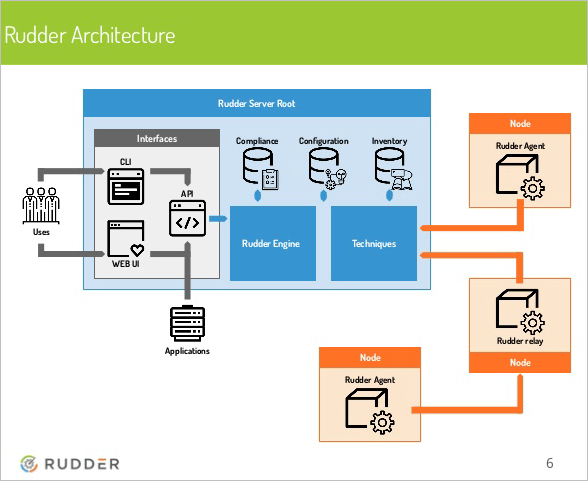 Price: It starts at $4,000/year excluding support; subsequent tiers run up to $10,000/year and include 8×5 or 24/7 support. However, it is based on research as the original price is not mentioned on the official site also.

Bamboo is one of Atlassian’s continuous delivery and releases management tools. 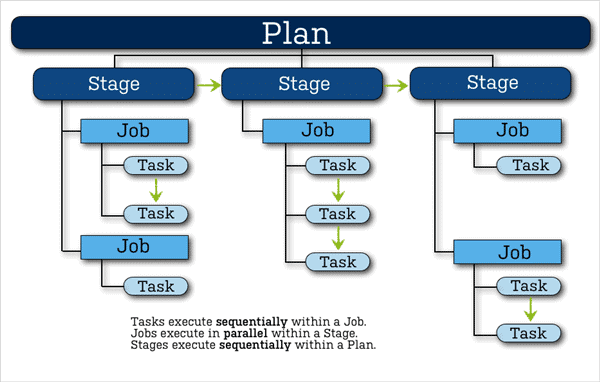 Annual Revenue: Approx. $ 2.7 Million
Employees: Around 2500 employees as it comes under Atlassian

Refer Images below for Bamboo Tool: 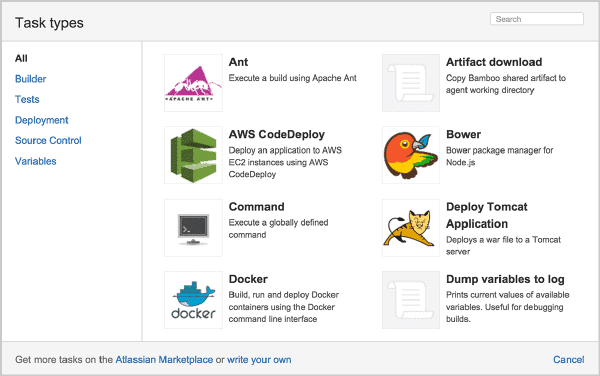 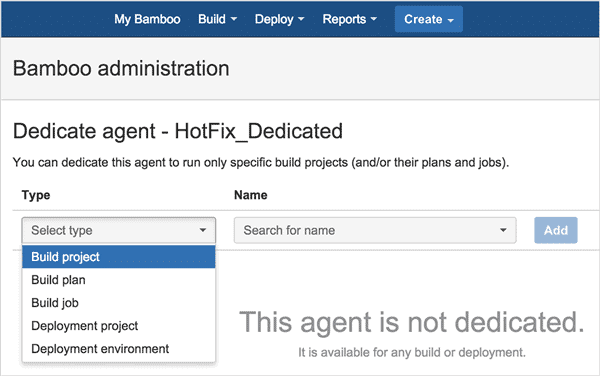 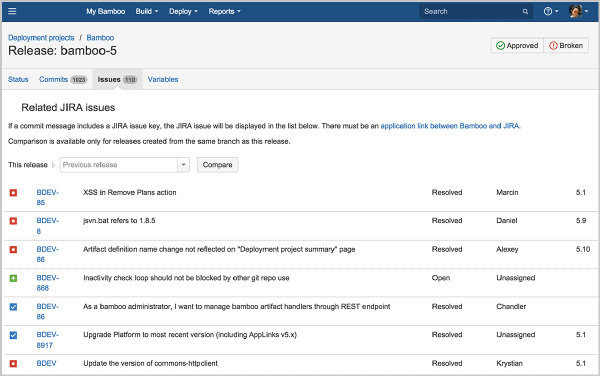 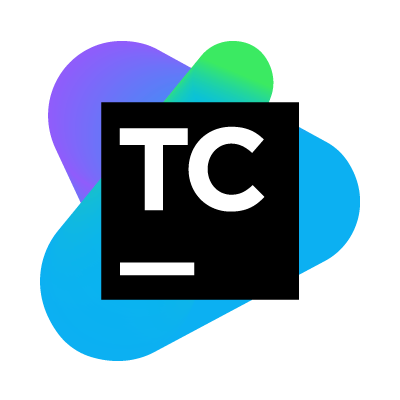 TeamCity is also one of the management and continuous integration server developed by Jet Brains and based on Java Programming Language.

Released on 2nd October, TeamCity provides up to 100 build configurations (jobs) and run unlimited builds. Concurrently it runs 3 agents and if needed it to add extra also. It possesses a public bug tracker and forum open to all the users. It’s open-source so free for all users.

Annual Revenue: TeamCity comes under JetBrains which has approx. $ 70.3 Million

Employees: Currently 720 employees are working and increasing even more. 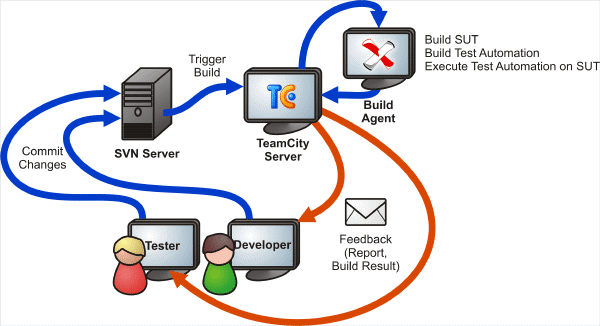 Below are few TeamCity tool Images for reference. 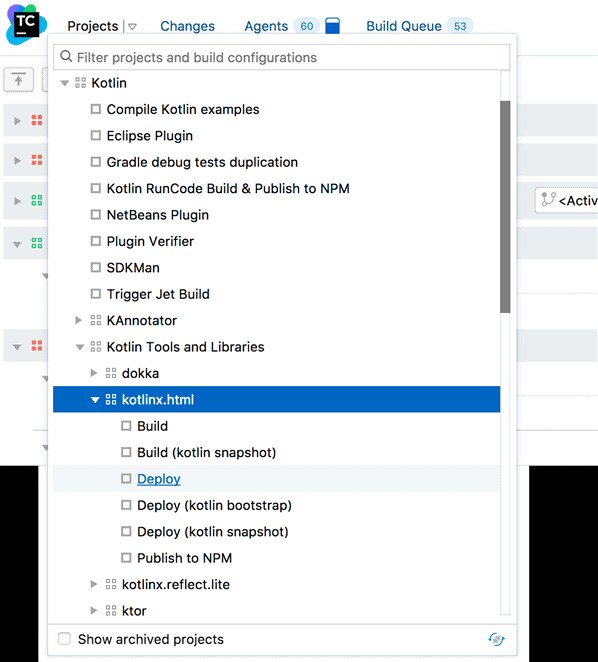 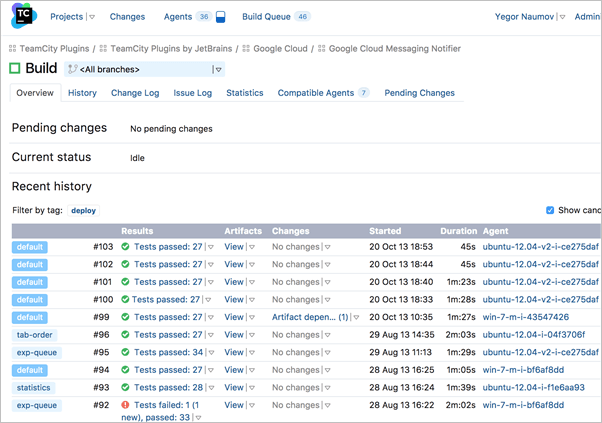 Octopus is one of the famous configuration tools which takes you beyond the limit where your Continuous Integration server ends.

Octopus Deploy helps you enable automation even for the most complex application deployments, whether the application is on-premises or in the cloud, it will not be an issue. 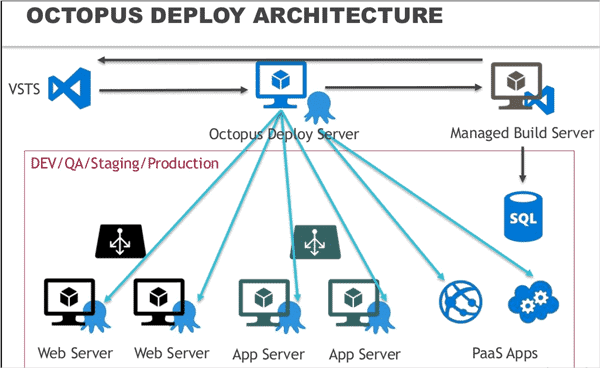 Price:
Cloud Starter: $ 10 per month for up to 5 users
Cloud Standard: $ 20 per user per month for any team size
Cloud Data Center: Depends on criticality.

Some screenshots of the Octopus Tool:

As there are many Configuration Management SCM Tools, it’s quite important to research and select the best tool which would be good for your organization. I hope this article will help you with that.

Small -Scale or Mid-Level Organization: As these types of organizations look for open-source and more effective tools that can be beneficial for their organization as they have less strength of employees and finance.

So for those CFEngine, CHEF, Rudder and Bamboo configuration tools would be a good choice as they are open-source, highly scalable and robust and secure. They are being used by many giant companies also. Maintenance and set up is easy.

They are based on most used programming languages like Java and .net. They support cross-functionality and multiple OS platforms. These tools support cloud adoption as well as 24*7 support.

They are open source as well as if the company wants the extended benefits they can opt for the enterprise version. These tools possess multiple features, granularity and orchestration, Idempotent, interoperability and a minimal learning curve is required.