An In-Depth Look At C++ Including Standard Libraries, Uses, And Other Features.

C++ is an object-oriented programming language. But the truth is that C++ also supports procedural and generic programming.

Read through this Entire C++ Training Series for a complete understanding of the concept. 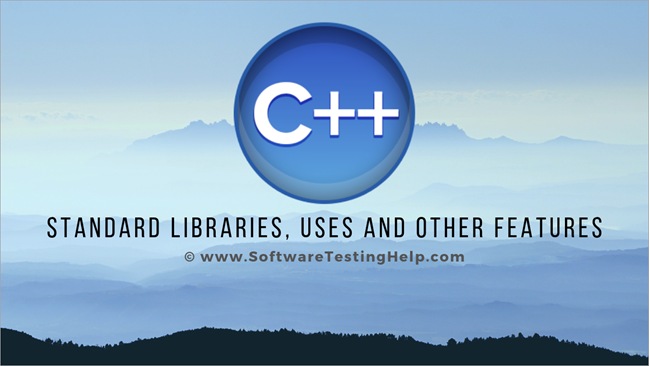 Initially, C++ was developed as an enhancement to C language and was introduced by Bjarne Stroustrup at Bell Labs in 1979. At that time it was named “C with Classes”. Later on, in 1983, it was renamed as C++.

As C++ is a superset of C, it supports almost all the features of C language and hence any program in C language is also a C++ program.

C++ supports all the features of object-oriented programming like:

Like all other programming languages, C++ language also has all the core structures like variables, constants, data types, etc.

In a nutshell, C++ is a strongly or statically typed, a general-purpose, case-sensitive, compiled language which is a free-form programming language.

Apart from these, it also supports object-oriented programming features and also a lot many other features like STL which make it a prominent language. Most of the C++ compilers supports ANSI standard which ensures that C++ is portable.

C++ can be used to program a variety of applications in almost every application domain.

Let’s see a simple example to print a string of characters to the console.

The source code or simply code (a set of programming instructions) written in C++ will look like:

The first line “#include<iostream.h>” is a directive to the compiler to include a library of I/O functions of C++, iostream.h. The #include directive is used to include external libraries that will be used in programming.

Using iostream.h file, we can write programs to input-output data and information in C++.

The next line using namespace std; is a command to include standard namespace std into the program. The namespace is similar to a package or a library that includes library functions as well.

After this, we have a function definition, int main(). All C++ program have a single entry point i.e. main() function. The return type of the main function is an integer.

The next statement “{“is the opening brace and it indicates the start of the block of code. After this, we will have a series of statements that serve our purpose (in this case, the printing of string). Once the code is finished, we close the function block with the closing brace “}”.

Every function in C++ should have these opening and closing braces to indicate the start and end of the code block.

After the opening brace, we have another statement, cout<<” Hello, World!! This is C++ Tutorial!! \n”;

This statement prints the statement “Hello, World!! This is C++ Tutorial!!” to the console. The function we use to print the string in C++ is “cout”(spelled as C Out) which is a part of the header file “iostream.h” that we included at the beginning of the code.

The function call ‘cout’ followed by ‘<<’ is called the insertion operator in C++. This operator is used to output the contents to the standard output device.

The next statement cin.get(); is yet another function call which is a part of “iostream.h”. ‘cin’ is the function call to read input from a standard input device like a keyboard.

In our C++ program, cin calls the get() function. This is similar to “getch()’ function in C which gives time for the user to read the console output. ‘cin’ followed by ‘>>’ is called the extraction operator in C++ and is used to read input from the standard input device.

Next statement in the code returns 0;

This is the signal to the compiler that the function code has ended and control can now return to the start of the main function. As the main function returns int value, we have to return a numeric value (in this case 0). In C++, returning 0 indicates success.

Thus this is the basic C++ program that we presented for the users to understand the basic syntax of C++ program.

Having understood this, the next question that naturally comes to our mind is who should learn C++? What are the prerequisites of learning C++?

Anyone interested in programming or with a desire to make it big in the programming world can go for C++. C++ is easy to learn but at times it can be tricky. However, by practicing and reading hard, anyone can master the language.

Though it’s vast and has a lot of concepts to be acquired, we feel once we understand these concepts only then it takes more and more practicing before you can master the language.

Although this tutorial will begin with the most basic concepts of C++, we still feel it’s necessary that the users taking up to learn C++ must have basic knowledge of Computers and should be well aware of computer fundamentals and basic programming terms.

Other than these prerequisites, anyone can learn C++. Even people who have been using other programming languages can make a switch to C++ anytime.

The major advantage of learning C++ is its vast usage in almost every field. C++ is practically irreplaceable. No other language can do each and everything that we can do with C++, though many languages have acquired few features of C++ from time to time.

C++ is used in low-level programming, so when given a chance, you can actually work and get to know the compiler and other low-level stuff by using C++. C++ programmers have more scope in the software world and in turn fetch higher salaries than the rest.

With all these advantages, you can just take a leap and start with our C++ tutorials.

Going forward, we will brief you all the concepts in C++ in detail so that everyone, right from a novice programmer to experienced can master this wonderful language easily.

=> Take A Look At The C++ Beginners Guide Here