This Tutorial Explains C# Data Types And Variables. You can Learn to Define, Initialize and Declare a Variable Along with Various Data Types in C#:

C# Program Structure and Basic Program were explained in detail in our previous tutorial.

This C# tutorial will educate you all about Data Type And Variables in C# with simple examples for your easy understanding. 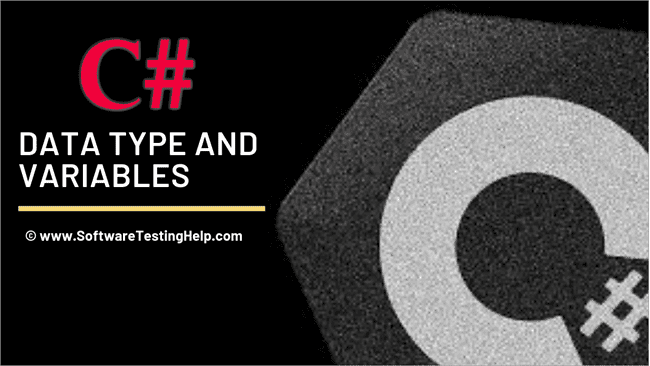 Data types are the key components of any programing language as we have already discussed in the previous tutorial that a data type must be declared for a variable.

A data type communicates with the compiler informing it about the type of data that a particular variable can hold inside it. C# has several data types built inside it like Boolean, Integer, Float, Decimal, etc.

Whenever a variable is declared with a data type, the system allocates some memory space to store its values.

Let’s have a look at some of the values and their ranges.

For Example, if we provide a value less than 0 or greater than 255 to a byte data type then it will throw an error. Data types are again classified into a Reference type, Value type, and Pointer type. This depends upon the variable characteristics as whether it is storing its data or is it just pointing to a specific data at a memory location.

Variable is the name that we provide to the storage location where we store our values. Each of the variables in the C# environment has its own type, which is further defined by its characteristics like type and size of value it can store. It also defines the set of operations that can be performed by the program to manipulate that value.

Following are the basic value types in the C# that can be further categorized into data types:

A variable in C# is always defined by using a data type. Thus, the syntax for a variable declaration will be as shown below.

Example: Here, we are initializing variables first and then we are declaring it in the latter part of the program.

Or, we can initialize and declare a variable at the same instance.

Here we are initializing a variable “val” with string data type and at the same time we are also assigning it a value i.e. “Hello World”

Multiple variable declarations are also possible in a single line by separating them with commas.

While declaring multiple variables, you can also put them in multiple lines for better readability. Even when they are spread across, multiple line compiler will consider them to be in the same command line until it encounters semicolon “;”.

We can also define one variable with an assigned value and can define another variable assigning the first variable to it.

A variable should be assigned with a value before its usage or else the compiler will show an error.

You can also accept values in a variable directly from a user by invoking Console class in the System namespace and using its ReadLine() function.

In the above section we have categorized the data types based on the type of value they accept and the quantitative memory they use for storing the data type. Further data types can be broadly divided into two categories based on how the value is stored in their memory.

Value type data types are the variable that holds a data value within its own designated personal memory space. Hence, these data types directly hold their values.

Here the integer variable “i” is directly holding the value of 20.

Some of the reference type data include string, arrays, class, etc. Hence, if any changes are made to the data then the other variable will automatically inherit the new changed value and if there are no values assigned to the reference type then by default it contains a null value.

There are three different reference type:

The object type is regarded as the base class for all the objects in the C# programming languages. The object types can be assigned with the values of any of the other types including value type, user-defined types or even any other reference type.

String type is one of the most widely used data types. It is used to assign a series of character values to a variable. The string keyword refers to the object type of the System. String class.

Data type conversion is converting one data type into another type. Sometimes it is also called as Type Casting in C#.

There are two types of Conversions:

For example, the conversion of integer to double. Even if we convert integer type data into a double type, no loss of data occurs as double being a larger type can easily hold a smaller type variable.

Explicit Conversions are carried by a user using type conversion syntax. For explicit conversion, a cast operator is required. This type of conversion is mostly used for converting larger types into smaller types or for converting base class to its derived class.

Due to the difference in the data structure, some data loss may occur during conversion and may even show an error. This is not a type-safe conversion.

Each data type has its own set of ranges inside which the value is declared and if we don’t have a declared value then a default value is stored. We also saw how one set of data type can be converted into another by using Implicit and Explicit conversion.

In the next tutorial, we will discuss in detail about data type and we will try to resolve some data type into another.