This tutorial explains what is Polymorphism in Java, the types of polymorphism, & how to implement compile-time polymorphism with examples:

The word “Polymorphism” derives from two words i.e. “Poly” which means many and “morphs” meaning forms. Thus polymorphism means many forms. In a programming language, we can say that an object can take many forms, and hence the object is polymorphic.

Polymorphism is one of the most important features of OOP and it allows us to express a feature (an object or a message or method or an operator) in various forms. 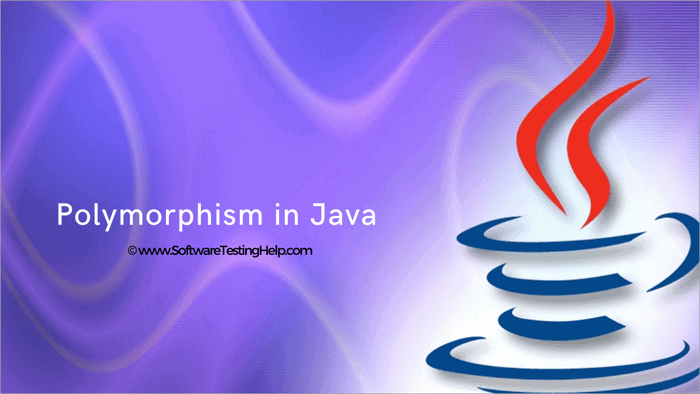 Introduction To Polymorphism In Java

For example, consider a ‘+’ (addition) operator in Java. This is a binary operator and takes two operands. When the operands that are passed to the ‘+’ operator are numbers, an addition operation that returns the sum of two numbers is performed.

When operands change to String type, the ‘+’ operator does not add the String objects but concatenates or joins the contents of the string to form a resultant third string.

For example, if “one” and “two” are the contents of two String objects then “one” + “two” will result in “one-two”. This is a concatenation.

In Java, all the objects are polymorphic as they all are derived from the “Object” class and thus fulfill the ‘IS-A” relationship with the Object class.

The type of this object reference will decide the class methods or functions that should be called.

For example, if there is an ABC class and class XYZ derived from ABC, both classes have a polymorphic method func ().

As we have seen in the above example, the method func () has different implementations but the same prototype. Depending on the object pointed by the reference object, we have the appropriate implementation in that scenario invoked. This is polymorphism.

Let’s understand a simple example of polymorphism in Java with the addition operation as discussed earlier.

The Java program is given below: 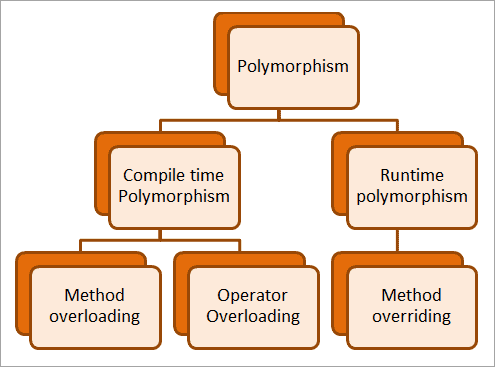 In Java, the compile-time polymorphism is performed using “Method Overloading”. Using method overloading, we can have one or more methods with the same name and only differentiated on numbers or type or order of parameters.

What is Overloading in Java in general?

Overloading in Java is a process of having more than one method with the same name and return type but differing on the sequent, number, and types of arguments. It is also called method overloading in general.

Method overloading is an implementation of compile-time polymorphism in Java. When we have one or more methods with the same name and/or return types but different parameter lists, then we say we have “overloaded” the methods.

So in a given class, we can have various methods with the same name but different argument lists.

How do we invoke overloaded methods? Or how does the compiler know which method is to be called?

The invocation of the exact method that matches the call is performed depending on the parameter list.

Now let’s see how to Overload a Method in Java?

Java provides three ways of method overloading depending on the variations in the parameter/argument list.

We can overload methods in Java depending on the data type of parameters.

Consider the following example wherein we have given prototypes of three methods.

As seen above, we have the same method name in all three cases and the same number of parameters but each method call has different types of parameters.

For example, if we have a method call like the below:

In the above method call, we can see that the first parameter is int type while the second parameter is float type. When the above call is encountered, the compiler resolves the parameter list and then invokes the appropriate method which is the second method above.

Now let’s implement a complete Java program to demonstrate the method of overloading based on the data types of parameters.

Another implementation of method overloading is by overloading methods with a different number of parameters in the function call.

The below example shows the program that uses the method of overloading based on the number of parameters.

The third approach of implementing method overloading is based on the sequence of parameters in overloaded methods.

Consider the following example of the method declaration,

Now the float parameter appears first while the int parameter is second. We can achieve method overloading, by changing the parameter order.

The below Java program demonstrates this.

In the above program, we have a print param overloaded method that has int and char parameters whose order is changed in two method declarations.

So far we have discussed method overloading using a parameter list. We have not yet considered the return type of method. Note that we do not overload methods based on return types.

For instance, if two methods have the same name and same parameter lists but different return types, then we don’t say that these two methods are overloaded. This case becomes invalid for overloading.

So if we have the following declarations:

So when we compile this program, we get the below output.

The above compilation error indicates that the method is declared twice. This means that the compiler does not consider these methods overloaded merely based on the return type.

Operator overloading is an overloading mechanism in which a different meaning is given to an existing operator.

As we have discussed in the introduction section of this tutorial, an addition operator ‘+’ is a classic example of operator overloading.

When the operands of this operator are numeric, then the + operator returns the total of two values. But when the operands are of String type, then the result of the addition operation is the concatenated string. Note that In Java, we can only overload the + (addition) operator.

Hence operator overloading support is limited in Java unlike in C++ wherein we can overload almost all the operators barring a few like sizeof, dot operator, etc.

The below program demonstrates Operator Overloading in Java.

In the above program, we have overloaded the ‘+’ operator. When we pass two integer values to the overloaded method, a sum of two integers is returned and when two Strings are passed the result is the concatenated string.

Certain points are to be noted regarding overloading and compile-time polymorphism.

Q #1) Why do we need Polymorphism in Java?

Answer: Polymorphism allows us to have many implementations for one object. Through method overloading, we need not have too many methods with different names which are difficult to remember. We can instead have overloaded methods so that we can have a clear implementation of the methods performing similar functions.

Also overriding aids in the proper implementation of inheritance that allows us to add more functionality to the existing classes in an easier manner.

Q #2) What is Polymorphism OOP?

Answer: The Object-oriented programming definition of polymorphism refers to the ability of the programming languages to implement one object in various forms. Polymorphism is also defined as the ability of a program to override the methods from the parent class into the derived class to have additional functionality.

Q #3) Can we overload and override the main method?

Q #4) Can Constructors be Overloaded?

Q #5) Why is Method Overloading useful?

Answer: We can write clean code using method overloading and it also becomes readable as we have methods with the same name. So if we are implementing functionality for various data types, then we can overload the methods and it will be easier to separate the code.

Runtime polymorphism is performed at runtime and is dynamic. It is implemented using method overriding.

In this tutorial, we have seen the ways to implement method overloading. We have also discussed operator overloading in detail. Java supports the overloading of the ‘+’ operator only.