This tutorial explains how to achieve Runtime Polymorphism in Java using Method Overriding and @override annotation with simple examples: 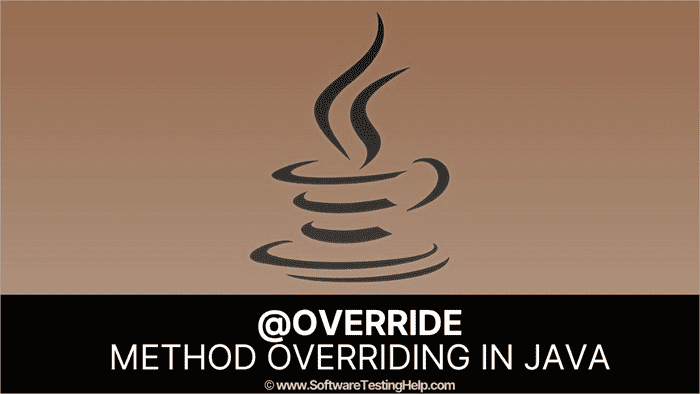 A runtime polymorphism which is also known as dynamic polymorphism or Dynamic Method Dispatch is a technique in which an overridden method call is resolved dynamically at runtime.

Runtime polymorphism in Java is achieved by using “method overriding”. Method overriding is a technique by which a method in the parent class is redefined or overridden in the child class.

When the method is overridden in a class, the dynamic method dispatch technique resolves the overridden method call at runtime and not at compile time.

Method overriding is the approach we use to achieve runtime polymorphism in Java. As already mentioned, method overriding is a technique in which subclass adds a method that is already present in its parent class and adds new functionality to this method. Then we say that the base class method is overridden.

The new method we defined in the subclass with the same prototype as the method of the parent class but different implementation is called the “overriding method”. The method in the parent class is known as the “Overridden method”.

We usually call the overridden method through the base class’s reference. We will create a reference of type base and then assign a child class object using the new keyword.

Thus it depends on the contents of the reference variable or which object is referenced by the base class reference that determines which method is to be called. So if the reference objects point to the object of the child class, then the overriding method is called.

Otherwise, if the reference object contains a base class object then the overridden method is called. One topic we need to be clear in runtime polymorphism especially for dynamic method dispatch is “Upcasting” which is explained below. 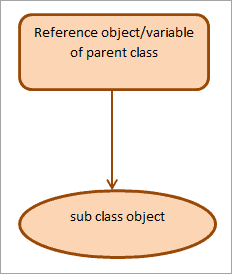 Consider that we have a class ‘BaseClass’ and we extend this BaseClass to create a new class DerivedClass. This structure looks as shown below.

Now to implement upcasting we will declare a reference variable of type BaseClass. Next, we assign an object of DerivedClass to the reference of class BaseClass as done in the below code statement.

So here we can say that we have upcast the DerivedClass object to BaseClass. As far as runtime polymorphism is concerned the concept of upcasting is very important.

Thus in general, upcasting is the process of assigning child or subclass objects to the reference of a parent or superclass.

The Java program below demonstrates method overriding and also shows how upcasting is performed to resolve overridden method calls at runtime.

First, we assign it an object of the Parent class and then call the “Print() “ method. Then we repeat this by assigning first the child1 object and then the child2 object to the Parent reference.

The output shows, depending on the contents of the parent reference, and the appropriate Print method is called.

Virtual function or method in Java is a feature that is used with Runtime polymorphism. Unlike C++, Java doesn’t have a special ‘virtual’ keyword to denote that a method is virtual. A method that is defined in the base class and overridden in the derived class is virtual.

In Java, by default, every non-static method except for private and final is a virtual function. So note that the methods we discussed above overriding to implement runtime polymorphism are also virtual methods.

As the static method is bound to Class and cannot be called using an object, it cannot be used with runtime polymorphism and it is also not a virtual function.

Remember that since methods in an interface are designed to be overridden, all interface methods are virtual functions.

For example consider the following code:

In the above code, the method accelerate () is a virtual function as it is a part of the interface car and is designed to be overridden.

Secondly, by using the @override annotation we make the code more readable. We can at once realize that the method being declared is to be overridden.

The general syntax of Java @override annotation is

The below Java program shows the usage of @override annotation.

If we had not implemented the display () method in the Derived class, then the compiler would have given a compiler warning as it is marked with @override annotation.

Overloading And Overriding In Java

Now that we have discussed both overloading and overriding in Java, let’s summarize these two concepts.

Operator overloading in Java is limited and it allows us to overload only the ‘+’ operator which is used to add two numbers and concatenate two String objects.

Overloading is resolved at compile time and is static. It is also called ‘Early binding’.

Method Overriding is a feature using which we implement runtime polymorphism. In method overriding, a method of the parent class is overridden in the child class. This means, that the method prototype in both super and subclass remains the same but the implementations are different.

Method overriding uses the dynamic method dispatch technique to resolve the method call and decide whether to call a superclass or subclass method and this is done at runtime.

Next, let’s tabularize the differences between overloading and overriding in Java.

Overloading Vs Overriding In Java

Q #1) Can we override the static method?

Answer: No. Static methods cannot be overridden in Java. This is because static methods are class-based and are called by class directly. They don’t need objects to invoke at runtime. Hence the static method dispatch is determined by the compiler.

Q #2) Can we override constructor?

Answer: No, we cannot override a constructor. A constructor is called when the object is created. It is not called an object. Also, one of the requirements of overriding is the overridden method and the overriding method should have the same method signature which is not possible in the case of constructors.

Q #3) Why is method overriding called as Dynamic Polymorphism?

Answer: In the case of method overriding, the method call is resolved dynamically at runtime. Hence it is called dynamic polymorphism.

Q #4) What is the use of Dynamic Polymorphism in Java?

Answer: Dynamic polymorphism uses a dynamic method dispatch technique that supports method overriding so that the subclass can provide specific implementation to the overridden method. This way we can implement the specific features that allow us to write efficient programs.

Secondly, we also need not worry about resolving method calls as dynamic method dispatch decides which method to call.

Q #5) What is the difference between Static and Dynamic Binding?

In this tutorial, we have discussed runtime polymorphism in Java in detail.

By using method overriding we can provide specific implementation to the same method in the subclass. This way, we can write more efficient programs that involve inheritance. Java provides @override annotation to indicate that the method is to be overridden.

By default, all non-static methods that are not final are virtual in Java. All virtual methods can be overridden.