Read This Article To Understand the Differences & Similarities Between C# Vs C++ And C# Vs Java. Choose Correct Programming Language For Your New Project:

In the software testing world where we have hundreds of programming languages, it really becomes a very difficult decision to choose a language while setting up a new project.

Once selected it may be very hard to switch from one language to another, hence it’s better to have a clear understanding of the features and limitations of a particular language based on your requirement and the functionality of the application. 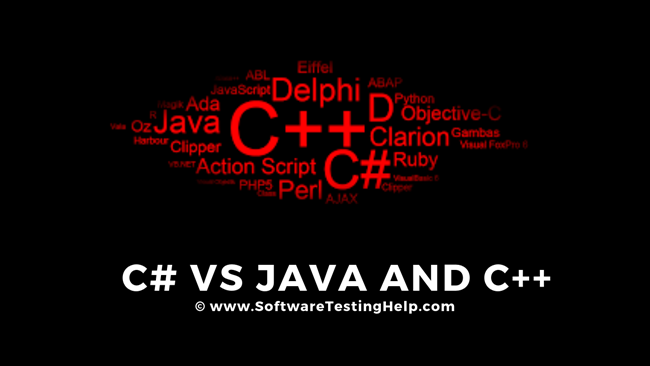 To help you make an informed decision we are here with a simple comparison between the three famous programming languages C#, C++ and Java.

At a very minute level, both the languages are almost the same. Both C# and C++ are object-oriented programming languages and both can be used for desktop or web applications.

C++ is very useful if you require better control of your PC/server hardware but if your prime aim is to develop a web or desktop application then C# could be your language of choice.

Similarities Between C# And C++

Differences Between C# Vs C++

C# is comparably slower than C++ as it has to compile with different libraries. C# applications are mostly used where we don’t have to bother about the performance of the application. C++ is a high-level language that is very fast but not as efficient.

For applications where performance is more important than the efficiency like network applications, C++ is a preferable language.

The C# programming language mainly uses Windows as a platform. C++ supports a wide range of platforms including Mac and Linux apart from Windows.

Tabular Comparison Of C++ Vs C#

In a nutshell, as both C# and C++ have different features and advantages, the selection of the language should be done based on the project requirement. If your project requires hardware interaction and performance over efficiency then the most eligible language will be C++.

If you are looking for a language that can be used to develop Web, Desktop or Mobile application then C# will be more useful.

C# is mainly used for building Windows applications and games. It is also used for efficient web development. It is also increasingly becoming famous for mobile development. C# has multiple features and most of the complex tasks like garbage collection or memory management have been abstracted out.

Java is a portable language i.e. code written on any platform will run on another platform. A Java Virtual Machine is created inside the Java Runtime Environment to convert the byte code to machine code. The compiler converts Java code into byte code.

Similarities Between C# And Java

Both these languages don’t allow different typecasting and throw an exception at the compile time. The optimized use of memory and garbage collection is another area where both perform similarly. Both Java and C# allow only a single inheritance to remove any redundancy.

Abstraction and Interface are other similar features of both these languages.

Difference Between C# Vs Java

There are a lot of similarities between Java and C# but the basic difference between them is the purpose. C# came as a desire for Microsoft to have its own language similar to Java. Java gets support from a large open-source community.

#2) Java needs JDK installed on the machine to run. C# requires .Net framework for providing huge libraries for use.

#3) Java is used for developing complex web applications whereas C# is useful for both web and game development. Mobile development with C# is also very popular.

#5) Java offers a clear distinction between exceptions like checked and unchecked. On the other hand, C# just offers a single type of exception.

#6) Due to its open-source nature, Java has a vast library ecosystem that helps in developing the functionality quite swiftly. C# libraries are restricted to the Microsoft ecosystem hence they have only limited functionality.

Tabular Comparison Of Java Vs C#

Java being backed by a large community is constantly evolving by creating new frameworks and libraries and even several tools. Some other languages like Groovy have also emerged based on Java. Android, based on Java has also become one of the most popular mobile OS.

C# is mainly used for the .Net framework-based implementations. The applications developed on C# work better with Microsoft environment and with each upgrade new libraries and tools that bring the same efficiency to the other environments are added.

C# and Java have several similarities and quite a few differences. The choice of the language between these two for application development will mostly boil down to platform dependency. But at the end of the day, both have a similar feature and the decision of selection should be evaluated based on use, platform, requirement, and ease of maintenance.

=> Read Through The C# Guide For Beginners Here