What Is Build Verification Testing (BVT)?

Build Verification Test is a set of tests run on every new build to verify that build is testable before it is released to test team for further testing.

These test cases are core functionality test cases that ensure the application is stable and can be tested thoroughly. Typically BVT process is automated. If BVT fails that build is again get assigned to a developer for the fix. 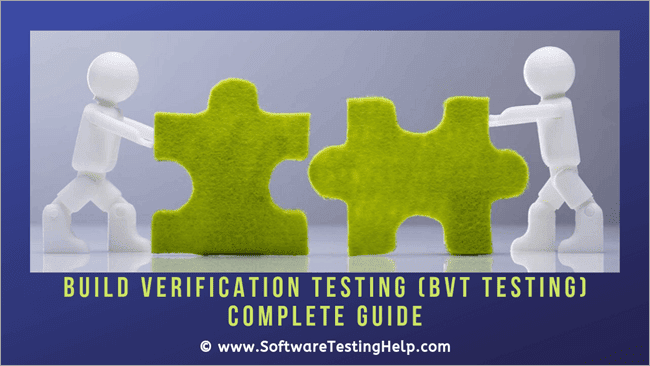 BVT primarily checks for the project integrity and checks whether all the modules are integrated properly or not. Module integration testing is very important when different teams develop project modules. I heard many cases of application failure due to improper module integration. Even in the worst cases, the complete project gets scrapped due to failure in module integration.

What is the main task in Build Release? Obviously file ‘check-in’ i.e. to include all the new and modified project files associated with respective builds. BVT was primarily introduced to check initial build health i.e. to check whether – all the new and modified files are included in the release, all file formats are correct, every file version and language, flags associated with each file.

These basic checks are worth before build release to test team for testing. You will save time and money by discovering the build flaws at the very beginning using BVT.

Which Test Cases should be included in BVT?

This is a very tricky decision to take before automating the BVT task. Keep in mind that the success of BVT depends on which test cases you include in BVT.

Here are some simple tips to include Test Cases in your BVT Automation Suite:

Also, do not includes modules in BVT, which are not yet stable. For some under-development features, you can’t predict expected behavior as these modules are unstable and you might know some known failures before testing for these incomplete modules. There is no point using such modules or test cases in BVT.

You can make this critical functionality test cases inclusion task simple by communicating with all those involved in project development and testing life cycle. Such a process should negotiate BVT test cases, which ultimately ensure BVT success. Set some BVT quality standards and these standards can be met only by analyzing major project features and scenarios.

For Example, Test cases to be included in BVT for Text editor application (Some sample tests only):

These are some sample test cases, which can be marked as ‘critical’ and for every minor or major change in the application, these basic critical test cases should be executed. This task can be easily accomplished by BVT.

BVT automation suits need to be maintained and modified time-to-time. E.g. include test cases in BVT when there are new stable project modules available.

What happens when the BVT Suite run?

Say Build verification automation test suite executed after any new build.
#1) The result of BVT execution is sent to all the email ID’s associated with that project.
#2) The BVT owner (person executing and maintaining the BVT suite) inspects the result of BVT.
#3) If BVT fails then BVT owner diagnose the cause of failure.
#4) If the failure cause is the defect in build, all the relevant information with failure logs is sent to respective developers.
#5) Developer on his initial diagnostic replies to the team about the failure cause. Whether this is really a bug? And if it’s a bug then what will be his bug-fixing scenario.
#6) On bug fix once again BVT test suite is executed and if the build passes BVT, the build is passed to test team for further detail functionality, performance, and other tests.

This process gets repeated for every new build.

Why did BVT or Build Fail?

BVT breaks sometimes. This doesn’t mean that there is always a bug in the build. There are some other reasons to build fail like test case coding error, automation suite error, infrastructure error, hardware failures etc.
You need to troubleshoot the cause for the BVT break and need to take proper action after diagnosis.

#1) Spend considerable time writing BVT test cases scripts.
#2) Log as much detailed info as possible to diagnose the BVT pass or fail result. This will help the developer team to debug and quickly know the failure cause.
#3) Select stable test cases to include in BVT. For new features, if new critical test case passes consistently on different configuration then promote this test case in your BVT suite. This will reduce the probability of frequent build failure due to new unstable modules and test cases.
#4) Automate BVT process as much as possible. Right from build release process to BVT result – automate everything.
#5) Have some penalties for breaking the build ;-) Some chocolates or team coffee party from a developer who breaks the build will do.

BVT is nothing but a set of regression test cases that are executed each time for the new build. This is also called a smoke test. The build is not assigned to the test team unless and until the BVT passes.

BVT can be run by developer or tester and BVT result is communicated throughout the team and immediate action is taken to fix the bug if BVT fails. BVT process is typically automated by writing scripts for test cases.

Only critical test cases are included in BVT. These test cases should ensure application test coverage. BVT is very effective for daily as well as long-term builds. This saves significant time, cost, resources and after all no frustration of test team for the incomplete build.

If you have some experience in BVT process then please share it with our readers in comments below.