This tutorial will explain primitive data type Java Double. We will also discuss related classes like Java BigDecimal and DecimalFormat Class with examples:

In this tutorial, we will explore the double data type with the help of syntax and programming examples.

Java decimal format and big decimal classes are explained here with some frequently asked questions that will help you in understanding the double data type clearly. 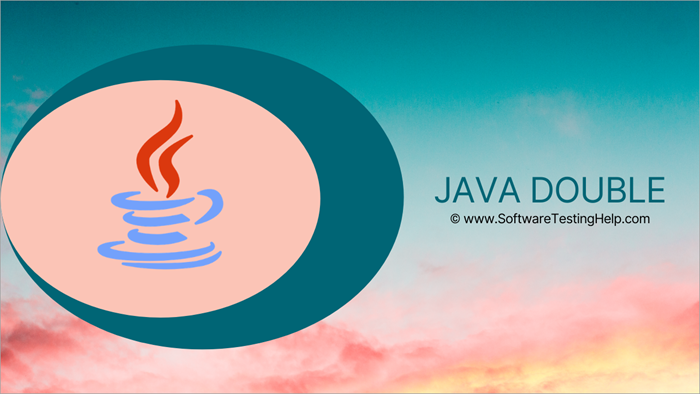 As we all know, Java has eight primitive types i.e. int, short, long, byte, float, double, char, and boolean. The Java double is one of the primitive data types whose width and range is more than float.

Suggested reading =>> How to convert double to int in Java

Java double is used to represent floating-point numbers. It uses 64 bits to store a variable value and has a range greater than float type.

In this example, we are calculating the square root of the area of a rectangle. We have taken length and breadth as integer and calculated the area which is of type integer.

Java has a special class called DecimalFormat that is used to format the numbers. This formatting is customizable.

In the below example, we have defined a pattern delimited by comma ‘,’ and a decimal number of type double. Using this pattern or format, we are going to display our input number.

We have passed the pattern into the Decimal format class and we have formatted the output using the reference ‘df’.

This is again a special Java class that provides simple arithmetic operations on the number (add, subtract, multiply and divide), rounding off the result, format conversion, and so on.

Let’s look at the below example to understand this better.

Rounding off the number

In the below example, we have demonstrated the difference between the simple subtraction of decimal and the subtraction through the Big-Decimal class.

Finally, we printed both the values and you can see the difference between them. The calculated value of Big Decimal was automatically rounded-off.

Q #1) How many bytes does a double type take?

Q #2) What is MathContext in Java?

Answer: The MathContext is a class in Java that specifies the rounding-off number mode and precision. It provides immutable objects and is also responsible for imposing certain rules for the operators that are implemented by Big Decimal class.

In the below example, we have initialized a double variable and set different rules of rounding the digits. This works in accordance with the output specifier that we have passed.

Answer: Yes. Every time when we do a certain operation in Big Decimal, they return a new object instead of modifying the already created objects.

Q #4) What is the difference between float and double?

Answer: Enlisted below are the differences between float and double.

Answer: A Math class is a class in Java that contains all the methods that are used in mathematical operations. It has two double constants i.e. E (2.72) and pi(3.14).

For example, sin(), cos(), tan() methods of trigonometry. sqrt(), log(), pow() methods of exponential. A programming example on pow() is already covered above (Java double example).

In this tutorial, we have explained the double primitive type with an appropriate example. We have also included DecimalFormat and BigDecimal Java with programs.

Frequently-asked questions are also included in various areas of the double type such as range, width, size, Math class, etc.