This Tutorial Explain C# Classes and Objects. You will Learn About C# Class Members, Base Class, Methods, Parameters and Parameter Types with Examples:

Data Type Conversions in C# were explained in detail in our previous tutorial. In this tutorial, we will explore all about Classes and Objects in C# in detail.

Similar to most of the object-oriented programming languages C# also has inbuilt support for classes and objects. 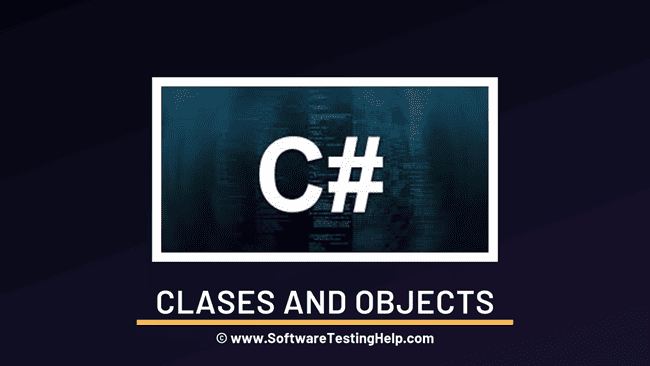 Classes And Objects In C#

An object in a programming language is similar to a real-world object. Object-Oriented Programming is a concept where the programs are designed using sets of classes and objects to simplify program development and maintenance.

A class is a logical collection of similar kinds of objects. It is one of the most fundamental types in C#. It is basically a data structure that is a combination of Methods, Functions, and Fields. It provides the definition for the dynamic instances i.e. objects that need to be created for the class.

For Example, if you are collecting data for a student in an application. There can be several properties of a student like a roll number, class, section, subject, etc. Each of these properties can be termed a property of student class and the student can be considered as a collection of all these properties.

So, here a class represents student i.e. the collection of objects and student attributes/properties can be termed as its objects. We will study these in detail in upcoming topics. 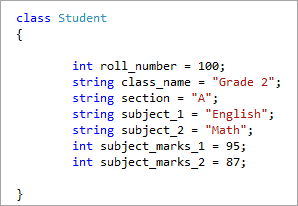 A class can also have methods. A method defines the operations that can be performed inside a class.

Let’s create an operation to perform the simple summation of marks. To perform this we will create a main method inside the class.

What Did We Do In The Above Code Snippet?

We created a class of the name “Student”. Then we created some data variables with different values. We then created a “total_marks” integer variable where we stored the summation of marks of both subjects.

Sometimes the terms class and object are used interchangeably but both are different entities. A class is the definition of the object but it’s not the object itself. The object is also known as an instance of the class. Class instances are created by using “new” operator. A new operator allocates memory for an instance and invokes a constructor to initialize it and returns a reference object.

For Example, if we want to create an instance for the class student then,

Here we have created an instance of class “Student” and we have defined “stu” as a reference object.

Let’s have a look at some of the class members:

What Is A Base Class?

A base class may be specified by using the keyword class followed by class name and type parameters along with a colon followed by the base class. 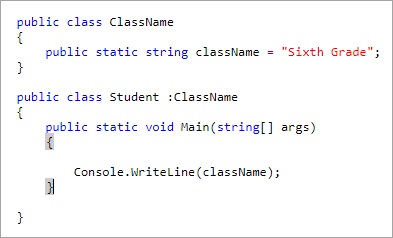 We will discuss more on inheritance in our upcoming tutorials.

Methods can also contain parameters that signify variable references being passed to the method. A method may also contain a return type that denotes the computational end product/value of the method that can be returned.

Some points to remember while working with the method are:

Parameters are the values or reference variables that are passed to the method. Parameters receive their values from arguments that are specified while invoking a particular method.

Different Types Of Parameters Are:

In most of our examples, we will be using either reference type or value type.

Let’s look at these in detail.

A reference parameter is used when you want to pass an argument via reference. This means that the argument pass as a parameter to the method should be a variable with a value and during execution, it should represent the storage location of the value of the variable.

Given below is an Example to understand Class, Object, Methods, and Parameters better. 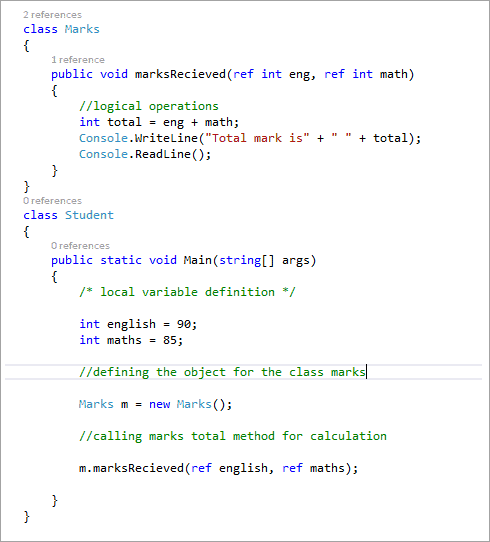 What Did We Do In The Above Code Snippet?

Next, we have a class Student that contains the main method from which we will be calling the method from the Marks class. Before we make a call to the method we need to create an instance of the class Marks.

Once we have created an instance for the class we can use this instance to call any method present inside the previous class. As we have declared a reference parameter in the method we will need to pass a reference variable. To do that, we use the declared object followed by a dot and then the name of the method that you want to access from the class instance.

The parameters are passed inside the bracket that is placed just after the method name. A semicolon is stationed at the end to denote the end of the line.

Classes are the blueprint of a user-defined data type. It is used to group similar objects together. Objects are entities that define data and functionality. Objects are the runtime entity and are created to access all the members of the class.

The new class is declared by using the class declaration that starts with the keyword “class” followed by the name of the class. It can also specify modifiers or attributes of the class. All the members of the class are declared between two curly braces “{“ and “}”.