This tutorial will help you to learn Data Mart concepts in detail along with simple examples. 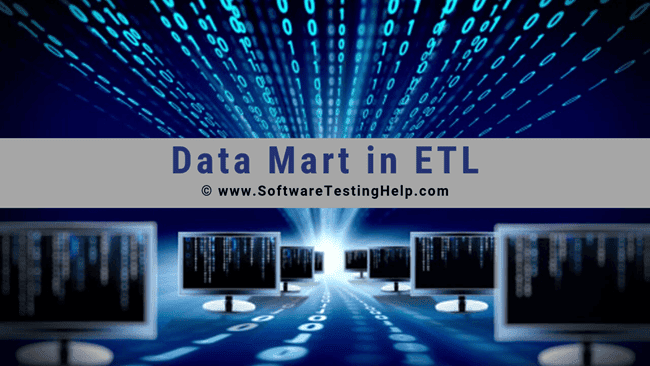 What Is A Data Mart?

A data mart is a small portion of the data warehouse that is mainly related to a particular business domain as marketing (or) sales etc.

The data stored in the DW system is huge hence data marts are designed with a subset of data that belongs to individual departments. Thus a specific group of users can easily utilize this data for their analysis.

Unlike a data warehouse that has many combinations of users, each data mart will have a particular set of end-users. The lesser number of end-users results in better response time.

Data marts are also accessible to business intelligence (BI) tools. Data marts do not contain duplicated (or) unused data. They do get updated at regular intervals. They are subject-oriented and flexible databases. Each team has the right to develop and maintain its data marts without modifying data warehouse (or) other data mart’s data. 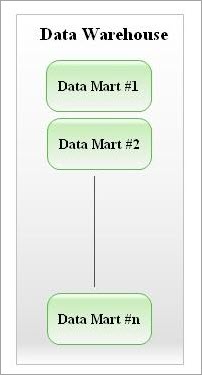 When Do We Need Data Mart?

Based on the necessity, plan and design a data mart for your department by engaging the stakeholders because the operational cost of data mart may be high some times.

Consider the below reasons to build a data mart:

A cost-effective data mart can be built by the following steps:

The cost of data mart can be estimated as follows:

Data marts are classified into three types i.e. Dependent, Independent and Hybrid. This classification is based on how they have been populated i.e. either from a data warehouse (or) from any other data sources.

Extraction, Transformation, and Transportation (ETT) is the process that is used to populate data mart’s data from any source systems.

Let’s take a look at each type in detail!!

In a dependent data mart, data is sourced from the existing data warehouse itself. This is a top-down approach because the portion of restructured data into the data mart is extracted from the centralized data warehouse.

A data mart can use DW data either logically or physically as shown below:

ETT is a simplified process in the case of dependent data marts because the usable data is already existing in the centralized DW. The accurate set of summarized data should be just moved to the respective data marts.

An Image of Dependent Data Mart is shown below: 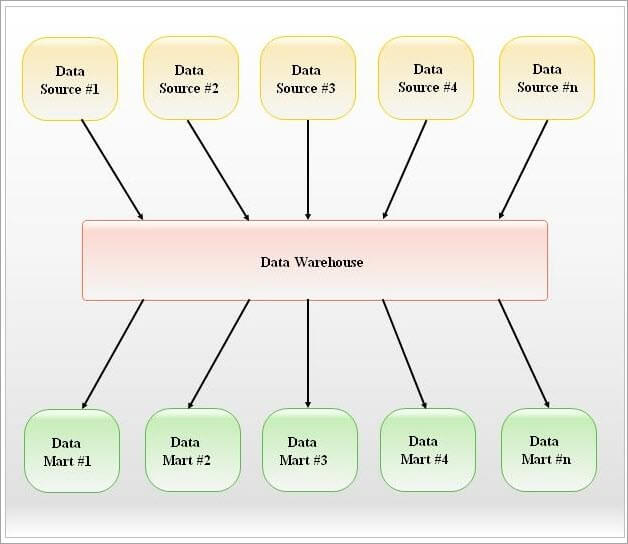 Independent data marts are stand-alone systems where data is extracted, transformed and loaded from external (or) internal data sources. These are easy to design and maintain until it is supporting simple department wise business needs.

You have to work with each phase of the ETT process in case of independent data marts in a similar way as to how the data has been processed into centralized DW. However, the number of sources and the data populated to the data marts may be less. 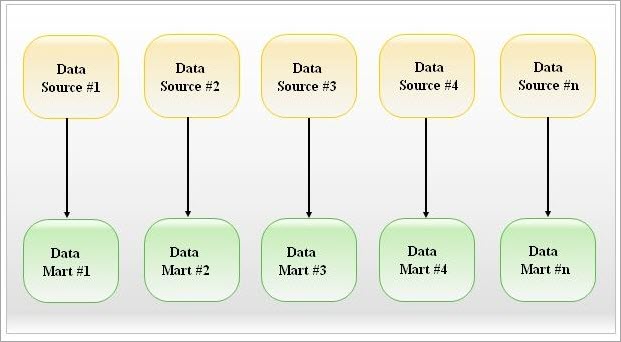 In a hybrid data mart, data is integrated from both the DW and other operational systems. Hybrid data marts are flexible with large storage structures. It can also refer to other data marts data. 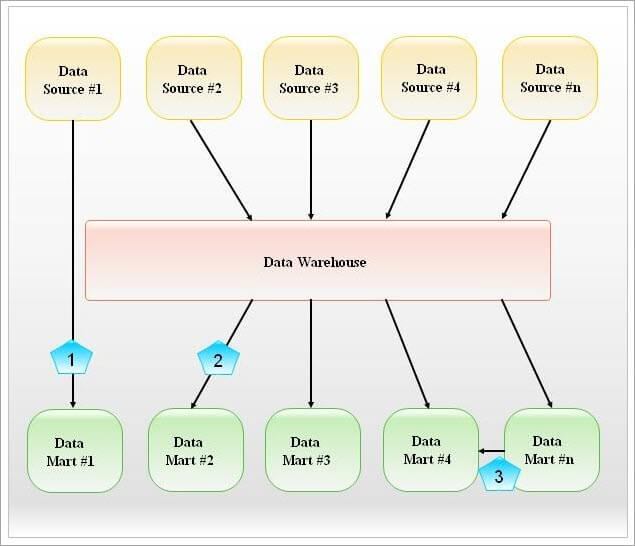 Implementation Steps Of A Data Mart

The implementation of Data Mart which is considered to be a bit complex is explained in the below steps:

Structure Of A Data Mart

The structure of each data mart is created as per the requirement. Data Mart structures are called Star joins. This structure will differ from one data mart to another.

Star joins are multi-dimensional structures that are formed with fact and dimension tables to support large amounts of data. Star join will have a fact table in the center surrounded by the dimension tables.

Similar to the DW system, in star joins as well, the fact tables contain only numerical data and the respective textual data can be described in dimension tables. This structure resembles a star schema in DW. 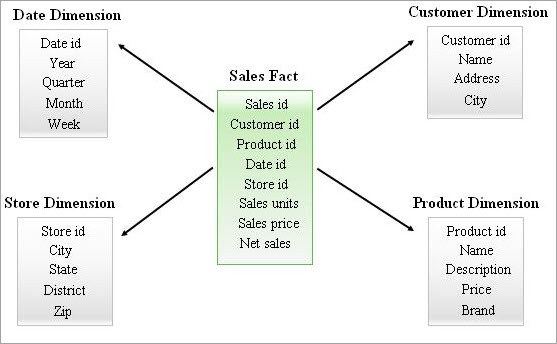 But the granular data from the centralized DW is the base for any data mart’s data. Many calculations will be performed on the normalized DW data to transform it into multidimensional data marts data which is stored in the form of cubes.

This works similarly as to how the data from legacy source systems is transformed into a normalized DW data.

When Is A Pilot Data Mart Useful?

A pilot can be deployed in a small environment with a restricted number of users to ensure if the deployment is successful before the full-fledged deployment. However, this is not essential all the time. The pilot deployments will be of no use once the purpose is met.

You need to consider the below scenarios that recommend for the pilot deployment:

Though data marts have some benefits over DW they also have some drawbacks as explained below:

Many organizations are gearing towards data marts from a cost-saving perspective. Hence this tutorial has focused on the technical aspects of data marts in the data warehouse system.

Metadata in ETL is explained in detail in our upcoming tutorial.

=> Visit Here To See The Data Warehousing Training Series For All.