This Tutorial Explains Static Keyword in Java and its Usage in Variables, Methods, Blocks & Classes. Also States the Difference Between Static & Non-static Members:

Java supports various types of declarations to indicate the scope and behavior of its variables, methods, classes, etc. For Example, the keyword final, sealed, static, etc. All these declarations have some specific meaning when they are used in the Java program.

We will explore all these keywords as we proceed with this tutorial. Here, we will discuss the details of one of the most important keywords in Java i.e. “static”. 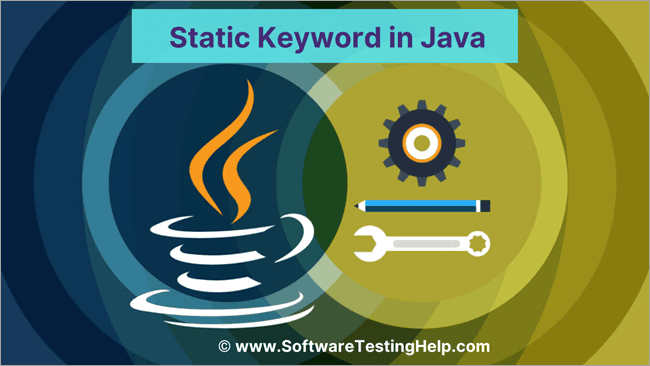 A member in a Java program can be declared as static using the keyword “static” preceding its declaration/definition. When a member is declared static, then it essentially means that the member is shared by all the instances of a class without making copies of per instance.

Thus static is a non-class modifier used in Java and can be applied to the following members:

When a member is declared static, then it can be accessed without using an object. This means that before a class is instantiated, the static member is active and accessible. Unlike other non-static class members that cease to exist when the object of the class goes out of scope, the static member is still obviously active.

A member variable of a class that is declared as static is called the Static Variable. It is also called as the “Class variable”. Once the variable is declared as static, memory is allocated only once and not every time when a class is instantiated. Hence you can access the static variable without a reference to an object.

The following Java program depicts the usage of Static variables:

Why Do We Need Static Variables And Where Are They Useful?

Static variables are most useful in applications that need counters. As you know, counters will give wrong values if declared as normal variables.

For instance, if you have a normal variable set as a counter in an application that has a class say car. Then, whenever we create a car object, the normal counter variable will be initialized with every instance. But if we have a counter variable as a static or class variable then it will initialize only once when the class is created.

Hence even if you create a hundred objects of the class car, then the counter as a normal variable will always have the value as 1 whereas, with a static variable, it will show the correct count of 100.

Given below is another example of Static counters in Java: 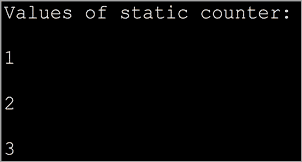 In the main function, we create three objects of the class counter. The output shows the value of the static variable each time when the counter object is created. We see that with every object created the existing static variable value is incremented and not reinitialized.

A method in Java is static when it is preceded by the keyword “static”.

Some points that you need to remember about the static method include:

The following program shows the implementation of the static method in Java:

This is a simple illustration. We define a static method that simply prints a message. Then in the main function, the static method is called without any object or instance of a class.

Another Example of Static keyword Implementation in Java.

In the above program, as you can see we have two methods. The method printStaticis a static method while inst_print is an instance method. We also have two variables, static_count is a static variable and b is an instance variable.

In the static method – printStatic, first, we display a message and then we try to change the value of the instance variable b and also call the non-static method.

Next, we try to use the ‘super’ keyword.

When we execute the program with the above lines, we get compilation errors for using instance variables, calling non-static methods and referring super in a static context. These are the limitations of the static method.

When we comment on the above three lines, only then the above program works fine and produces the following output.

Overloading And Overriding Of Static Method

As you all know, both Overloading and Overriding are the features of OOPS and they aid in polymorphism. Overloading can be classified as compile-time polymorphism wherein you can have methods with the same name but different parameter lists.

Overriding is a feature of run time polymorphism and in this, the base class method is overridden in the derived class so that the method signature or prototype is the same but the definition differs.

Let us discuss how Overloading and Overriding affect the static class in Java.

You can overload a static method in Java with different parameter lists but with the same name.

This program has two static methods with the same name ‘static_method’ but a different argument list. The first method does not take any argument and the second method takes a string argument.

One point to note is that you cannot overload the method merely depending on the ‘static’ keyword. For Example, if you have an instance method ‘sum’ and if you define another method “sum” and declare it as static, then it is not going to work. This attempt to overload based on a “static” keyword is going to result in a compilation failure.

As static methods are invoked without any object of the class, even if you have a static method with the same signature in the derived class, it will not be overriding. This is because there is no run-time polymorphism without an instance.

Hence you cannot override a static method. But if at all there is a static method with the same signature in the derived class, then the method to call doesn’t depend on the objects at run time but it depends on the compiler.

You have to note that though static methods cannot be overridden, the Java language does not give any compiler errors when you have a method in the derived class with the same signature as a base class method.

The following implementation proves this point.

In the above program, you can see that the static method that is called does not depend on which object the pointer points to. This is because objects are not at all used with static methods.

Just as you have function blocks in programming languages like C++, C#, etc. in Java also, there is a special block called “static” block that usually includes a block of code related to static data.

This static block is executed at the moment when the first object of the class is created (precisely at the time of classloading) or when the static member inside the block is used.

The following program shows the usage of a static block.

Note the order of execution of statements in the above program. The contents of the static block are executed first followed by the main program. The static variables sum and val1 have initial values while val2 is not initialized (it defaults to 0). Then in the static block val2 is still not assigned a value and hence its value is displayed as 0.

The variable val2 is assigned value after printing in the static block and the sum is recalculated. Therefore, in the main function, we get different values of sum and val2.

In Java, you have static blocks, static methods, and even static variables. Hence it’s obvious that you can also have static classes. In Java, it is possible to have a class inside another class and this is called a Nested class. The class that encloses the nested class is called the Outer class.

An example of a static nested class is given below.

In the above program, you see that the static nested class can access the static variable (string) from the outer class.

As you know, we usually include various packages and predefined functionality in the Java program by using the “import” directive. Using the word static with the import directive allows you to use the class functionality without using the class name.

In this program, we use static import for java.lang.System class.

Note: In the main function, we have just used out.println to display the message.

Although the static import feature makes code more concise and readable, it sometimes creates ambiguity especially when some packages have the same functions. Hence static import should be used only when extremely needed.

Let us discuss the major differences between Static and Non-Static members of Java.

Enlisted below are the differences between Static and Non-Static variables.

Given below is the difference between Static and Non-Static methods.

Static and Final are two keywords in Java that can give special meaning to the entity that it is used with. For Example, when a variable is declared as static, it becomes a class variable that can be accessed without a reference to the object.

Similarly, when a variable is declared as final, it becomes immutable i.e. a constant.

Let’s tabularize some of the major differences between Static and Final keywords in Java.

Answer: Whenever you want a data member in your program that should keep its value across the objects, then you should use static. For Example, a counter. A method can be declared as static when you do not want to invoke it using an object.

Q #3) Can a Static Class have a Constructor?

Answer: Yes, a static class can have a constructor and its purpose is solely to initialize static data members. It will be invoked only for the first time when the data members are accessed. It will not be invoked for subsequent access.

Q #4) What is the use of Static Constructor?

Answer: In general, the constructor is used to initialize static data members. It is also used to perform operations/actions that need to be carried out only once.

Answer: Yes, static methods in Java are inherited but are not overridden.

In this tutorial, we discussed the static keyword of Java in detail along with its usage in data members, methods, blocks and classes. The static keyword is a keyword that is used to indicate the class level or global scope.

In our subsequent topics, we will explore more keywords and their significance in Java language.